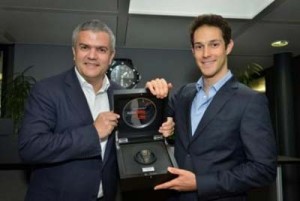 Ayrton Senna has often been voted as one of the greatest Formula One drivers of all time in various motorsport polls.

He was recognised for his qualifying speed over one lap and from 1989 until 2006 held the record for most pole positions.

He was also acclaimed for his wet weather performances, such as the 1984 Monaco Grand Prix, the 1985 Portuguese Grand Prix, and the 1993 European Grand Prix. The unveiling event was in the presence of Bruno Senna (June, 2013), a nephew and heir of Ayrton Senna’s family together with his mother. Ricardo Guadalupe, CEO of Hublot was on hand to present the watch.

Following on from the phenomenal success of the first Big Bang Senna presented in 2007, the Big Bang Foudroyante Senna presented in Tokyo in 2009 and the King Power Ayrton Senna presented at the São Paulo Grand Prix in 2010 to celebrate the 50th anniversary of the driver’s birth, we can now celebrate Ayrton’s 41 victories and 3 championship titles with a super limited edition of 3 models with only 41 pieces each.

Ricardo Guadalupe welcomed Bruno, himself a professional driver with a striking similarity to his uncle, who had made the journey especially for the occasion. He was given a tour of the workshops, where he saw the very first MP-06 Senna models in production. He showed considerable interest in the processes, asking the watchmakers technical questions about the design of the watches. This piece, produced in honour of the Brazilian icon, is the most complicated Hublot watch to date.

Only 3 models with 41 numbered pieces each will be produced – a mark of exclusivity to further strengthen the long-standing relationship between Hublot and the Senna family. As ever, a large part of the sales revenue will go directly to the family. Stylish and powerful, in King Gold or Titanium or black PVD Titanium, the MP-06 Senna has a tonneau case. Its expertly openworked sapphire dial reveals the manufacture tourbillon movement, which is entirely designed, developed and produced by Hublot’s engineers and watchmakers. 155 components with 5-day power reserve.

The Senna brand logo (in yellow, green or red depending on the version) appears as a transfer at 9 o’clock on the sapphire dial. The watch comes in a special Hublot presentation case with a perfect miniature reproduction of Ayrton Senna’s helmet design in 88, 89 and 91.