When we first read Tom Rubython’s outstanding biography on Ayrton Senna, we learned for the first time that he was a divorcee before he entered Formula 1. In fact, aside from the constant figures of his mother Nede and sister Viviane, there were actually three very significant women in his life. 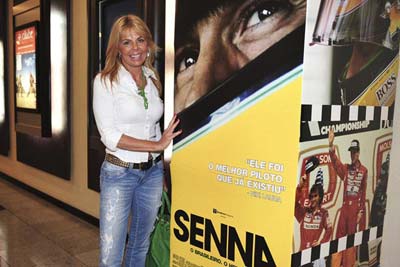 In February 1981, Senna was married to Liliane Vasconcelos, then a 19-year-old who was a childhood friend of Ayrton’s. But the marriage lasted just two years, with Liliane finding that life in England as the wife of an aspiring Formula 1 driver wasn’t all it was cracked up to be.

After a season in British Formula Ford in 1981, the pair moved back to the UK to give their marriage a chance to survive, while Ayrton contemplated whether he should remain in motorsport or work for the family business. In the end, he did return to the UK in early 1982, and the marriage last a few months more before the pair quietly divorced. Despite their marriage being so long ago, Liliane still has a strong relationship with the Senna family, although her role in Senna’s life is never mentioned in the SENNA documentary. She now works as a successful interior designer.

After separating with Liliane, Senna dated a few other women – although none was hugely serious – until he met Brazilian TV presenter, actress and singer Xuxa Meneghel. The pair dated on and off for five years between 1988 and 1992, although she rarely accompanied him to Grands Prix because of her TV schedule.

Despite Xuxa having not been a part of Ayrton’s life for some time before his death, she was cast as the official widow at his funeral having been adored by the Senna family. In fact, at the Brazilian premiere of the SENNA documentary, she was snapped with Senna’s sister Viviane on the red carpet .

Adriane Galisteu met Ayrton Senna at the 1993 Brazilian Grand Prix while working a PR role for McLaren sponsor Marlboro. She was just 21 when he died, and having accompanied him across the globe for the last year of his life. She later wrote a book titled “My Life with Ayrton”. She enjoys a highly successful role as a TV presenter.