Ayrton SENNA as a rally driver

It happened in 1986, two years before conquering the first of three world titles in Formula 1. Then 26 years old, Ayrton Senna tested several machines rally in Wales for a material of Cars and Car Conversions magazine. The Brazilian then got behind the wheel of first Ford Sierra RS Cosworth cars and, Vauxhall Nova Sport, Volkswagen Golf GTi, Ford Escort MG Metro 6R4 or 4WD, and in the end did not hesitate to express their impressions about the power of dedicated rally copies.

The poignant and utterly brilliant Senna movie has become a box office sensation, but what few people realise is the fact that the Brazilian Formula One World Champion was also a rally driver – for one day 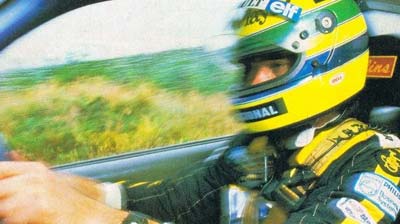 In 1986, while he was employed by the Lotus team, Senna tried out a diverse group of rally cars in Wales for a feature in the now-defunct Car and Car Conversions magazine.

He sampled everything from a two-wheel drive Vauxhall Nova (similar to the car in which Colin McRae made his name) to the incredible Group B Austin Rover Metro 6R4. Also on his tasting menu were a Ford Sierra RS Cosworth and a homemade 3.4-litre four-wheel drive Ford Escort.

The reason why? In Senna’s own words: “I know nothing about rallying. I’ve seen the pictures in magazines, sometimes watched it on television. And I deliberately haven’t listened to anyone about rally driving. I want to find out for myself.”

On his very first run in the mighty Sierra, he nearly went off on the first corner. Not exactly what he was expecting. “It is …surprising,” he commented drily. “Because I really went into the first corner like a normal car. It was stupid. Now I understand why you have to use opposite lock and use the traction a bit – to keep the car really biting on the ground. If you try to just go round, you don’t go round. You just go straight on.”

Senna wasn’t exaggerating: he knew so little about driving rally cars that he didn’t even bring driving gloves, expecting the experience to be similar to a road car. By the end of the day there blisters across his palms, and he found it hard to understand just how the cars could take so much punishment from the loose gravel. But he loved the whole experience and just like Kimi Räikkönen 25 years later he found it hard to draw any comparisons with Formula One.

The only thing he still needed to work on was his British geography, although to be fair this was the first time that the Brazilian had ever been to darkest Wales. “Apart from the races that I did, testing or anything, this was probably the best day I ever had in England,” he concluded. “Outside of the races I did, that is. For fun, this was the best day.” Sadly, Senna never got the chance to drive a rally car again. But for those privileged enough to watch him test that day, there was no doubt that Senna had everything it took to go straight to the top of the WRC.