Nothing happens by chance

Everything is part of a universal plan that was carefully prepared to improve human nature, inasmuch as all of the actions that we take, one by one, are endowed with an independent intelligence of their own and they communicate together to guarantee the harmony of the evolutionary process for all beings.

It may seem unlikely, or maybe not. Most likely there were twelve famous people gathered there together. Two of the guests, who fit the same description, were at the centre of attention. “The moment has arrived to begin our work”, the person who seemed to be in control began explaining: “It is a country lost in the deviances generated by unexpected modernity thanks to the indifference of a powerful class that dominates without thinking of the risks they produce for the majority, and for themselves. It contains everything necessary to lose direction and become absorbed by behaviours that will wind up overcoming that spiritual purity it was granted at the act of creation. You will arrive the tenth month of 1958 and you – pointing at the other guest – the third month of 1960, but you must return no later than the fifth month of 1994. You are expected by a prosperous and financially stable couple”.

They say that at 300 kilometres per hour the spirit is ready to separate from the body without any difficulty and that is why it is an extremely special and extraordinarily pleasant sensation.Brazilian Ayrton Senna da Silva used to say “I have racing and competition in my blood: it is part of my life”. He always wanted something more than victory. He had already had 41 wins and three Formula 1 World Championships. He wanted something greater than perfection; he desired the impossible, or rather, he was willing to pay by risking his life. 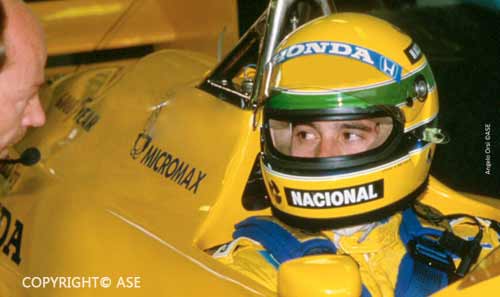 One year earlier he confessed, “Death is part of my life. I am afraid of dying, but I have learned to live with that fear and it intrigues me”. The victories that he won from the first year of his career seemed out of place in the reality of the child who had suffered from motor skill problems. Whenever he would eat an ice cream cone, he would get two, because one always wound up on the ground. Later a neurologist would diagnose him with motor skill coordination problems that would soon disappear, and they did, right after he convinced his dad to give him his first car: a pedal kart.

Ayrton Senna made his first appearance at the wheel of a Formula 1 race car in July 1983 during a test run on the Donnington track in England. The vehicle he was testing that day was a Williams, as was the vehicle he was driving the day he died. It is a complex twist of fate, if not downright uncanny. Like most race car drivers, Senna had a good sponsor: his father. Milton da Silva always provided sufficient resources to cover his son’s expenses, but suddenly that “patronage”, as race car drivers referred to support from their parents, ended. It is said that it was the only time in his life that Senna considered taking a different path. He returned to Brazil because his father had cut off his funding and was afraid that something might happen to him while he was racing. Despite that Aryton decided to return to Europe with an airplane ticket and a thousand dollars in his pocket, which he had been given by the president of the Brazilian Automotive Confederation to help him realise his dream.

In 1972, when Emerson Fittipaldi won his first world championship title, the television network Globo decided to transform Formula 1 racing into a national passion, broadcasting live throughout the country. The Formula 1 championship had always had high viewer ratings, especially when there was a Brazilian driver in the race with a chance of winning. In Senna’s case that can be demonstrated statistically. In September 1992, the director of communications from McCann-Erickson evaluated just how much interest people had in that driver. In the 1992 world championship, the peak audience reached 24 percent when English driver Nigel Mansell won the championship title. When Senna was in good standing that peak reached thirty percent, which is equal to 6 million television viewers who watched the race just to seem him compete.

Senna returned the Brazilians’ pride, which was felt by few in those days, as they saw their nation mirrored in the colours of the flag that Senna raised every Sunday, or almost, and that is without considering the emotion of winning a race – the sense of being Brazilian soared in the people’s hearts. After the driver’s death they found an Austrian flag in his car. Ayrton Senna had been planning on raising it, if he had won, in honour of Austrian Roland Ratzenberger, a colleague who had completed his mission, who had died the day before. Coincidentally he died just a few hours before Senna and from this point of few it is clear that in this dimension we may know nothing more.

After his death, Sundays were no longer the same in Brazil and a deep persistent sadness fell over the people’s spirit. The work carried out by these people at every social level was imbued with strong feelings of hope as they awaited victory from San Paolo’s idol. It was the absence of that feeling that it became necessary to live with after that fateful day in Imola, Italy. Two months before his death, Ayrton Senna confessed to his sister Viviane that he would have liked to do something for the less fortunate, but he did not know where to begin. It would be Viviane Senna, a psychologist specialised in mental health, who would give substance to her brother’s dream.

The Ayrton Senna Institute founded by the driver’s family, has received around one hundred million dollars over the past years from sponsor companies for investments in social works and projects in association with schools, governments, NGOs and private individuals.
Ten years after its founding, the Institute had already invested around ten million dollars in educational projects destined to reach around a million children and young people in 463 municipalities in 25 Brazilian states involving just fewer than 51,000 volunteer teachers in over 3,300 schools. The most well known program Acelera Brasil increased the promotion rate in public schools involved by 96%.

The Institute is supported by royalties from the driver’s publicity rights as well as the Senna, Senninha and Senninha Baby trademarks, which had already reached 3 million US dollars in their second year. The Senna trademark has always been associated with high quality advanced technology products such as the Ducati motorcycle, which was designed for the driver, the Montegrappa pen and even Off-Shore racing boats, Carraro bicycles and titanium eyeglasses with gold plating. The Tag Heuer watch collection dedicated to the driver was completely sold out just a few days after it was launched.

Viviane has been part of the Institute presidency since its founding. The beginning was not easy because two years after her brother’s death, her husband and the father of her three children, businessman Flávio Pereira Lalli, died in a motorcycle accident – yet another complex twist of fate. Viviane worked through her pain by throwing herself relentlessly into her work. She still dedicates 10 to 12 hours a day to her work.