On November 1, 1987, Ayrton Senna had his first Formula One race in Japan. The Suzuka raceway, where the Brazilian driver won his three world titles (1988, 1990 and 1991), was hosting the category for the first time, and Senna stood out in the race due to his amazing recovery: he started in seventh place and finished in second with his yellow Lotus. 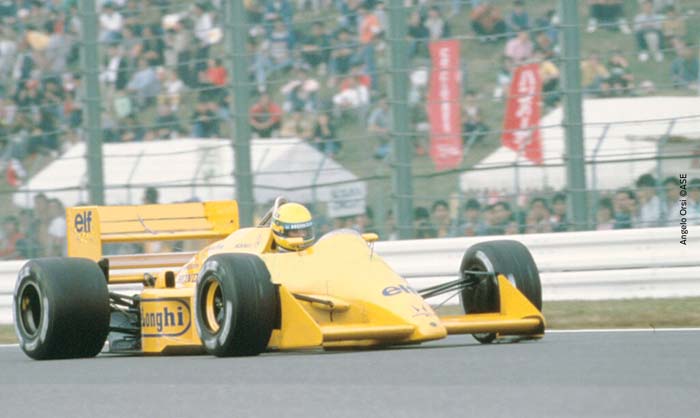 All signs pointed to a historic duel in Japan, between Nigel Mansell and Nelson Piquet, both of them Williams drivers, who were fighting for the season’s title. When the Briton crashed during the practice sessions, however, Piquet became champion even before the start of the race, since the “Lion” wasn’t able to take part in event.

Since the fight for the title was settled, the spotlight fell on Senna and Ferrari’s Gerhard Berger, who had the pole position and won the race. Ayrton had one of his best starts ever in F1, jumping from seventh place to fourth even before the first corner. Senna overtook Piquet, Teo Fabi (Benetton) and Michele Alboerto (Ferrari). Halfway through the first lap, Alain Prost had a puncture in one of his McLaren’s tires and Senna became third.

On the 12th lap, Ayrton passed Thierry Boutsen (Benetton) to take the second place. From then on, the Brazilian had to worry about Piquet, and was able to defend himself from his fellow countryman for 40 laps, until Nelson’s car started leaking oil, forcing him to retire. With a better pit-stop strategy, Swede Stefan Johansson (McLaren) overtook both Brazilians after a tire change, but Senna was able to catch up to him, since his tires were less worn-out by the final stretch of the race.

With less than five laps to go, Senna was still ten seconds behind Johansson. The Lotus driver picked up the pace and shaved around two seconds per lap, until overtaking the Swede at the start of the final lap – to the delight of the Japanese crowd, who was rooting for the car with a Honda engine.

With a good performance from his Ferrari throughout the entire race, Berger won with a 17-second advantage over Senna, who finished in second place, just 0s310 ahead of Johansson. The Japanese were just getting to know the man who would become the country’s most beloved driver, and who would make history at Suzuka in the very next year.