When he debuted in the most important motor racing category, Formula 1, Ayrton Senna carried with him an important legacy of the triumphs of many other Brazilian drivers who had won races and titles such as Emerson Fittipaldi, Nelson Piquet.

In 10 years, he won 3 championship titles, 41 wins, made 80 podium appearances and 65 pole positions in the 161 Grands Prix he raced which made him a worldwide hero. He first drove a Formula 1 car in 1983 when he tested the Williams FW07 of champion Keke Rosberg. The test left a good impression but his first team in the category would be Toleman, with whom he debuted in 1984. 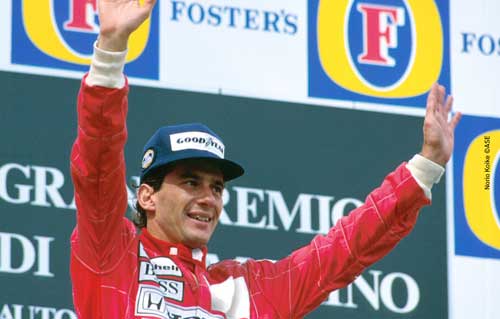 Even with a car from a lesser known team in the Formula 1, Ayrton Senna did well, winning important podiums and impressing everyone with his performance in Monte Carlo, where he didn’t win the race only because the race organizers decided to end the race one lap before he passed Alain Prost. Between 1985 and 1987, Ayrton Senna drove the legendary Lotus which had already won titles with Brazilian drivers.

With this car, he won his first victories in the category – six wins during this period – and took various poles. It was time to go after the championship.

The first title came in 1988, the year of his debut with McLaren and which was marked by an intense rivalry with his team mate Alain Prost. What could have been a partnership was in reality, one of the greatest rivalries the sporting world had seen: two great drivers that fought curve by curve and race by race for victory. In the following years, the two dueled again for the title with Alain Prost winning in 1989, after the disqualification of Ayrton Senna and the Brazilian in 1990 after bumping the Frenchman in the first lap of the Japanese Grand Prix.

Other great rivalries marked the victories of Ayrton Senna: Nigel Mansell was a tough adversary especially when his Williams showed itself to be superior to the McLaren cars in 1991. The Brazilian was, however, able to secure the title for that year through sheer determination – the third of his career. Ayrton Senna stayed with McLaren until 1993. With them, he had 35 wins in six years including his last triumph in the Australian Grand Prix in 1993. But more than this: this driver did not just write a few more pages in the history of world motor racing.

His name will always be remembered by competitors, technical specialists, and above all race fans, from those embraced the Brazilian flag for a season to the passionate fans of the teams that rivalled Ayrton Senna on the track.

The greatest driver the category has ever known.