Ayrton Senna came to Europe in 1981, at the age of twenty-two, to begin his open wheel racing career competing in British Formula Ford 1600. By the end of the season he had established himself as the man to beat, winning the two prestigious national British Formula Ford titles. 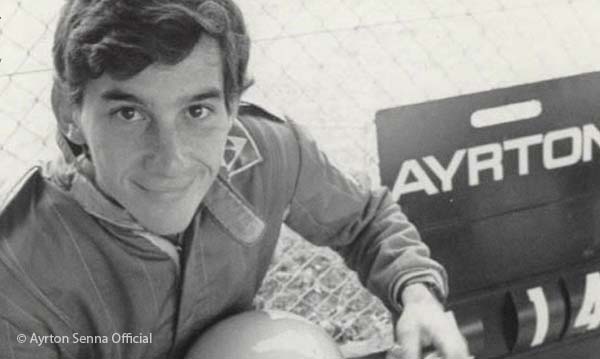 Keith Sutton takes up the story:

“For some reason I decided to go down to Brands Hatch the following weekend on the train using a free British Rail promotion ticket that was obtained after saving tokens from boxes of Kellogg’s Cornflakes.” Keith remembers. “I had just arrived at the Brands paddock when Senna approached me after recognising me from Thruxton. He asked me why I had been taking photographs of him. ‘Are you a professional photographer?’ he enquired. ‘Yes of course,’ was my reply. ‘Well I need photographs to send over to Brazil on a regular basis. Can you help me out?’ Naturally I agreed but only under the condition ‘that you pay me!’”

Early spring weather in England is unpredictable at best and that week in March would see heavy rain, particularly on race day. Senna and his wife, Liliane, were still new to England and the cold and damp weather came as an unwelcome surprise to them as both were far more at home in the tropical weather of Sao Paolo. Senna’s Formula Ford race went ahead despite the wet conditions and those present at Brands Hatch that day were to witness history in the making that day, albeit unknowingly, as the small cars that were capable of 125mph, were to race around 15 laps of the shorter Indy Circuit.

After winning his qualifying heat Senna would start the final from pole position. At 4:30pm the cars took to their allotted grid positions and when the lights went out Senna was seen to pull away as the cars rushed towards Graham Hill Bend in a wall of spray. Senna was invincible and took victory by 9.4 seconds from Mexican Alfonso Toledano. The emotional Brazilian was met with a kiss from Liliane in parc ferme and joined her husband on the podium to celebrate his first victory in a car.

Keith Sutton was also on the podium capturing all the emotions of this historic moment and remembers: “He won his heat, then he won his race and there I was on top of the rostrum doing the shots – fantastic light, him and his wife. Briliant