As predicted, the weeks between the Japanese and Australian Grands Prix were filled with hearings, press-conferences, announcements, claims and counter-claims. “Jean-Marie Balestre just wants to give his fellow Frenchman the title”, said Senna, threatening to boycott the Australian race and retire from F1 altogether. “Not so,” said FISA, following a hearing in Paris, “and besides, here are some more examples of dangerous driving by Senna – so we’re going to increase the fine and give you a six-month ban as well!”. Ron Dennis said “We’ll keep fighting Senna’s corner, but right now we’re concentrating on the next race”. He also alleged that the Suzuka stewards’ report had been substantively altered before being presented in Paris and denied once again that his support of Senna was in no way favouritism towards the driver staying with him for 1990 against the one leaving. 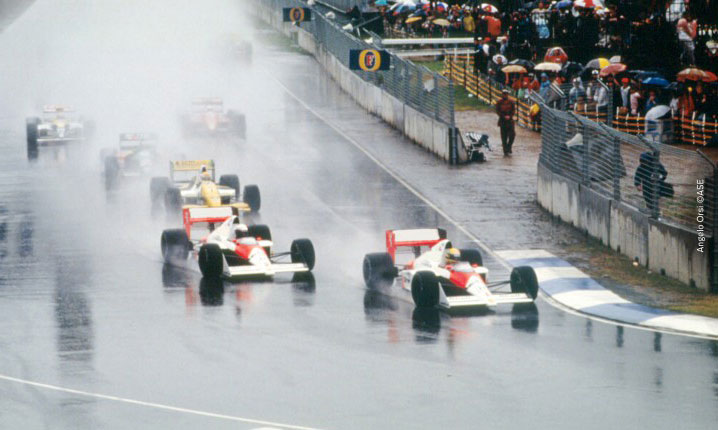 Amid this acrimonious atmosphere, the teams arrived down under for what had become a traditional end-of-season knees-up. The sun was shining on Thursday when the 13 minnows headed out onto the track for pre-qualifying. To no-one’s great surprise, both Zakspeeds failed to make the cut – making it 16 out of 16 for Aguri Suzuki – and instead both Osella drivers made it to Friday’s sessions along with Lehto and Alliot. Perhaps as a sign of the times, the two drivers who just missed out were former Ferrari team-mates Johansson and Alboreto. After the session, a satisfied Piercarlo Ghinzani announced that he would be retiring at the end of the season – this would be his 111th entry and, if he qualified, his 76th start.

Qualifying saw Prost ahead on Friday, but Saturday’s session was cooler and Senna put up a stunning sub-1.17s lap to take his 13th pole of the year with Prost second. Pierluigi Martini – back in the Minardi after his break in Japan – put up an equally stunning lap to claim third alongside Sandro Nannini with the Williams cars of Boutsen and Patrese on row 3. The Ferraris were suffering from a multitude of setup and mechanical problems leaving Mansell seventh and Berger back in 14th (one rumour had Ron Dennis popping his head around the neighbouring Ferrari garage door and jokingly offering Berger the use of the spare McLaren). Lotus had an equally troubled session with Piquet 18th and Nakajima 23rd in their last races for the team. Arnoux brought up the rear of the grid and announced his own retirement from Formula One at the driver’s meeting, with the Rials, Sala and Jonathan Palmer failing to qualify (the first time all year for the Tyrrell driver). Just 24 seconds before the end of Saturday’s session, Cheever had a huge shunt in his Arrows as he ricocheted off a kerb and smacked the wall.

Sunday dawned cool and damp and, after the morning free practice session, the heavens opened. For hours the rain lashed down and an additional half-hour session was organised for the teams to change their setups for the race – during which several Image result for 1989 adelaide startdrivers, including Prost, Berger and even rainmaster Senna, went aquaplaning off the circuit. Prost and Berger, along with Nelson Piquet, suggested both to the organisers and the media that the race be postponed for a few hours as the rain was forecast to ease off later. Senna was notably silent – with his disqualification in Japan still under appeal, he needed to win here in order to win the title if his points were restored. He also told Thierry Boutsen, who came to sound him out, that he felt as a contracted driver he was duty-bound to race. Prost, by contrast, declared his intent to do one lap and retire, should the race be run.

It was. The pleas of the drivers fell on deaf ears and, half an hour late, the grid assembled and set out, gingerly, on a formation lap. As the grid reassembled, the green lights came on early and away they went, ready or not. Prost got away better than Senna while Martini fishtailed wildly on his Pirelli wet tyres which were much inferior to the Goodyears. Senna retook the lead without any resistance form Prost, but all was chaos behind. Grouillard slid off, nearly collecting Arnoux on the way; Piquet and Modena had moments, then Lehto wiped out after the first chicane, leaving his car stranded in the middle of the road. The race had to be stopped and everyone tip-toed back round to the pits. The arguments recommenced; some drivers wanted to abandon the race, some wanted to restart. Bernie Ecclestone was trying to encourage everyone to race, and after another half-hour delay they lined up again – minus Prost, who refused to take the restart.

At the restart, Martini had the measure of his Pirelli wet tyres and, with no Prost in front, got very close to taking the lead but it was Senna that went through first, putting him in a advantageous position. With a clear view and his knack for the conditions, he had a nine-second lead by the end of lap one, but soon the Williams pair and Nannini (who had started badly) were past Martini and giving chase. From there it became just a lottery of who could stay on the circuit. Apart from Larini’s Osella which had stalled on the grid, the first casualty of the conditions was Arnoux, who ended his career on a flat note, nudged onto the kerb by Cheever on lap 5. Alesi’s electrics failed on lap 6, then on lap 7 Berger and Alliot tangled in midfield and both were out. Warwick clouted a wall when running seventh on lap 8.

On lap 12, Senna was already lapping backmarkers, but between the reduced visibility, reduced control and a smidge of bad luck, he hit Brundle’s Brabham and put both himself and the Brabham out, leaving Boutsen leading Patrese and Nannini. De Cesaris spun out on the same lap in an unconnected incident, and the following lap Capelli went out with a radiator leak. The casualties continued mounting up: Mansell spun into retirement after 17 laps, Piquet clobbered Ghinzani’s Osella the following lap (and took a flying wheel to the helmet for his trouble – fortunately to no ill effect. , Grouillard spun for the second time on lap 23 and Lehto had an electrical failure on lap 28. There were now just nine runners left and the race hadn’t even reached half its allotted distance.

Unsurprisingly, those who were left were those who were driving cautiously and from there the race proceeded rather tentatively to its conclusion – the last retirement was Cheever on lap 43, spinning after having driven most of the race with a chunk of someone else’s front wing stuck in his sidepod. Patrese spun, allowing Nannini through, but recovered to keep third. As the two hour limit approached, Boutsen was being held up by Pirro, ignoring blue flags while his team-mate Nannini closed in to within a couple of seconds. But it was not to be – Boutsen took his second win of the year with Nannini second and Patrese third to cement Williams in second place in the table. Nakajima signed off his Lotus career on a high with a best-ever fourth place with Pirro fifth and Martini sixth. Mauricio Gugelmin and Stefano Modena were the unlucky two who finished but didn’t score.

And that was it; the 1989 season ended on something of a damp squib. Prost was champion whatever happened with Senna’s appeal, and a number of drivers had had their last races for their current teams – or indeed altogether – cut undramatically short.

A pity, because it had been a cracker of a season. Pirro and Nakajima’s scores brought the total number of scoring drivers to an astonishing 29. Thierry Boutsen and Sandro Nannini had been popular additions to the roster of Grand Prix winners. Nigel Mansell had been an instant hit with Ferrari fans and there had been an epic title battle full of drama on and off track.