As a Formula One driver and a man, however, he more than deserved his share of the limelight. Twenty-fours hours after Ratzenberger was killed during practice for the 1994 San Marino Grand Prix, three-times world champion Ayrton Senna died in the race and, in the outpouring of grief for the Brazilian which followed, the Austrian was almost forgotten.

“Ratzenberger…was more tragic to me than Ayrton because he’d come up by his own efforts and the help of his family,” Max Mosley, President of ruling body the FIA at the time, told Reuters.

“He’d no money, he’d done it by his own work and he was a thoroughly good person.

“Ratzenberger’s death would have been a very big thing except Senna’s came the next day.”

Mosley had to make a decision about which funeral to attend.

“I went to Ratzenberger’s funeral rather than to Senna’s where all the great and good of Formula One were because I felt somebody needed to support him and his family,” Mosley said. Ratzenberger, who died at the age of 33, had to work hard to fulfil his dream of becoming a Formula One driver. He started out in German Formula Ford in 1983 and after spells in British Formula Three and the Touring Car championship, he moved to Japan in 1990. He enjoyed only moderate success in the Formula 3000 Championship but did enough to earn a five-race contract with the Simtek Formula One team in 1994. 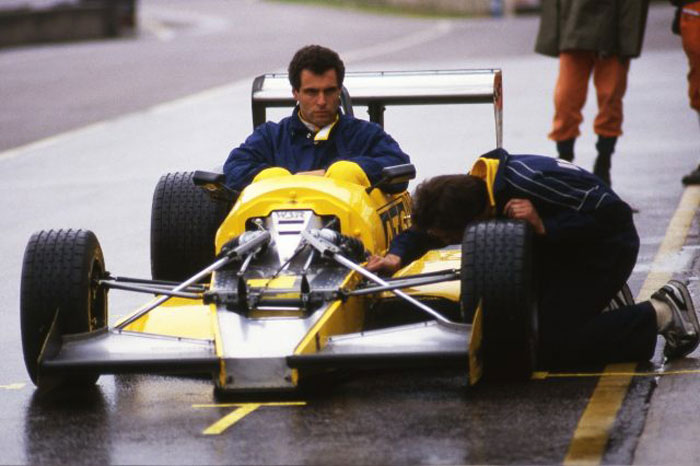 Ratzenberger failed to qualify for the Brazilian Grand Prix but finished 11th in Japan before arriving at the Imola circuit in Italy. During Saturday’s qualifying session, the front wing of his car was damaged after he went off track but he carried on driving because he was so desperate to claim the last spot on the grid. The front wing broke off and lodged under the car. Ratzenberger was unable to make the turn into the Villeneuve corner, named after the late Ferrarigreat who had died 12 years earlier in Belgium, and piled into the wall at 314.9 kph. He was pronounced dead on arrival at hospital.

Twenty-four hours later Senna lost his life. In the wreckage of his car, investigators found an Austrian flag he had been planning to wave at the end of the race.

“Roland is almost forgotten. Whenever I talk to people I never say Ayrton’s weekend…it’s always Ayrton and Roland. And I’d never forget that and I don’t want other people to forget it either.

Herbert was adamant that Ratzenberger was not the journeyman driver he is often portrayed as.

“He didn’t have a background of money and the early days was transit van and a trailer,” Herbert said.

“But he won one of the biggest races in a young driver’s career, the Formula Ford festival, and then he did Japan. But he always produced the goods. Sadly we never really saw the best of Roland. He wasn’t a journeyman type whatsoever, he was a very talented man.”

“He was someone I respected because he had pretty much followed a similar route to myself,” Damon Hill told Reuters.

“He’d got into Formula One at 31, quite late in his career, but he’d stuck at it. He’d clearly got talent but he didn’t shine like a Senna or a (Lewis) Hamilton. He was a guy who loved being a racing driver. He was talented, able and very competitive.”

Ratzenberger will also be fondly remembered for his personality.

“He was a wonderful man,” Herbert said. “He had a really nice, wicked sense of humour. You could always have a laugh and a giggle with him.”

Ratzenberger finished only one Formula One Grand Prix while Senna topped the podium 41 times, third on the all-time list, and will go down as one of the finest drivers in history.

“It was desperately sad because he (Ratzenberger) hadn’t had what Ayrton had,” Mosley said. “At least Ayrton had had the success, the brilliant recognition worldwide, the state funeral in Brazil and so on.