After coming so close in the two previous seasons, Alain Prost finally became the first Frenchman to win the World Championship. He clinched the title thanks to six wins and with two races to spare. At Zandvoort, McLaren team-mate Niki Lauda won by less than 0.3sec from Prost in his final year as a Grand Prix driver. 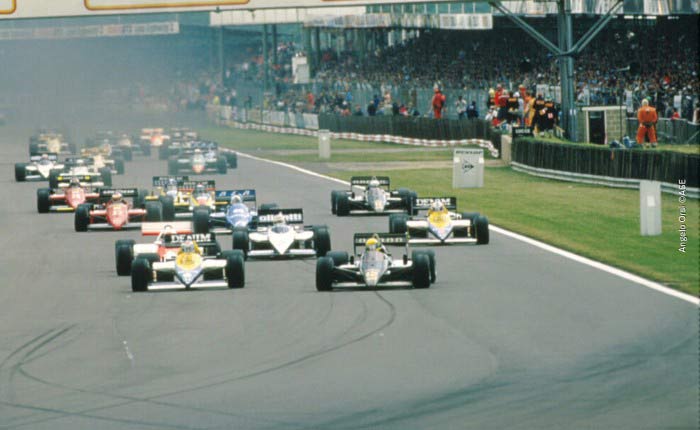 Prost’s closest challenger was Ferrari’s Michele Alboreto, who led the series after a winning the Canadian GP in June. But Prost re-established his supremacy on the quick circuits that followed, beating Alboreto by more than a lap at Silverstone. A series of three retirements finally ended Alboreto’s hopes. Ferrari replaced Rene Arnoux with the highly rated but underused Stefan Johansson after just one race. The Swede led at Imola but his race performances were often hampered by poor grid positions.

Ayrton Senna moved to Lotus and proved to be the quickest driver in Formula 1. Although he scored a tremendous first victory in the wet Portuguese GP, he was unlucky for most of the season and had to wait until September for a second win at Spa-Francorchamps. That meeting had actually started in June, but was postponed after first qualifying when the newly laid track surface broke up, rendering the course’s fast corners highly dangerous.

Senna’s Lotus team-mate Elio de Angelis managed one win (after Prost had been disqualified at San Marino) and a pole position, but he signed for Brabham at the end of the season after six years with the team. Pirelli supplied their tyres to Brabham and Nelson Piquet won in France but otherwise did not figure strongly in his final year with the team.

Williams-Honda was the quickest combination by the end of the season, with three successive victories. Nigel Mansell finally won his first Grand Prix at Brands Hatch after more than seventy unsuccessful attempts. He followed that up with victory in the South African GP, a race which some teams boycotted for political reasons. Keke Rosberg, who had previously won in Detroit, completed the Williams hat-trick at the final round, the first World Championship race to be held in Australia.

The Renault team withdrew from racing at the end of the season after nine seasons that had promised much but never quite delivered the title. They would continue to supply Lotus, Ligier and Tyrrell with their turbocharged engines. Toleman had a troubled season that was delayed by problems securing a tyre contract. The team was eventually bought by its sponsor, Benetton, and the cars would be renamed for 1986.