Imagine if Diego Maradona, when arriving in Europe in the 1980s, signed not for Barcelona but for Norwich City, turning them into championship contenders for several seasons. A little far-fetched? Perhaps. But it is a pretty solid analogy for what really did happen in the 1980s in the world of motor racing – right here in Norfolk. 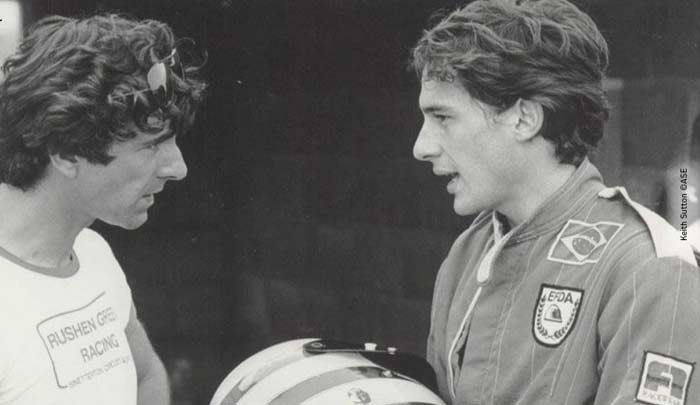 These were the days when Team Lotus competed at the highest level in Formula One from their South Norfolk base. When Lotus signed Ayrton Senna to drive for them in the 1985 season, it was just as great a coup as the Canaries gaining Maradona’s signature would have been. The talented South American in this case may have been from Brazil rather than Argentina, but the impact he was about to make on his sport was no less explosive.

“My father died at the end of 1982, and my mother decided to try to continue on with the team,” explains Clive Chapman, the son of Lotus founder Colin. “So Peter Warr, the team manager, was prepared to really shoulder the burden of trying to cope without dad. He then managed to persuade Ayrton Senna to come to Lotus when everyone else was trying to persuade him to go everywhere else!”

Clive runs Hethel-based Classic Team Lotus, maintaining a fleet of race-winning cars from the Grand Prix glory years. And it’s not just the cars – many of the personnel also worked for the original team. Among them is Chris Dinnage, who worked closely with Senna during his three seasons at Lotus.

“I think just as a racing driver, he was the most complete,” recalls Dinnage. “He knew what was going on around him all the time. I’ve never met anybody else who had that capacity – never mind another racing driver, but just another human being – to absorb that much information and store it and use it when he really needed to.”

Despite this intense focus, former Lotus chief mechanic Bob Dance remembers there also being a lighter side to Senna’s character.

“He got me in Rio,” says Dance, “offering sweets around to the lads, all friendly. And I said ‘Okay, what’s wrong with it?’ ‘No no,’ he said, ‘you have one of my sweets!’ So I ate his sweet, and he said ‘Let me see your tongue!’ So I showed him my tongue and it was bright blue! And he said ‘You know what? You’re gonna pee bright blue for a couple of days, so don’t be alarmed!’”

It’s now 23 years since Senna’s death in an accident at the 1994 San Marino Grand Prix. But the reason why he is still remembered so fondly in Norfolk isn’t simply down to his time with Lotus. He had actually first come to the county some years before that, living in a bungalow at Eaton in the early 1980s. He was drawn by the lure of driving for Ralph Firman, who ran the Van Diemen company, based at Snetterton. Van Diemen had a reputation for building the best cars in Formula Ford, the first step on the ladder for drivers with Grand Prix ambitions, and aspiring racers from across the globe flocked to drive Firman’s cars.

“We started to have two or three Brazilians along, one of them being Chico Serra, who won the championship,” remembers Ralph. “He was with me in ’78, and he kept on about this driver who was doing fantastic things in Europe, karting. So I waited two years for him to come along, Ayrton, and he decided to race one of our cars.”

“I had my workshop at Snetterton, and I walked across from the pits and there was a Formula Ford race on. And there was this yellow-and-black car in the lead, and all the rest were just really really close. Then it started to rain, so I just carried on walking, and the next time I looked the black-and-yellow car was half a lap ahead. I’m always on the look-out for the next driver, so I walked back, the race finished, and there was this black-and-yellow car with ‘Ayrton Senna da Silva’ on it.”

After dominating Formula Ford in 1981, Senna moved up to the more powerful Formula Ford 2000 category in 1982, driving one of Ralph Firman’s cars for Dennis’s team.

“He could do stuff that really used to wind me up!” Dennis laughs. “He could test his car, come in, and say ‘I’ve been looking in my left-hand mirror, and the left-rear tyre needs two pounds of pressure more in it.’ I can’t tell you what thoughts were in my head! But what was really really annoying was, he was right!”

For 1983, Senna moved up to Formula Three – and also decided to change his name to the one that would soon become world famous, as Dennis remembers.

“He walked into my office one day, and there was this picture of a man up a ladder in Brazil. And he said ‘He’s called da Silva.’ And I asked ‘what’s wrong with that?’ He said ‘Da Silva? That’s like Smith. I’m not going to be called that any more – I want everything changed to Ayrton Senna!’”

In Formula Three, Senna fought a season-long tooth-and-nail battle for the title with Martin Brundle from King’s Lynn, right down to the final race of the year. Such was the impact of the fight between the two young drivers that both went straight into Formula One for 1984. Senna joined the mid-ranking Toleman outfit, but it wasn’t long before bigger teams were chasing his signature, and he returned to Norfolk when Lotus successfully signed him up.

In the 23 years since Senna’s fatal accident at the Imola circuit on May 1 1994, much has been said and written about his later Formula One years, and the world titles won after leaving Lotus. However, the story of his electrifying rise up the motor racing ladder is perhaps overlooked. That’s why BBC Radio Norfolk decided that we should make a programme to commemorate Senna’s time in the county, and hear from those who knew and worked with him when he drove for our local teams. We’ve even brought back our former presenter Rob Bonnet as narrator. Rob is best-known now as a national BBC sports reporter, but he was there for us in the 1980s, reporting on Senna’s career at Lotus, and in the programme you can also hear from one of his own archive interviews with the Brazilian.

After I’d recorded the memories of Chris Dinnage and Bob Dance for the documentary, I was packing away my equipment, and chatting with the pair of them in Dinnage’s office at Classic Team Lotus. I thanked them for being so generous with their time, when Chris told me that it was fine, as “we never mind talking about Ayrton.”

Not all drivers would provoke such fond memories from their mechanics. But it’s another sign that, as well as being an icon to millions, there are plenty of people right here in Norfolk to whom Ayrton Senna was, first and foremost, someone they knew; a friend and a colleague. One who, sadly, would never have the chance to look back and reminisce from retirement about those good old days when he was just starting out.