All credit for this article goes to Raffaele Fumo

It is always like this when you talk about myths, and here we have two. The only thing I was sure about was that the article was not supposed to prove that Ayrton Senna and Ducati deserve that definition. Their names have been heard along many roads. Some of them have even had the privilege of being witness to their acts. The “battlefields”, the circuits, are known as their temples.

It may sound strange to the younger generations, or even exaggeration, to compare the past F1 drivers to the myths of Homer, fighting with swords or bare hands, for glory. Technology was almost absent from their cars, at the time, which demanded the bravery of the drivers. Just to make it clear those races were epic, we can look at what happened at the Grand Prix of Monaco, in 1984. 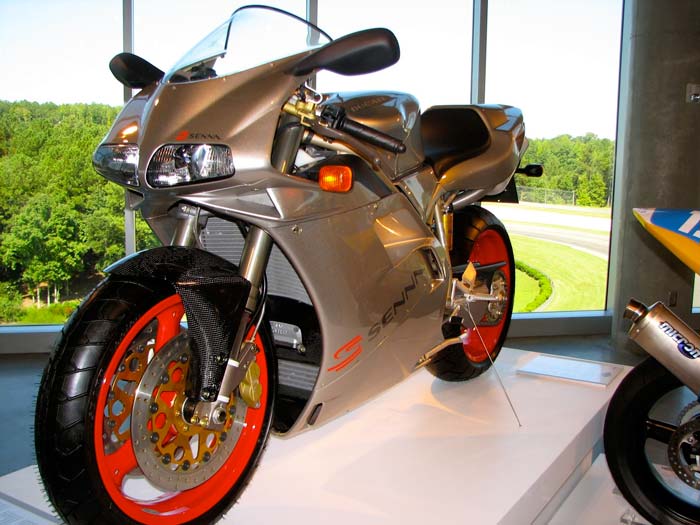 The deluge that fell down from the sky, that day, was torrential. It was impossible to race. The start got delayed by more than 40 minutes. Prost led the group of cars with caution. The perception of what was going to happen the very next second, in such conditions, was left to fate or God. The drivers behind Prost, one after another, started dropping out of the race, after spinning off or colliding, and we’re talking about Lauda, Patrese, Mansell, Fabi, and Warwick. Definitely not rookies.

The actual rookie had started in 13th position on the grid, but he was “sailing” (in some places seawater was even washing over the track, can you imagine?) towards Prost’s leading position, fast. Prost’s reprehensible decision to stop the race, fearing the attack from Senna at any moment, couldn’t stop the rise of Ayrton to the Olympus of F1. He finished second and furiously commented that he was unfairly stopped from winning.

“Magic” was born, that day. Probably the most gifted driver of all times. Actually the most intriguing and amazing one, ever. In other words, a myth. At times he was less of a god, making mistakes like others. He was always in search of his own limits, often beyond what was human, only to come close to the idea of being perfect. It was predictable that, despite their different “weapons” to fight for glory – Senna on four wheels, Ducati on two – our heroes had to meet, sooner or later.

Like ancient warriors, painting themselves before battles, in races – drivers, cars, and motorbikes – had to choose a color to represent them. Ayrton’s yellow helmet illuminated the tracks and the eyes of his fans for years. He had some Italian blood in him and I’m quite sure if at that time, Ferrari had been a reliable racing horse, he would have conquered lands, painted in red.

This red passion was shared by Ducati, the Ferrari of motorcycles. So it was only a matter of time before they would fall in love with one another, in the times of “peace”. I can still remember a picture in which Ayrton arrived at a party after the Grand Prix in Monaco, on his Ducati, dressed in smoking. It was well-known drivers were not supposed to take risks outside the circuits, but true love was beyond any rules.

This passion brought Ayrton to meet Claudio Castiglioni, at that time, Ducati’s Patron.

Castiglioni was touched and inspired by Senna’s commitment to helping the poor in Brazil and involved Ayrton in a new project; a collaboration on a new motorbike, giving part of the selling revenues to his Foundation. What happened next can still be seen today in the 916 Senna Model. Painted in charcoal gray and red color, as Ayrton chose himself. The model became reality a few months before the Imola’s bloody Sunday, in 1994, and was presented to the World in 1995, by Senna’s sister Viviane.

Produced only in 300 examples, the 916 Senna was sold out in a record time which convinced Castiglioni to produce the second and third versions of 916 Senna, in the late 90’s. Yet again as limited editions. In 2014, for the 20th anniversary of Ayrton’s death, Ducati and the Senna Foundation repeated the tribute to the Brazilian champion, by giving his name to a new version of the 1199 Panigale S. It was produced only in 161 models, the same number with Senna’s Grand Prix’s in F1. Not many, actually, but for our hero, enough to become immortal.

Glory or not, I can tell you I would have preferred Ayrton alive now, instead of being a myth.