Michael Schumacher paid tribute to Ayrton Senna at the circuit where the Brazilian driver was killed in a crash 10 years ago as the German chased him.

“It was a privilege for me to be able to race against him,” Schumacher, who won that 1994 San Marino Grand Prix, told a news conference before the fourth round of the season. 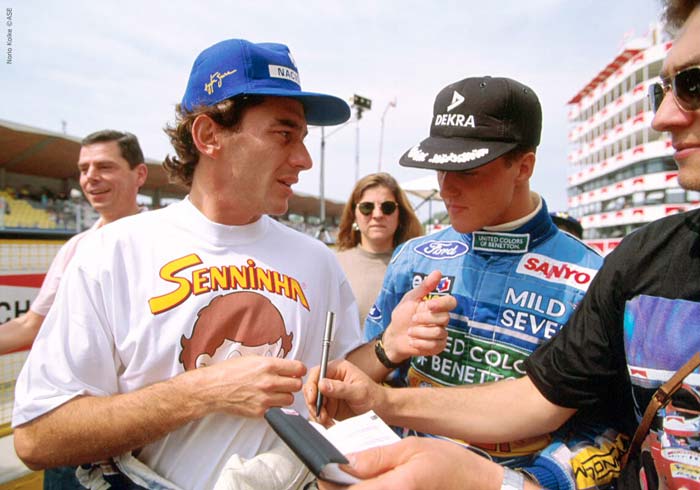 “We had some very tough fights, very good fights. We had some tough times at a personal level but we had some good times as well. I always keep a good memory,” said the six-times world champion.

“I have many memories. The first one is in 1980 in a go-kart race where I saw him racing and I was very impressed not knowing who he is and nobody knew who he was at the time,” Schumacher said.

“He was just purely a fantastic kart racer with a lot of ability and talent. Unfortunately, we talk about just one driver but I like to remember both drivers who died,” he added, recalling the death of Austrian Roland Ratzenberger the day before Senna’s crash.

Schumacher said last week that he considered turning his back on Formula One because of the events at Imola in 1994.

“What I experienced, what happened, left me speechless,” he wrote on his website.

“It was the first time I was confronted by death in my sport. For a while I doubted whether I wanted to carry on at all.”

“From my point of view, and I’ve said this many times, it was the first experience I’d had with death in the sport I most love,” he said.

“The only positive I can take out of this is that we have seen a lot of action in terms of safety since that day. (FIA President) Max Mosley was very much the person to drive this safety campaign very strongly forward.

“When you see what a safety level we have these days, it’s a tremendous success… at the end of the day we can see something positive out of it.”

Formula One has wondered since the death of Senna, three times the world champion, what might have been had he and Schumacher been able to continue their rivalry. However, Schumacher, the most successful driver in the sport’s history, has always shunned comparisons.