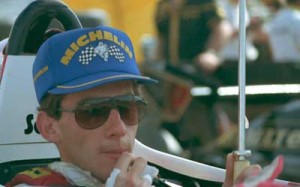 In the first five races of his debut season, Senna had not particularly grabbed everyone’s attention. But in a sodden Monte Carlo that all changed. Driving an uncompetitive Toleman, he clawed his way through the field from 13th on the grid, showing his prowess in the wet. He scythed past greats of the sport, closing on Alain Prost, only for the race to be stopped and to finish second.

A year on Senna had moved to Lotus. It was not the fastest car that year, but he still won seven pole positions. The Brazilian’s first win with the team came in his second race, and it was once again in the wet. He qualified on pole and beat the entire field apart from second place by an entire lap.

Senna had a particular association and affinity for Monaco. He won there on six occasions in his 10 years in the sport. The first of those wins came in 1987, in his final year with Lotus. Senna won by more than half a minute, but had to settle for third in the championship before his move to McLaren.

“Suddenly I realised that I was no longer driving the car consciously,” Senna said after his Monaco pole position in 1988. “I was driving it by a kind of instinct, only I was in a different dimension. It was like I was in a tunnel.” He outqualified his teammate, the great Alain Prost, by a frankly ridiculous 1.427 seconds.

Senna had defined himself against Prost, his teammate at McLaren, and overcame the Frenchman in their first season together, and the Japanese Grand Prix was where he won the title for the first time. At Suzuka he stalled at the start, and fell way down the field. Then, drops of rain came, and he brilliantly carved his way through the pack, overtaking Prost for the lead which is where he stayed. It was the first of his three world championships.

Qualifying at Jerez in 1990 was not in the easiest of circumstances. Martin Donnelly, driving for Team Lotus, had sustained an enormous and harrowing crash in Friday practice, which Senna was clearly moved by. That did not stop him putting his McLaren on pole ahead of the two Ferraris, breaking the lap record in the process.

Senna cared deeply about Brazil. He draped himself in the flag when he won and donated millions to underprivileged children back in his homeland. So it was a source of deep anguish that he had not won in Brazil. That changed in 1991 when, in one of his most heroic races, he miraculously brought his McLaren home despite being stuck in sixth gear.

The year 1992 was a significantly less prosperous for Senna. Nigel Mansell had won the first five races, thanks to his all-conquering Williams, and it seemed as if he would make it six in Monaco. However, an unexpected tyre change gave Senna the lead. On old rubber, he used all the defensive skills in his arsenal to keep the Briton behind in the closing laps and take another Monaco victory.

Whenever a poll is held to ask which was Senna’s greatest race, his victory at Donington in 1993 always comes out on top. It was a simply stunning drive. He lost ground at the start, falling to fifth, before overtaking everyone in front to hold the lead by the end of the lap. In a wet race he mastered the conditions and strategy better than anyone else. Only Damon Hill finished on the same lap.

His final race for McLaren, and his final race win in Formula One. Senna took the only pole position of the year won by someone not driving a Williams. The Brazilian won the race from his great rival Alain Prost in the Frenchman’s final race. It was the last time either of them would finish on the podium.