Today is a date that some Formula 1 fans have etched into their minds. May 1st is the anniversary of the death of Ayrton Senna at the San Marino Grand Prix, nearly quarter of a century ago. It’s an event that is still felt around the world to this day, on a global basis, thanks to the power of Senna’s personality and the achievements of his, by today’s standards, short career.

You will see a whole host of tributes, memorials and anecdotes of the great Brazilian online today, just like we did last year, and we will forever more. The question is; why is that? Why does Ayrton Senna matter so much in the modern world of F1 still? 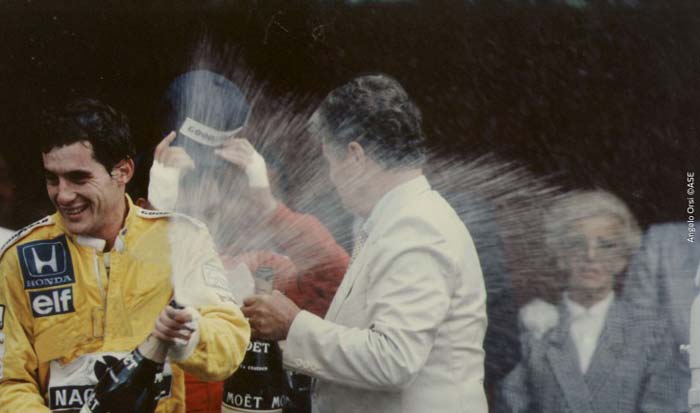 Call it romanticism, but the longer time moves on from that fateful day in Italy, the more Senna’s triumphs become part of the tapestry of F1. The number of people that saw Senna live and on track was small to start with and reduces with every passing year. These few are not of the generation of camera phones and social media, and the stories of Ayrton have turned into embellished fairytales. Couple this with the release of the acclaimed documentary in 2010 and the personality, passion and thrill of motorsport at it’s purest reaches a younger army of fans in a more distilled form.

Senna raced in a different era to the one we’re used to today. Drivers in the mid-1980s to mid-1990s still managed their tyres and watched their fuel consumption, but these now common traits weren’t broadcast over the airwaves and were hidden behind the pomp and bravado that the big personalities brought to the sport. Over time these brash characters were beaten down by PR and sponsor commitments, while the thirst for knowledge of everything to do with processes and procedures within the teams saw the radio waves become public domain. Danger was a bedfellow that couldn’t be ignored but could be neutered. Stewards stumbled over every decision, and the engines screamed for hours every weekend.

Of course, danger is still an element in modern F1 but is well controlled up to a point. Jules Bianchi’s accident was a stark reminder that it still lurks on the outside of “the show” and can rear it’s ugly head when even the slightest mistake in safety procedures occur. But with Bianchi, it was the first time in a generation of F1 fans that death and tragedy and the shock was raw and hard to digest.

It’s often forgotten the level of danger that F1 carried throughout its history. Senna’s passing was a huge shock as it was the first fatality in 12 years in the sport, but it also took one of it’s most charismatic and most successful of the era; it followed the already tragic events of the death of Roland Ratzenberger the day before, and instigated changes that are still felt today. The improvement of safety was paramount and thus began a crusade to not only the opportunity for accidents to occur through process and due diligence, but also making the cars as robust as possible. The example of Robert Kubica’s shunt in Canada 13 years later is the case study of just how far the technology had advanced in that time.

F1 had begun to see it’s popularity grow than had ever been seen before. Senna, alongside rivals Alain Prost and Nigel Mansell, had aided the surge of TV audiences starting in the late 1980s. The Senna-Prost feud spanned five years and encompassed three seasons of bickering, sniping and on track collisions to seal World Titles, with every word lapped up by the media, making headline news and surpassing the sports sections of newspapers and TV broadcasts. The sponsors kept on coming, and so did the income to teams, pushing F1 into newer and newer markets.

Today, with new regulations attempting to remould the package that F1 represents yet again, some of the key things that saw fans flock to watch the sport, be it in the stands on television, have been surgically removed. It’s no secret that decisions made to enhance the product of F1 have been made to keep shareholders and investors happy, and not the fans. The racing has become sterile and artificial – when it’s good it turns into a debate over the merits of DRS and Pirelli tyres. The cars aren’t as loud or as intimidating as we remember, and PR rules over drivers’ personalities with an iron grip.

Senna still represents an era where red tape didn’t constrict a driver from what they could do or say. His era was more tangible, more visceral – you felt the cars through their blood and thunder nature. Finishing a race was a triumph in itself, drivers drenched in sweat and pale in complexion due to their efforts. F1 was hard, tough and unfair because it is hard, tough and unfair in nature.

That era needed a poster boy and Senna fitted the bill – he was blisteringly quick and utterly ruthless on and off the track, but most importantly he was the man to beat; going wheel to wheel with the great man meant either coming out on top or being dealt with in a manner not seen before in F1. Not many achieved the former.

Making rules stable enough for drivers to challenge each other fairly, without the argument of who has the fastest car or most reliable engine has to be what the governing bodies need to work towards heading into 2020 and beyond. By all means, make them look aggressive, but make them as challenging as possible. Drivers need to be selected by teams on merit first, bank balances second.

The ideology of Senna is the foundation of which F1’s international success is built on, but it also serves to be a blueprint of what it can be in the future. Whether it can shake itself from the corporate shackles to reach it is another question entirely.