On May 5th 1994 many representatives of Formula One and the world motor racing community attended the funeral in São Paulo of one of the greatest drivers ever to have graced the sport, three-time World Champion Ayrton Senna.

Two important faces were not there, however; Bernie Ecclestone, president of FOM and friend of Senna, had been asked not to attend by the family, and Max Mosley, the then president of the FIA, who had chosen not to go. He chose instead to attend the funeral two days later in Salzburg of Senna’s fellow racing driver, Roland Ratzenberger, who was also killed that same weekend at Imola. When asked later about this, Mosley explained, ‘Roland had been forgotten. So I went to his funeral because everyone went to Senna’s. I thought it was important that somebody went to his.’ 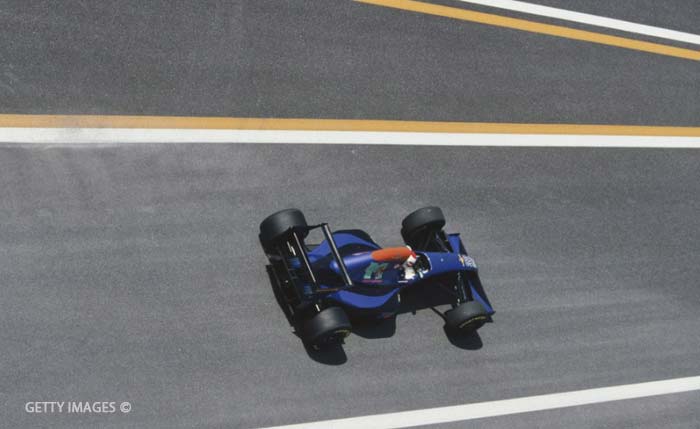 Ratzenberger was born in Salzburg, Austria on the 4th July 1960, just three and a half months after Senna, but it had taken him a lot longer to get his break into Formula One. He was a late starter in motorsport, only beginning his career in German Formula Ford in 1983 at the age of twenty-three. Conscious of his age and fearing that it would go against him with team bosses and sponsors, he often claimed to have been born in 1962, taking two years off his age.

Over the next two seasons, he built a reputation as a solid workmanlike driver in Formula Ford championships. He finished second in the German competition in 1985 and in the same year he took first place in both the Austrian and the Central European championships. After these successes, he decided to take the chance of entering the Formula Ford Festival at Brands Hatch that year. He finished on the podium, having taken second place and in 1986 he went one place better and won the event. This was enough to help him make the move up into British Formula 3.

He spent two seasons in F3, racing first for West Surrey Racing, then the following season for Madgwick Motorsport. Both years he finished twelfth, but at the same time, he also showed his versatility as a racing driver by taking part in the inaugural season of the World Touring Car Championship in 1987, driving a BMW M3 for the Schnitzer race team. He managed two-second place finished for the team that year, but unfortunately for Ratzenberger’s career, the WTCC did not continue the following season and did not restart until 2005.

More importantly, 1989 was the first year in which he took part in the 24 Hours of Le Mans, driving a Porsche 962 with Maurizio Sandro Sala and Walter Lechner for Brun Motorsport. They had to retire in the third hour of that race, but Ratzenberger continued to take part at Le Mans for the rest of his short life, racing again for Brun in 1991 and for the Japanese SARD team in 1990, 1992 and 1993 when he gained his best finish in the race, finishing in fifth place driving a Toyota 93 C-V with Mauro Martini and Naoki Nagasaka.

In the early nineties, Ratzenberger moved his career to Japan. He competed in the Japanese Sports Prototype Championship for SARD, winning two races between 1990 and 1991. At the same time, he was also taking part in the Japanese Touring Car Championship where he finished seventh in both seasons.

In 1992 he returned to racing in single seaters, taking part in Japanese Formula 3000, later to become Formula Nippon.  In one race at the Fuji circuit, he came to the assistance of fellow driver Anthony Reid, who had crashed with such an impact that his crash helmet had been ripped off of his head.  After observing the response of the stewards to this incident, Ratzenberger collaborated with a local journalist to write an article condemning the safety standards at the circuit.

He finished his first season in Japanese F3000 in seventh place, one above his former SARD team-mate, Eddie Irvine.  The following year Ratzenberger finished in eleventh place while Irvine went on to finish the season as runner-up and began his Formula One career driving for Jordan in the last two races of the 1993 season.

The following year Ratzenberger also made the move to Formula One, joining the new Simtek race team alongside David Brabham, the son of Australian triple world champion Jack Brabham.  His debut at Interlagos in Brazil was disappointing as he failed to qualify, having been delayed by mechanical problems during practice and then a rain storm during qualifying prevented him from setting a representative time.  In the following race, he was more fortunate as it was the Pacific Grand Prix, held at the Aida circuit in Japan, where his experience racing in that country meant he was the only driver to have raced that circuit before.  He qualified in twenty-sixth place, but finished the race in eleventh, albeit five laps behind the winner, Michael Schumacher driving for Benetton in what would prove to be the first of his world championship winning years.  That race, however, turned out to be the only Formula One race that Ratzenberger would actually take part in.

The next race was the San Marino Grand Prix, although the race actually took place at the Imola circuit across the border from the small republic of San Marino, in neighbouring Italy.  Things did not go well from the start – in Friday qualifying Rubens Barrichello, driving for Jordan, hit a kerb and was launched into the air, hitting the top of a tyre barrier and rolling several times before coming to rest upside down.  Barrichello was knocked unconscious and after treatment, in nearby Bologna, he was unable to take part in the rest of the race weekend.

In the Saturday qualifying, things turned much, much worse.  In the last twenty minutes of final qualifying, Ratzenberger ran over a kerb at the Acque Minerali chicane which is believed to have damaged his front wing.  Rather than return to the pits, he carried on into another fast lap. Travelling at nearly 200 mph approaching the flat out Villeneuve Curva it is thought that he suffered a front wing failure and as a result could not negotiate the curve and crashed almost head-on into the concrete barrier wall opposite.  He suffered a basal skull fracture in the massive impact and was airlifted to the Maggiore Hospital in Bologna, the same one that had treated Barrichello the previous day.  Sadly there was nothing that could be done to save him and Roland Ratzenberger died of his injuries the same day.  This was Formula One’s first race weekend fatality since Riccardo Paletti at the Canadian Grand Prix in 1982 and the first driver fatality since Elio de Angelis in a testing accident in 1986.  Unfortunately, it was only to be one day until the next one.

Ratzenberger never had the chance to show what he would have been capable of as an F1 driver.  Before his crash, he had set a time which would have allowed him to qualify to take part in the race and he may have done enough in his first few races to gain the seat at Simtek on a more permanent basis. The indication from his previous career is that although he is unlikely to have challenged for a world championship he would have been a reliable, if an unspectacular driver, however, we will never know. What is certain is that after the events of that tragic weekend at Imola, steps were taken to improve the safety of F1.

As the quote from Max Mosley at the start of the article made clear, in the immediate aftermath of the double tragedy, the death of Roland Ratzenberger was all too often overlooked, although not by his teammates as Simtek ran the rest of the season with ‘For Roland’ painted on the cars’ airboxes.  His former team mate Eddie Irvine took his place driving for SARD at Le Mans that year, with Ratzenberger’s name still on the side of the car and he helped bring it home in second place.

Now, over twenty years later, as we remember the events of that weekend at Imola, we must make sure we recall both of the drivers who lost their lives there.  Roland and Ayrton, born just months apart and who followed two very different career paths, but whose lives ended just hours apart on the same circuit, we remember you both.