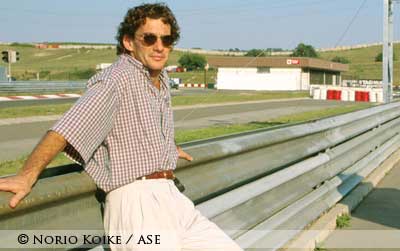 It was Monday 24th May 1993, the day after Ayrton’s record breaking 6th win at the most glamorous of all races!

And it had been a particularly difficult win in Monaco as, on Thursday free practice, he had crashed and hurt his left thumb really badly – and he was left handed)

After nearly 48 hours under the thoroughful care of his personal physiotherapist Joseph Leberer – with a cocktail cream, ice and massages.- Ayrton was ready to go. (this was an extraordinary race and I will write more about it sometime)

Back to Monday. We are in London. Ayrton called me in the afternoon; we had arranged to talk more so I could write my columns to Japan and Brazil.

Ayrton: “Hi Betise, all ok? I need a favour”

Betise : “Oh, really!  I thought we were going to talk more about the race”, I replied laughing

Ayrton: “Well, that as well.  Perhaps we could talk at a McDonalds”?

Betise: “What?!?! You’re kidding, right? You want to go to McDonalds and drag me there, too? Even for my boss it is a lot to ask”, still laughing but not as much!

Ayrton: “No, it’s not for me! Adriane wants to have a Big Mac, can you believe it?”

Betise: “Of course I can. What I can’t believe is that you are prepared to go there. I shall bring my camera and make you autograph the photo for posterity”, by then I am in tears of laughter.

Senna: “Ok, very funny. Where is the nearest McDonalds? I am at the Berkeley. We can meet there and talk about the Monaco weekend while Adriane has her burger”

Half an hour later, we met at McDonalds on the Kings Rd, walked up the stairs and started queueing. It was around 3pm then so it was not very busy but I could see Ayrton had on that face of “oh, no, people are beginning to recognise me , they will mob me and my excellent mood will turn to shit”. I was prepared for the worse. But … nobody recognised him. “Oh No, that could be the worst!”, I thought, laughing to myself.

“Don’t I recognise him from somewhere?”, he said to me but pointing at Ayrton.

I can still hear my own laughter!!!! I simply couldn’t hold it. Not even Ayrton’s not so pleased face (that’s the understatement of my life) could stop me. It didn’t last long, though.  The overwhelming feeling of victory in Monte Carlo and Adriane’s happy company thankfully prevailed. And he joined me in giggling as I still hadn’t managed to stop!!

He did see the funny side of it eventually. “Bloody hell… I won it yesterday, for the 6th time. In Monaco!!”. We all giggled even louder!!

I still live near that McDonalds and walk past there practically daily.  Pity I did not take my camera. Well, I was brave.- still am.  But not THAT brave.