“2.2 seconds is Senna’s lead as he crossed the line. And you can see how charged up the triple world champion is. On the wet he was hurling it through the chicane and the top of the circuit up the start-finish line and he is going through those wet patches as if they don’t exist. There is no need for Damon to try and match that.”

Nothing, absolutely nothing could have recreated the mood at Interlagos that March, especially since Ayrton Senna, now three times world champion was at 3rd spot on the grid. His bitter rival Alain Prost was back and at poll, driving the Williams along with his teammate Damon Hill at 2nd place. But all bets were on Prost taking the win and that Hill and Schumacher would probably be giving him company on the podium. After all, Senna was driving an inferior machine with a massively underpowered engine. 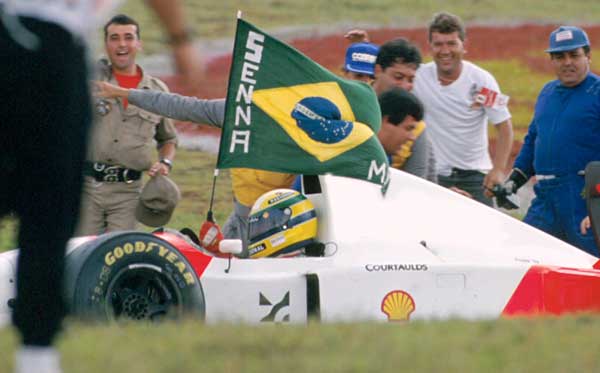 The race started off with a shocking crash right at the onset, as Senna’s new teammate Michael Andretti and Gerhard Berger came together.

Both thankfully walked away from the crash. Meanwhile up ahead, Senna had managed to weasel his way past Hill and was busy chasing Prost who was pulling away into the distance. Behind Senna, Hill was looking at holding off eager beaver Schumacher looking to charge in his Benetton. Even though Ayrton was giving it his all, his machine wasn’t really supporting him. The struggle to retain the second spot came to an end when Hill finally managed to pass Senna on lap 11. Bad luck seemed to haunt the Brazilian who was soon asked to make a mandatory 10-second stop. It seemed like Ayrton’s race was over as he pulled out of the pitlane and ended up behind Schumacher at 4th place.

And then it rained.

Ayrton quickly pitted to change to wet tyres – a strategy that served him incredibly well. As he pulled out, the heavens opened up. Prost delayed his pitstop and ended up aquaplaning right into a stalled Christian Fittipaldi. Meanwhile, Ukyo Katayama and Aguri Suzuki both crashed on the start-finish lane. The Footwork Suzuki was left stranded on the circuit, and for the first time, a safety car was deployed to clear the track.

The circuit looked like a graveyard of abandoned Formula 1 cars, even as the remaining 15 cars slotted in behind the safety car. The race restarted after the track was cleared and as expected Hill made a quick getaway – the only chance it seemed he would have to escape a determined Senna who was now in 2nd spot.

Then on lap 45, Senna swooped in and took Hill’s lead. Everyone waited. They waited for Hill to make his move and take first place. After all, he was in a far superior car. But it never happened.

The chequered flag came out and Senna crossed the finish line taking an unbelievable win. One that was never expected. Hill and Schumacher took 2nd and 3rd place in a truly memorable race.

1992 had been an absolute disaster. 7 retirements, 4 podium finishes, and only 3 wins. Ayrton Senna had gone from the high of 1991 and a championship win, to an absolute low and desperation. The story was that Ayrton was ready to do almost anything for a seat in Williams – but arch-nemesis Alain Prost had beaten him to it. So much so that Prost had managed to wangle a no-Senna clause from Sir Frank Williams! So, over Christmas, Senna even tested a Penske-Chevrolet Indycar. Trouble at home continued, as Honda withdrew support and Ron Dennis was unable to get Renault V10s. In the end, the McLaren car that started the season had “customer” Ford HB V8 engine, far, far, more under developed than the engines supplied to Benetton. Ayrton finally decided to come on board with McLaren, initially only on a race-by-race basis. And so it was that the McLaren team landed up in Brazil knowning that Ayrton’s future with them was fairly uncertain. They left with a win in their pocket. An unlikely one yes, but it was a hard-fought, well-earned one. Excited Brazilians jumped fences and poured on to circuit to congratulate Ayrton, hand him a flag, dance and cheer.

It was a special moment. McLaren was celebrating its 100th Grand Prix win.

But this would also be the last time a Brazilian would win a home race for a long time. Felipe Massa would break this drought only in 2006.

“Today I didn’t have a car fast enough to keep up with Williamses, but my car was running trouble-free all the way, so its; a great result and to see the crowd there it’s – something that you have to experience.”

Ayrton Senna on winning the race