Alain Prost became the first driver to successfully defend his World Championship since Jack Brabham in 1960 following a season that climaxed in a classic three-way title fight at the final round in Adelaide. Prost appeared to have little chance against the powerful Williams-Hondas of Nigel Mansell and the pre-season favourite Nelson Piquet. But with just eighteen laps remaining and the title in his grasp, Mansell suffered a spectacular 180 mph puncture that ended his hopes. Piquet was then forced to change tyres as a precaution, handing the race and title to a surprised but ecstatic Prost. 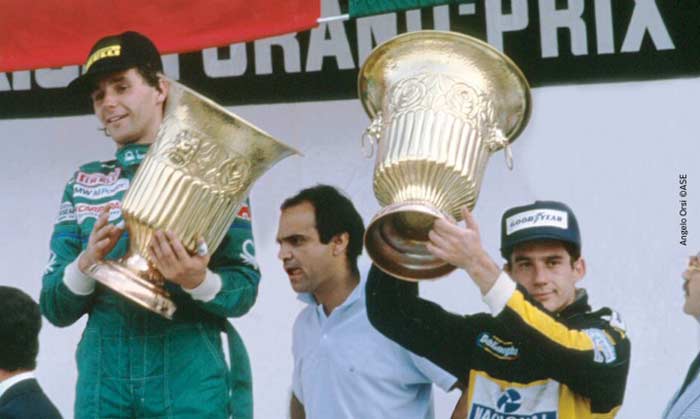 Williams’ year had begun badly when team founder Frank Williams was paralysed in a road accident. But Mansell was a revelation once the season started. He drove with newly found maturity and speed, winning four times and overshadowing his more illustrious new team-mate.

However, as the Williams team-mates fought a tense battle for supremacy, Prost also won four races and finished in the points on all but three occasions. Although his McLaren was at times no match for the Williams (he was a lapped third at Brands Hatch), Prost’s consistency won out over the full season.

Ayrton Senna was the fourth major title protagonist. He beat Mansell by half a car-length in a dash to the finish line at Spain’s new venue at Jerez. Another victory on the streets of Detroit kept him in the championship hunt until the end of the European season. Senna qualified on pole position and led half of the season’s events, but ultimately his Lotus-Renault could not match his pace.

Gerhard Berger scored a first victory in Mexico after several impressive performances in the powerful Benetton-BMW. While the Goodyear-equipped cars all made tyre stops, Berger ran without pitting to give Pirelli a rare success. Teo Fabi qualified on pole twice for Benetton, but never led a lap.

This was also the year of the low-line Brabham BT55. In order to reduce frontal area and lower the centre of gravity, the car’s BMW engine lay almost flat in the chassis and was mated to a new compact, seven-speed Weismann gearbox. However, the car suffered gearbox and overheating problems and failed to impress. Tragedy also touched the team when Elio de Angelis was killed in May while testing a BT55 at Circuit Paul Ricard.

Jacques Lafitte also suffered career-ending injuries at the start of the British GP – the very race in which he equalled Graham Hill’s long-standing record for Grand Prix starts. Keke Rosberg also retired from Formula 1 after a disappointing year at McLaren.

Finally, F1 held a race in communist Europe for the first time at the new Hungaroring outside Budapest, where a huge crowd witnessed a great race between Senna and Piquet.