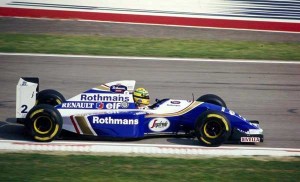 Three-time Formula 1 world champion Ayrton Senna was leading the San Marino Grand Prix on May 1 1994 when he crashed into barrier at the Imola circuit, resulting in his death at the age of 34.

The Brazilian’s death rounded off a dark weekend for the sport, with Austrian Roland Ratzenberger killed one day earlier in qualifying, while Rubens Barrichello escaped a 140mph crash relatively unhurt during Friday’s practice, which ruled him out of Sunday’s race.

Senna was competing for the Williams team for the first time during the 1994 season alongside British driver Damon Hill, having left McLaren after six years in a bid to win a fourth drivers title. The team had won the championship the previous two seasons with Alain Prost and Nigel Mansell, but changes to the sport’s regulations, as well as Senna’s unfamiliarity with the Renault engine meant that he failed to finish the first two races of the season.

Senna was urged not to race in Imola by Professor Sid Watkins, the renowned neurosurgeon who had been involved in F1’s medical department since 1978, after the doctor saw how the Brazilian had been affected by Ratzenberger’s death on the Saturday. Senna did sit out the remaining of qualifying and the post-qualifying press conference, but was back in the car for the race the following day.

A crash at the start of the race meant that the field spent a number of early laps behind the safety car, but Senna got the action back underway on lap six, one lap prior to the fatal crash.

On the seventh lap, his Williams ran off the racing line going into the Tamburello corner, smashing into a concrete barrier at 190mph, resulting in a fractured skull, head trauma and debris penetrating the visor on his helmet, any of which would have been enough to kill him.

Over three hours after the crash, a doctor at the emergency department in Bologna where Senna has been taken for treatment confirmed that the 34-year-old had died as a result of the injuries sustained in the collision. When Senna had been removed from his car and into an ambulance, medics found an Austrian flag, which he had been intending to unfurl in memory of Ratzenberger at the end of the race.

The crash resulted in years of legal complications for Williams as the Italian courts sought to determine what had caused the crash, and who was to blame for Senna’s death. Team principal Frank Williams was one of six people charged in the aftermath of the crash, with concerns raised over a steering column that designerAdrian Newey had lengthened shortly before the race to suit Senna, but a 1997 trial acquitted those charged.

In 2007, the Supreme Court of Italy blamed the steering column in the FW16 for the collision, citing technical director Patrick Head as the responsible party for allowing the modifications to the steering, but with the verdict coming 13 years after Senna’s death, he was not arrested as it was outside that statute of limitation for manslaughter under Italian law.

Newey, who went on to design four double championship winning cars with Red Bull and Sebastian Vettel, has since said that he believes the exact cause of the crash with never be known, as the steering could have been damaged during the crash, highlighting the unusual way the car left the track as not consistent with a broken steering column.

Following the deaths of Senna and Ratzenberger at the San Marino Grand Prix, the sport sought to make a number of safety changes to prevent similar crashes in the future, including changes to the designs of the cars, the reformation of the Grand Prix Drivers Association to give drivers a voice and changes to safety barriers.

Since Senna’s death, no F1 driver has died while racing in the sport, although Marussia test driver Maria de Villota died in 2013 as the result of injuries sustained during a test the year before, while three marshals have been killed. Imola continued to host F1 until 2006, when it was dropped from the race calendar for the following season, although it has since undergone a reconstruction, opening the possibility that F1 could hold tests there in the future.