It would probably be a very slight exaggeration to suggest that Ayrton Senna has brought a fresh standard of driving excellence to Formula One simply on the strength of his splendid flag-to-flag victory in the Portuguese Grand Prix at Estoril, but it wouldn’t be too much of an exaggeration. It was a masterly performance for two or three reasons. Obviously, the fact that Senna started from pole position after establishing the fastest qualifying times in the two official sessions was one of them, but the way he handled himself in the race and assessed his own performance afterwards indicated that here was a quite unusually objective racing driver with the capacity for intelligent self-appraisal. 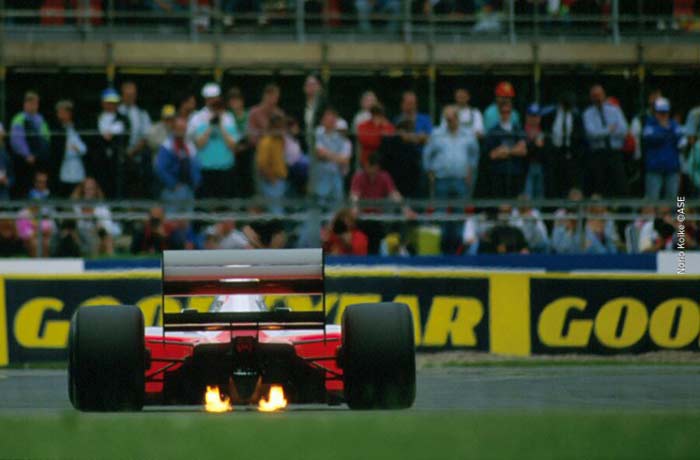 Senna’s 1 min 21.007 sec fastest lap round the Estoril autodrome saw him beat Alain Prost’s McLaren MP4/2B by almost 0.4 sec, and, with rain falling steadily, the Brazilian made it a case of “no contest” once the race got underway. He may have had a troubled practice, the Lotus mechanics taking some time to pinpoint the cause of the misfire which had troubled his car in Brazil, while his spare car had clutch trouble and stranded him out on the circuit during one untimed session, but the race was no problem whatsoever. Quickly mastering the technique of running in the highest possible gear at all times, thereby minimising wheel spin on the treacherous track surface, Senna drove away into the distance and lapped everybody bar second place-man Michele Alboreto’s Ferrari 156/85.

Bravely, and in determined style, Senna’s team-mate Elio de Angelis came sprinting through from his position outside Keke Rosberg’s Williams FW10 on the second row, and the Italian did his level best to keep up for the first few laps. Some people thought he was “protecting” Senna from any non-Lotus challenge, but the fact of the matter was Senna required no such assistance. Within 15 laps he was out of sight and de Angelis’s concentration was focussed on fending off Prost’s McLaren which shadowed him relentlessly from the start.

Time after time Prost seemed close enough to get by, occasionally edging the McLaren’s nose alongside the Lotus, but Elio was driving with tremendous composure and refused to be ruffled into a mistake. As the race progressed, so the rain intensified to the point where huge lakes were forming on the start, finish straight and the drivers hardly dared take their eyes off the road to read their pit signals, such was the degree of concentration required. At one point Senna actually slid off the circuit, getting all four wheels on the grass, as he went down the hill behind the paddock, and later dismissed idolatrous reports that it was a brilliant piece of car control with an honest, “it was just luck that it came back on the road!” Funny how top drivers seem to make their own luck. . . .

Eventually it was the normally cool Prost whose McLaren pirouetted off on the standing water in front of the pits. Bobbing along in de Angelis’s wake, the red and white car suddenly snapped into a series of spins, glanced the guard rail opposite the pit wall and shuddered to a halt with a stalled engine. That little drama handed Michele Alboreto third place on a plate and he took up the attack on de Angelis, finally slipping through ahead of the Lotus on lap 43, although at this stage the Ferrari found itself a minute behind Senna with no realistic chance of catching up. All Michele could do was to prevent himself being lapped, a task successfully achieved by the time the sodden chequered flag came out after 67 laps and two hours’ racing.

Immediately after Alboreto slipped past him, de Angelis slid wide on an uphill right-hander, an excursion which probably contributed to the slow puncture he sustained in one of his front Goodyears shortly before the finish. He thus had to ease his pace slightly in order to stay in control and was unable to fend off Patrick Tambay’s Renault RE60 which came storming confidently through to take third place ahead of him at the end. The top half dozen was completed by Nigel Mansell’s Williams FW10 and the Cosworth DFY-engined Tyrrell 012 of Stefan Bellof. Mansell’s performance was quite noteworthy after a troubled practice during which he crashed heavily after being knocked off the circuit by the warring Alfa Romeo “team-mates” Riccardo Patrese and Eddie Cheever. Then, on the warm-up lap, Mansell spun again and damaged his Williams’ nose section, so he pulled in for repairs and was obliged to start from the pit lane once the field had departed. He drove with just the right blend of restraint and determination to complete the race a few lengths ahead of Bellof, the German’s Tyrrell sporting a frayed nose section damaged in an earlier collision with Manfred Winkelhock’s RAM.

The other Williams of Keke Rosberg stalled at the start and was clipped by Jonathan Palmer’s debutant Zakspeed 841 as the German car accelerated away from the grid. Palmer sustained suspension damage which resulted in his early retirement, while the Williams’ legacy was a damaged tyre which was later replaced when the Finn made a quick pit stop. However, the somewhat sudden power delivery which characterises the Honda V6 engine eventually caught Rosberg out and he spun into the barrier on the right-hander before the pits, slightly injuring his hand in the process. “It’s either got nothing — or 7,000 bhp!” quipped Rosberg on the subject of the Japanese engine.

Since the Brazilian Grand Prix, Rene Arnoux had abruptly left the Ferrari team, although whether he was fired or resigned will be a matter of some debate for many months to come. His consistently disappointing form over the past season, allied to problems recovering from a leg muscle operation over the winter, were touted as the reasons behind his departure. His place was taken by the popular Swede Stefan Johansson whom Alex Hawkridge of Toleman released from any further commitment to the English team. Ferrari’s new boy qualified a cautious 11th and had his race prospects compromised when he was rammed early on by the impetuous Patrese, spinning both Ferrari and Alfa Romeo off the circuit. Johansson was the only one to continue and he finally finished eighth immediately behind Derek Warwick’s Renault RE60 despite a pit stop to change tyres and also free a sticking front brake. Warwick had briefly poked into the top six in the early stages, but made a precautionary pit stop after spinning lightly into a guard rail, and was disappointed that he could only finish seventh. Pirelli’s wet weather rubber was totally ineffectual and Nelson Piquet was reduced to the status of pathetic also-ran in the appalling conditions, skittering round at walking pace in his Brabham BT54-BMW — a derivative of the car that monopolised pole position in 1984. Nelson made so many stops during the race that he actually changed into some dry overalls on one occasion, before finally calling a day to the whole disappointing affair.

Similarly handicapped by their Pirellis, the Ligier team first had Jacques Laffite pull out of the race on his own initiative, and then de Cesaris was called in on the Frenchman’s recommendation, so Winkelhock’s RAM was the only Pirelli runner left at the end, creeping round gently at the back. Niki Lauda’s retirement with engine failure made this an event of minor, short-term historic significance. For with Prost out as well, it was the first time a McLaren had not finished a Grand Prix since Dallas last summer, more importantly, it was the first time a McLaren had failed to win a Grand Prix since the event in that sunscorched Texas city.

It was difficult to imagine a more worthy performance than Ayrton Senna to dislodge McLaren International from its impressively dominant pedestal.