It was the Brazilian Grand Prix last weekend and inevitably the chatter has been laced with the legend of Senna. Indeed all year, 21 exactly since his death, Ayrton Senna’s name has never been far from F1. First Sebastian Vettel and then Lewis Hamilton beat Senna’s 41 GP wins and then Hamilton – for whom Senna was a hero and a role model – matched the Brazilian’s three World Titles. Senna’s image – intense, dark, complex – has also been back in TAG Heuer’s advertising along with the Don’t Crack Under Pressure line first used in the campaign a quarter of a century ago. 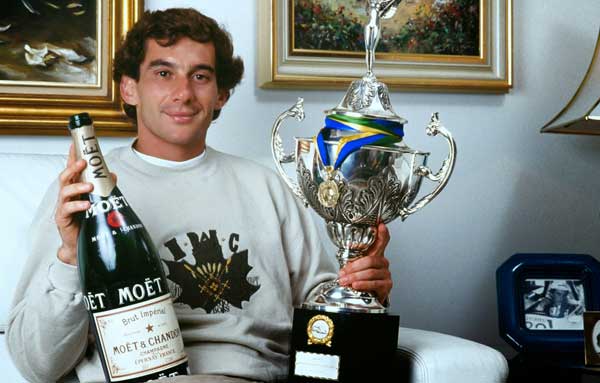 Earlier this year, Telegraph Luxury caught up with Senna’s nephew Bruno. You’ll know Bruno from his time in F1, from his engaging and insightful commentary for Sky or maybe from Formula E where he’s just started his second season. We started out talking about 1988, when Ayrton won his first championship and ended up in 1994 when Senna died and the family abruptly stopped Bruno racing.  At the time Ayrton had said; “If you think I’m fast, wait until you see my nephew…”

“When Ayrton won his first championship I was five, so it was too difficult for me to understood. I knew  it mattered, but as a child you don’t have the whole picture. I was always watching. I knew the effect that he had on my family, and how much he brought everybody together.

“Ayrton was a natural leader. He had strong beliefs and good values. He was a guy with a charisma that brought everybody together. So it was a special occasion whenever he was around, it was not only because of what he’d achieved. It was because everybody enjoyed being with him at home.

“He was lots of fun and always slightly crazy fun. He enjoyed it. He wasn’t a person that was extremely zealous about being super-safe about everything, but he was the person that reacted to stuff. He got hit on the head by someone else’s jet ski, after that, everybody had to wear helmets. I was a little kid wearing this wetsuit and massive helmet. I’m sure that’s the image that everybody has of me now”. Bruno can be seen on jet ski with his uncle in the award-winning movie, Senna.

“My grandfather Milton first put Ayrton in a go-kart, and did the same with me. I was driving little cage buggies when I was four. At five, he got me my first go-kart, so that’s how it all kick-started.

“Ayrton was one of those people that liked to teach with experience. I would drive, figure some stuff out and do something wrong, and he would just tell me, ‘Look, just try this and see what you think.’ Then, I would try it, develop on it and suddenly, he was giving me pointers rather than coaching. It is really good because it makes you independent.”

Bruno’s racing career would be put on hold soon after May 1st 1994 when Senna crashed his Williams at the Imola circuit near Bologna. There are many that believe had it not been for the 10-year hiatus he may well have followed in his uncle’s footsteps.

“I was watching the race with my family. I realised it was serious when everybody was running around and things were going off. My mother was like, ‘I’m going to go to Italy.’ At that time, obviously, it was not as simple as today. There was a real commotion going on. I understood it was serious.”

Of the effect, he says; “I think it was a bit easier for me to cope because the shock just puts everything in perspective. As a child, you don’t understand exactly how things go. The aftermath was quite tough. So many people grieved that everywhere you went, it was like being at home where the family was grieving. It was like there was no escape from it. You don’t believe that your hero can die. You think that these people are immortal, like when you see Superman, right?”

Bruno was also forthcoming about how he feels Ayrton’s death affected his career; “I think a lot of the problems that I’ve had with my career would never have happened had he lived because he would have been like, ‘That’s going to happen. Do it this way.’

“After he finished driving, I don’t think he would have stayed in Formula 1. Ayrton was the kind of person that was either 100 per cent into it or not into it at all. I think he would have just lifted off, gone to work with the Foundation (The Senna Foundation which helps Brazilian children in education and has so far benefited 15 million children and teenagers) and done something that meant something for not only himself but for everybody.”