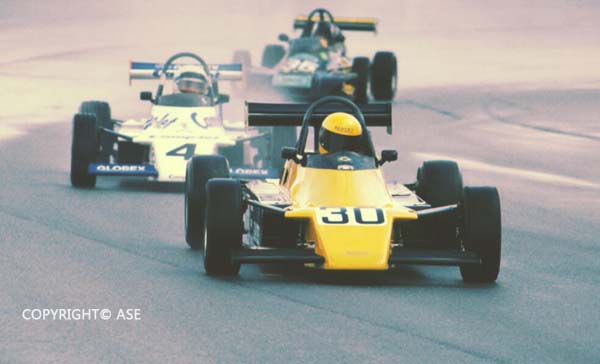 By then, Briton Rick Morris had already become a staple of the European Formula Ford scene. What started as a one-off race with Motor Racing Stables had led to Morris buying a £400 Formula Ford in the early 1970s, before he was drafted into the Hawke factory team in 1975.

After a brief stint with PRS, Morris was lured over to Royale for the 1980 season to work alongside young gun engineer Pat Symonds – now of Williams fame. Morris was then promoted to full factory status for 1981 – where his primary target was to take it to Van Diemen and their new Brazilian karting guru Ayrton Senna.

“We had a lot of wheel-banging. He was an absolute arsehole during that year. Completely self-centred. ‘You blocked me Rick’… ‘I didn’t mean to Ayrton’.

A lesson in determination

According to Morris, racing against Senna was a relentless endeavour. Between the Brazilian’s natural talent, and his commitment to his craft, Senna didn’t let up. And Morris had to learn to play along if he wanted to compete.

“Van Diemen had this thing where they could always use the Snetterton circuit at half past five when everyone else had pissed off home, and they had it for half an hour or 45 minutes. So they were going around and around,” explains Morris.

“But that taught me a lot. There was the old Russell Corner; it was a flat-out chicane with kerbs either side. I figured that if the car wasn’t too stiffly sprung, you could go through there flat. It hurt your arse, because the car was bouncing over the kerbs, but it meant I could stay with the Van Diemens.”

“They always left me behind on the hairpin before the bridge, particularly Ayrton with his karting experience. He was great off that corner, but I couldn’t do it, I just didn’t have the traction in the Royale. But I’d get him through Coram, and I’d get him through Russell, then I could stay in the tow onto the straight.

Once they weren’t racing against each other, however, Morris and Senna’s relationship changed.

“We did eventually become friends, but only after the 1981 season had finished and Ayrton had moved on to FF2000.

“The friendship came through Mauricio Gugelmin. He and I, we were great mates. He was very talented too, but a completely different temperament to Ayrton. Even though we were bashing the hell out of each other, Mauricio and I were mates. He wasn’t the sort of guy that would come over and say ‘you f###ing c###’, he was a nice guy.

“He was living with Ayrton, they had a house near Virginia Water in the UK. So I spent a lot of time with Ayrton during 1982; he was doing FF2000, and if the races didn’t clash he would come to our 1600 races with Gugelmin.

“Anyway, I have photos of my son Stevie, who was born in 1981, sitting on Ayrton’s shoulders in the paddock in ’82. Ayrton has a big smile on his face, he liked kids. His wife actually came over with him in ’81, Liliane, but she didn’t like the cold. They divorced soon after. She was a lovely girl, but she was very quiet. And Ayrton wasn’t thinking about his wife, all he thought about was racing. He was very self-centred…”

Was it obvious, even at that stage, just how good he would go on to be?

“Yeah, but you had plenty of these kids coming in,” says Morris. “He was obviously the best of the ones there at the time, but I didn’t realise he was going to become the legend that he was.”

The best part of four decades after beginning his career, Morris is still racing. He regularly commutes from the UK to South Africa where he races contemporary Formula Ford, and he recently travelled to Australia to race as part of a 50-car historic FF grid at the Phillip Island Classic. But he also acknowledges that the motor racing world has changed. The late 1970s/early 1980s were heady days for junior open-wheeler racing. Categories like Formula Ford didn’t have a control chassis, which meant manufacturers actually had genuine factory teams and employed young drivers.

It was an arms race, but it meant genuine opportunities for young talent to develop without always having to bring a huge budget.