The Imola circuit, or the Autodromo Internazionale Enzo e Dino Ferrari which is its official name, is one of the best known racing circuits in the world, even though it doesn’t assume the position of one of the top venues. 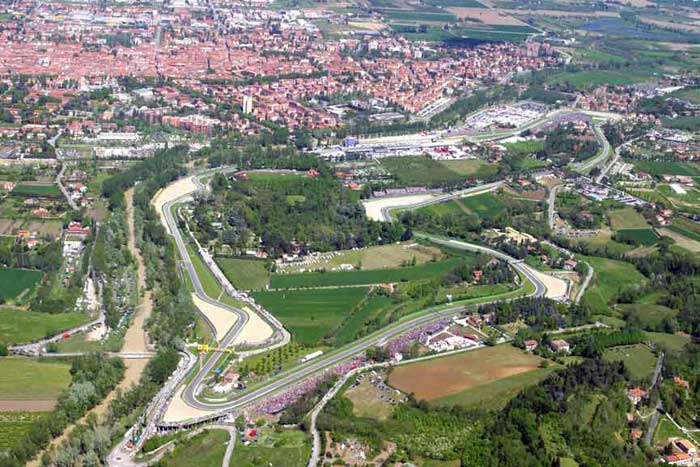 Located at the outskirt of the town of Imola, some 40 km from the city of Bologna in the Emilia-Romagna region, this venue is named after Enzo and Dino Ferrari. The famous Ferrari factory is located some 80 km from the circuit, in the town of Maranello. The current layout is 4.909 km long and has 17 turns while the motorcycle circuit is 27 meters longer. Some parts of the track, like Tamburello, Acqua Minerale, Alta or Rivazza, have a legendary status among the drivers and the fans. The stands capacity is around 60.000 which is a relatively small number compared to the newer tracks.

Imola circuit has a long and not so glorious history, after many crashes out of which some were fatal. Interestingly, the area of the circuit has long connections with racing. In the Roman time, there was an amphitheater for the gladiatorial chariot races. The idea of building a modern venue for motorsport was promoted in the 1940s by a group of local enthusiasts. Foundation stone was laid in March 1950, and two and a half years later, the first testing at the new circuit was made by Ferrari and motorbikes manufacturers – Moto Guzzi and Gilera. Since the first day, this circuit waws one of the few counter-clockwise ran tracks. Originally, the circuit was named Santino after the river which goes by the paddock side. In 1970, the venue was renamed to Autodromo Dino Ferrari, after Enzo’s son who had died in 1956, while in 1988, Enzo’s name was added after his death. The circuit is also known as Autodromo Imola.

The first car race was held in 1954, while the first Formula 1 Grand Prix was held in 1963. It was a non-championship race won by Lotus’ driver Jim Clark. After that race, some improvements were made to the facilities. Grandstand with a roof was built at the start/finish lane, parts of the track were widened and resurfaced. Over the years, many safety measures were implemented, but the layout never was significantly changed. Finally, in the mid-1970s, the decision was made to make this circuit a permanent racing track. Splice of the public roads and racing sections was merged into a properly surfaced course. The barriers were put all around the track, more stands were built as well the new pit building. In 1979, Imola circuit hosted another Formula 1 Grand Prix, but again it was a non-championship race, won by Brabham driver Niki Lauda. In the following year, Italian Grand Prix was held at Imola for the first time and Nelson Piquet was the winner.

Since 1981, this circuit hosted Formula 1 San Marino Grand Prix. The race was named after the nearby state of San Marino because the Italian Grand Prix was held at Monza circuit. The winner in 1981 again was Nelson Piquet. The last San Marino Grand Prix was held in 2006 and the event was since dropped from the F1 calendar. Michael Schumacher is the most successful Formula 1 driver at Imola as he scored seven wins while Alain Prost and Ayrton Senna won the race three times. Sadly, one of the reasons that Imola is so famous is probably the darkest weekend in the history of Formula 1. Two fatal crashes had happened at 1994 San Marino Grand Prix when Roland Ratzenberger and Ayrton Senna lost their lives. The Austrian was killed in the accident when he smashed into the wall driving approximately 300 km/h.

A day later, during the race, the legendary Brazilian driver was killed when his car went straight through Tamburello and hit the wall almost at the same place as Ratzenberger. Their deaths caused many safety improvements of the track and after that, there wasn’t any accident with a fatal outcome during F1 races. Even before that black weekend, some huge crashes were seen at Imola, the circuit which always was a subject of safety concerns. Tamburello corner always was problematic, and Nelson Piquet had a heavy crash there in 1987, while in 1989, Gerhard Berger’s car went on fire, and thankfully to the quick reaction by the track stewards he was saved, but with some burns on his hands.

Formula 1 had left Imola in 2006, mainly because of the outdated and unsuitable pit and paddock facilities. The venue was modernized and developed since 2007. Pit lane was widened and resurfaced while the garages were rebuilt to meet higher standards of the FIA. Since 2011, the track has the FIA grade 1 licence but the San Marino Grand Prix never was reinstalled to the calendar. A glimmer of hope appeared in 2015 after it was announced that Monza circuit can lose the race after 2016 when the contract with F1 expires.