In 1974 he won the São Paulo junior championship and in 1975 was runner-up in the nationals. He’d met Alfredo Popesco through Popesco’s younger brother who was already friends with him. The two families lived near each other. Now Popesco was 17, Senna going on 16, but the year’s difference meant that Popesco was already going out with girls. “Ayrton used to play ping pong and mess around in the street but he liked the things I was doing.” Namely, to “go out and meet girls, not just ping pong! Senna was ceasing to be a child and starting to enjoy the pleasures of the teenage years. He was a normal teenage, although not quite like the others of his age because he was a little bit ahead of them. They played football on the streets but he wanted something different.” 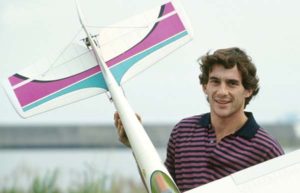 Popesco, whose family were decidedly not rich, studied at a school called McKenzie near the Colegio Rio Branco, and had started part-time work aged 13. Daily he trekked to McKenzie by bus while Senna travelled in a chauffeur-driven car. One time Senna Said hey Alfredo, would you like a ride home? Popesco said yes and the trekking was over. Now Popesco was regularly chauffeur-driven to and from school with Senna. ”

At the weekends Ayrton used to drive his kart and I loved that. He practised all the time, like on Tuesdays, Thursdays, Fridays and Saturdays and I went with him. We also liked to play around and flirt with girls.” Senna had model aircraft and model racing cars which they built together. Milton boutht Senna motor cycle — the one Monteiro saw? — and Popesco loved that too. “Ayrton never worked, because he was so protected by his family. They protected him a lot. But could see the potential he had, with the model planes, the toy cars and karts.”

The friendship was “like a movie where you have a rich guy and a crazy guy and they go around having fun together.” Popesco delighted in what Senna could do with a kart, Senna delighted in the social life of the slightly older Popesco.

“When Ayrton started to race outside Sao Paulo we’d travel together. We went to cities like Itu [55 miles north west of Sao Paulo] and Campinas [north west of Itu] as well as other places. There was a race at Natal [far up on the northern cost] and Ayrton won it. We were very happy and Ayrton was becoming a little bit famous. He’d already won several races in Sao Paulo. At Natal, however, we almost didn’t see each other. Ayrton was going out with one girl and I was going out with another. Ayrton’s girl liked to go out at night and my girl liked to go out during the day — so he slept in while I had go get up early to take my girl to the beach! Ayrton’s girl was more excitable, she was like crazy and mine was more correct – the good girl!

“We had so much fun. This was the time of our lives.”

“When we got back to Sao Paulo, Ayrton would stay in his garage showing me his kart until four o’clock in the morning. He’d mount it, dismount, mount it again. He’d have to get to practice at eight o’clock on Saturday mornings but all the time he’d say Alfredo, Alfredo, we have to go out on Friday to have fun but if I go out on Friday I have to leave the kart fully prepared and everything settled for Saturday morning. He knew every little piece of the kart and he did everything for himself, studied every little piece of it. Technically, he knew all about it. I loved those times with Ayrton, and Ayrton’s kart, and the races. He used to let me drive a little bit but I didn’t go to the races for the machinery, I liked Ayrton’s company and his friendship.

“When Ayrton wanted something he would persevere until he reached it. I compare it to [chasing] a beatiful woman. When you see a beautiful woman you’d love to be beside her but, if that happens, when you see her every day and get used to her it’s not the same thing as it was at the beginning” — when you have attained your goal you stop reaching. “Ayrton had a very, very important characteristic: that didn’t happen to him. If he’d worked for a big company he’d have worked and worked and worked to reach the top” — and never stopped reaching.”

“I was very good at ping pong. I used to go to a club called Esperia and I practised a lot. I didn’t have money to buy a ping pong table. Ayrton did, he bought one and we played each other. I won the first, second, third, fourth time and Ayrton started playing with my cousin, his own cousins, my hours a day and then when we played again sometimes I’d win, sometimes he’d win but he kept on practising, practising, practising, until one day I didn’t win any more. Ayrton won, won, won.

(“There is also another story, about ten years later at Angra dos Reis, Ayrton’s house.” This house was in fact a luxurious complex on the Atlantic. “There was a tennis court and one day a guy from Benetton played Ayrton and won. Ayrton played other people and lost to them: he was losing all the time. He got so upset that he started practising, practising, practising. Before that, hardly anybody had used the tennis court. Soon enough he was good at tennis and after he got good he called Benetton and invited the guy who’d beaten him to come Brazil for a march — so he could beat him!”)

Popesco taught Senna an invaluable lesson in how to negotiate from a position of weakness. It centred on water-skiing. “I had family in Santa Catarina [a State south of Sao Paulo]. I used to go there and learnt the art of water-skiing when I was 13. I didn’t have a boat but some friends did and we used that. Then Ayrton got another motor cycle — it was a Suzuki, a 185cc — and he liked to ride around the district. He’d have a little fall here and another fall there and his father decided to sell it.”

“I had an idea. Just tell your father it’s fine to sell the motor cycle, that’s OK, dad, you can sell it but I want a boat, a good boat. His father Mr. MIlton could give him that because they were rich and they lived near a lake. You’re going to lose the motor cycle anyway. I told him, so be intelligent, use it to get a boat!” “Mr. Milton was very strict”