If there ever is a circuit that truly tests racers, their mettle and talent, it is the lush, green, moody and depending on when you are racing there, treacherous Spa-Francorchamps.

1985 was a particularly odd year for the circuit. Formula 1 had traveled there in June only to turn back because the new track surface was all broken up and in a bad condition. They returned in September, this time under a cloud of controversy regarding the South African round. The weather refused to play nice and it was a wet, sodden Alain Prost who stood pole that race day. Ayrton Senna was the second fastest. It was going to be a wet race, and the drivers were out in their wet-weather-tyre best. 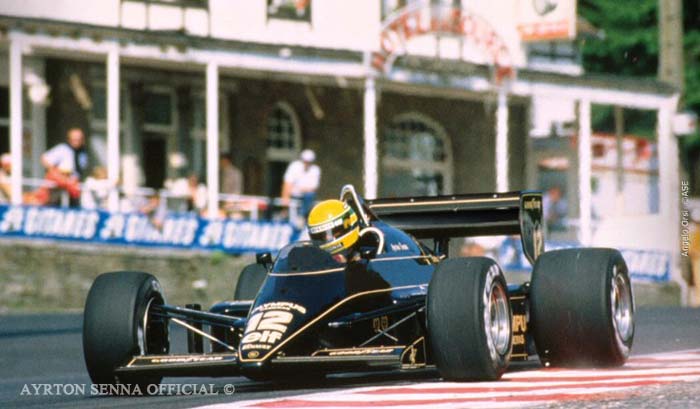 The stakes were high as well – at least for Prost who was leading the championship. His only contender was Ferrari’s Michele Alboreto. Crowd favourite Thierry Boutsen in the Arrows A-8 was the only Belgian participating. Niki Lauda was not racing because of an injuring.

The lights went off and the troupe raced down, vieing for first… anything to avoid the spray really. But it was Senna who grabed the first place, with Prost in the second and Nigel Mansell in the third. The Brazilian though had nothing to worry about, as he steamed ahead through the wet, but rapidly drying circuit. Prost however had Mansell nagging him until lap 4 when the British driver took 2nd place. Initially, the gap between Senna and Mansell was minimal, but it increased over the 43-lap race.

Soon, the track began to dry and Senna finally pitted to change tyres. He lost his lead then, albeit briefly, on lap 9, to his teammate Elio de Angelis. But Senna took back the lead in a masterful move. All was right in the world now, as Mansell elbowed de Angelis out of the way and took back 2nd place. And then, surprisingly, it started raining again… but only on some parts of the circuit. But that didn’t trouble Senna and Mansell, who were comfortable in the top two positions. Prost didn’t stand a chance, though he managed to wangle a 3rd after an interesting battle with Keke Rosberg.

There were 11 retirements that day with Prost clocking in the fastest lap.

This was Ayrton Senna’s second win of the season. It was not surprising that this spectacular run was done on a wet track on a rainy day at Spa – a circuit that sifts the boys from the men. Senna led for most of the race, barring one lap, and didn’t put a finger out of place. Startling too was the distance between Senna and Mansell – a whopping 28.422s, phenomenal because it was a track that often oscillated between dry, wet, and extremely wet.

The race is memorable because of the way Senna evaded the marshals and their yellow flags to go on a victory lap. But it was memorable too because of Murray Walker’s comment, as Senna cruised towards the finish line: The most serious, dedicated and contemplative man in Grand Prix racing,” he said. “And there’s a lot of them, but Ayrton Senna thinks, thinks, thinks all the time about his racing, about his car, about his tyres, about his lines…everything.”

“The car was very good,especially in the rain, and i’m so happy with all the team for my second victory this year”