Lewis Hamilton has always had a special relationship with Brazil – it was in Sao Paulo where he won his first F1 drivers’ championship in 2008 with a final corner overtake. This was renewed on Wednesday when the now four-time world champion touched down in South America ahead of this weekend’s race. Hamilton was presented with a miniature model of his Mercedes car, which also featured a painting of Brazilian F1 legend Ayrton Senna on the side. 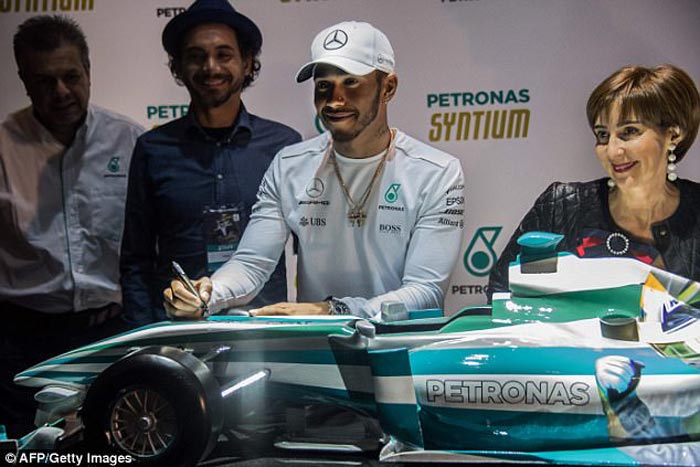 Hamilton this season surpassed Senna’s 65 pole positions in the sport at the Canadian Grand Prix, on his way to beating the all-time record held by Michael Schumacher. In Canada the family of Senna presented Hamilton with a racing helmet once worn by the three-time world champion, who died in a crash during a grand prix in 1994.

Hamilton therefore gave the Senna family the Mercedes replica, which was painted by Brazilian artist Eduardo Kobra. Hamilton then went on to describe his love for Brazil, which he said could be traced back to watching Senna in his youth.

He said: ‘I have a special affection for Brazil, because of Ayrton Senna. People around the world know him, and when they do not know about him I say, “Have you seen the documentary about Senna?” He is a great inspiration, always wanted to do something similar to what he did in F1.’

Despite his love for the country and being inextricably linked to the race thanks to the astonishing final moments of the 2008 season, when he won his first title, Hamilton has only won one race at Interlagos. That came last season, as Hamilton fought for the world title with then team mate Nico Rosberg. He has already sewn up the championship this season, earning an insurmountable lead at the Mexico Grand Prix.