The simmering tension surrounding the 1991 world title will reach boiling point in Japan. Ayrton Senna’s failure to clinch the crown in Spain will harden his resolve to finish the job in Suzuka. He feels he has been too lenient of late. I am sure Senna’s proclamations have Nigel Mansell shaking in his boots! Mansell is the only driver on the race track, in my opinion, who has the psychological measure of Senna. Senna managed to brow beat Alain Prost but he has failed to do the same to Mansell. 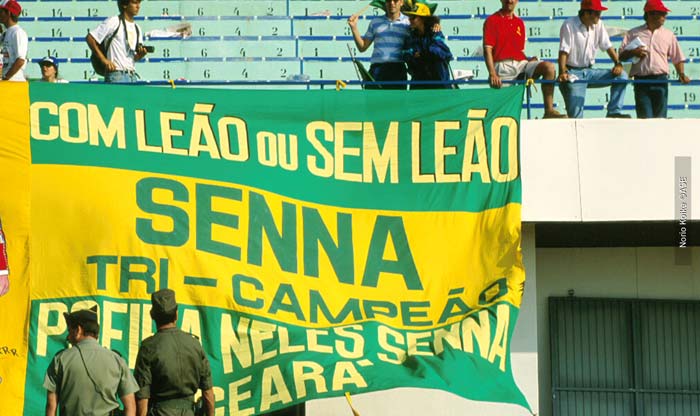 There is little doubt that Nigel Mansell has a car advantage over Ayrton Senna – but no more than Senna had over everyone for many seasons. But this race will not only be one of machines, but of character. Senna is the most complete F1 driver around but Mansell is the best racer at present. Both would make fine world champions and it is a shame one of them must lose. Mansell’s task is a simple one – if ever winning was simple. Senna has the easier job but faces extra pressure in Japan where Honda will be looking for victory in their home grand prix.

The Suzuka circuit is one of the most demanding on the Formula One calendar. It is considered a power circuit but is ultimately about handling and comprises a mixture of everything from a low speed chicane to a 170mph corner. There are two crucial elements to this race – qualifying and the first corner on the first lap. Pole is never more important than at Suzuka. For the credibility of the drivers’ championship, I hope it depends on the positions at the chequered flag rather than on any mishap in the first corner but emotions will be running high here.

Changes have been made to the driver line-up at Leyton House with Mercedes-Benz using their influence once again. Young sportscar star Karl Wendlinger appears in place of their number one driver Ivan Capelli. He and Mauricio Gugelmin were going to share the last two races but now Gugelmin will do both. In fact I feel rather sorry for the German who, at over six feet tall, is far too big for comfort in this car. Another worst kept secret has been confirmed. Since Tom Walkinshaw took over at Benetton, everyone has known that Martin Brundle would join for 1992.

The battle for the constructors’ championship could not be closer with Williams leading McLaren by a single point with two rounds remaining. While this may not capture the public imagination in the same way as the drivers’ contest, from the teams’ point of view it represents dollars and cents. Racing in Japan can be hit by wet weather. Not just a little rain but torrents of water! Unique wet weather tyres are available for local events but F1 tyres are not so deeply grooved. For everyone’s sake and safety, I hope the race on Sunday will be a dry one.

Ayrton Senna clinched the world crown as Nigel Mansell spun his Williams off the track on lap 10 at Suzuka. The Briton was challenging Senna for second place but went wide, tried to correct and ended up in the sand. Senna’s teammate, Gerhard Berger, took his McLaren into the lead from pole position while the Brazilian held up Mansell, who needed to win to stay in contention for the title. With Mansell out of the race Senna took over the lead but let Berger through on the line to claim victory.

Nigel Mansell’s title chase ended in a spin at the start of lap 10 as his Williams spun out of control to assure rival Ayrton Senna of the championship. The two McLarens powered into the lead with Mansell in third on Senna’s tail, looking for a gap to squeeze past on the twisting Suzuka circuit. But his eagerness to stake an early claim for the lead led to his downfall as he spun from the track. The Briton’s Williams was suffering from a soft brake pedal but that could not be entirely blamed for the mishap.

Brazilian Ayrton Senna made a grand gesture at the end of the race to allow teammate Gerhard Berger through on the line to win the race. McLaren’s one-two put them back on top of the constructor’s championship with Riccardo Patrese’s third place not enough for Williams to keep the lead. Berger had a clear lead from pole but a poor pit stop held him up and the Brazilian overtook him leading to a cat and mouse race between the teammates. Senna showed his high regard for his colleague as he handed him 10 points.

“I’m disappointed I’m not on pole but at the same time happy because there is so little between us at the front. I’m aiming to try and get pole tomorrow becuase the track is narrower than I remembered and it will be important be at the front for the start of the race,”

Ayrton Senna sealed his third world drivers’ championship in four years and paid tribute to his team. “It has been really tough from the fourth race onwards,” he said. “The result has come from a lot of push from me, Gerhard and the McLaren team. We stepped forward bit by bit and won critical races in Hungary and Belgium.” he added. “To do one and two here is fantastic, it was a great race and should stand as an example,” added the Brazilian.

Nigel Mansell was quick to applaud Ayrton Senna as he became the youngest man to join the elite ranks of three times world champions. Juan Fangio (five titles), Jack Brabham, Jackie Stewart, Niki Lauda, Nelson Piquet and Alain Prost have all joined the club. “Ayrton has all my congratulations. Gerhard shot off like a bullet, Ayrton kept me slow through the corners – all perfectly legitimate tactics,” he said. “It’s a pity things finished like they did but we cannot be too disappointed.”

Gerhard Berger won his first race for McLaren and his first since Portugal in 1989 after looking set to collect his fourth second place this season. Senna pulled over at the final corner to let his McLaren teammate through to take the chequered flag. “I must say thank-you to Ayrton for switching places,” said the Austrian. “I have been in that position and given way, it’s nice to know it cuts both ways,” he added. “It’s good for the future if both sides are working for each other,” he said.

Britain’s Martin Brundle finished in fifth place in his Brabham Yamaha, his best for two years. He moved into sixth place by lap 24 and when Germany’s Michael Schumacher went out on lap 35, Brundle tussled with Stefano Modena to finally claim fifth spot by lap 45 of the 53 lap race. “I’m absolutely delighted, it’s one of the best drives I’ve ever had,” said Brundle. “I made a good start and caught people napping.” Romford’s Johnny Herbert failed to finish in his Lotus Judd.