Ayrton Senna really wanted to win his last race with McLaren and have the team break Ferrari’s legendary record. He did it, indeed. But in reality, the Grand Prix of Australia 1993 was also to be his final race win. 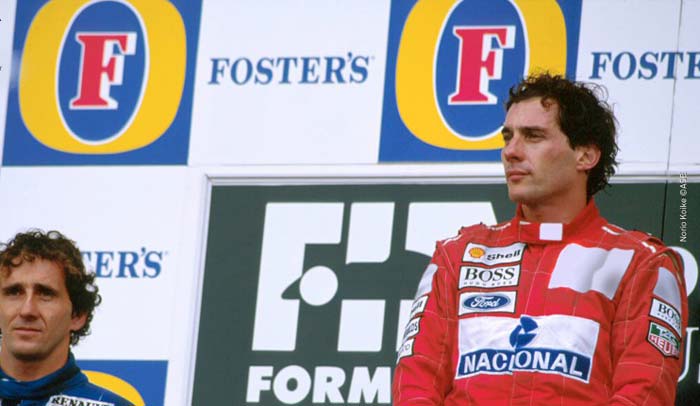 There was so much at stake. The 1993 Australian Grand Prix was to be Ayrton Senna’s final race for McLaren after six seasons. He wanted to end on a high, and not just for himself. Victory in the underpowered McLaren-Ford MP4/8 would be McLaren’s 104th world championship-qualifying grand prix win. A win that would break Ferrari’s all-time record as Formula One’s most successful marque.

Although the MP4/8 was underpowered, there were compensations: it had an immensely capable chassis that handled beautifully. And in combination with the skills of the triple world champion, it could still win races. However, there was added piquancy around Adelaide that weekend, for the grand prix was also the swansong of a former McLaren shining star, Senna’s often bitter rival Alain Prost, who was ending his career with Williams-Renault.

The McLaren team arrived in Adelaide fresh from a fine first and third place in Japan. New recruit Mika Hakkinen had demonstrated real promise, while Senna’s victory had been coloured by a subsequent scuffle with that other new boy, Eddie Irvine, after “unmannerly” driving by the Ulsterman. As practice began, Senna found a pair of boxing gloves laced to his McLaren’s steering wheel. He saw the joke – but the emotional end-of-an-era charge around McLaren’s garage could only grow. Senna was seriously hyped up, and aggressive questioning in the press conference about the Japanese contretemps merely heightened these tensions.

As he went for his time in qualifying, the McLaren pit was in turmoil. As Ron Dennis recalls:

“We were convinced that he didn’t have enough fuel on board to complete another flyer and were desperately radioing him to slow down.

” Senna confirmed it: “I knew that I was low on fuel and I was calling but never got any reply. My radio button was stuck, so they couldn’t talk to me.” In the pits: “We were screaming to him to back off, but all we heard was this continuous stream of expletives – throughout his quick lap.” Despite these dramas, he did it again. Senna claimed pole position for the 62nd time in his glittering career.

On the starting grid, he liked to inch himself really tightly into his car, to mould himself into the centre of its very being. But this time – this tense, emotive time – Senna’s routine changed. Team co-ordinator Jo Ramirez: “Ayrton suddenly called me over to fix his belts. He looked at me very intently and said: ‘I feel really very strange doing this for the last time in a McLaren.’ It was an emotional moment. I said: ‘You just win this for us and I’ll love you forever.’

“He instantly grabbed my arm, squeezed it really hard, and his eyes filled up. Mine did, too, and I thought: ‘Oh shit, now I’ve upset him. Of all the moments!’ I feared I’d ruined it, for sure…”

Two aborted race starts wound the tension ratchet even higher. But from the green light, Senna rocketed into a lead he would lose only briefly. After the first pitstops his lead peaked at 33.8 seconds before he paced himself to victory – though not before surviving a couple of stomach-wrenching moments as his engine cut out twice in the tight hairpin. Prost was second, and world champion for the year.

When these two had been feuding team-mates at McLaren, Ramirez was one of the few who found it easy to be friends with both. “Now as they went up on to the podium,” he recalls, “it was great to see them both make the effort, hugs and handshakes and warm words. And when Senna came back into the garage it was all tears of relief and happiness. We had won and broken the record, but he was sad that it was his last time for McLaren. He told me: ‘It was lovely what you said before the start. It nearly broke me. It was another test I had to overcome.

Senna gave Ramirez his hat, and the Brazilian flag he had picked up from somebody on his victory lap. In the post-race open air concert, Tina Turner pulled the former McLaren driver out on stage as she sang Simply the Best.

Ramirez still has that moment on video at home. To this day he cannot watch it.