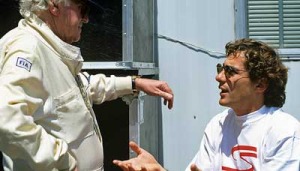 On the twentieth anniversary of the great Brazilian’s tragic death, I have found myself devouring every article, hoping to glean some small but significant extra insight into his life.

It’s dawned on me since that this is a bit odd, especially as I’m not really one for keeping idols. Senna and me obviously never came into contact while he was alive. I never saw him up close or far away, I certainly never talked to him. I suppose what is incredible then, is the amount of influence he has had over my life in spite of all this.

Of course, he was gone fewer than three years after I was born, but his shadow stretched over the period when my obsession with F1 really started to solidify. Mine was the first generation that saw Senna not as an exceptional racing driver or a sporting tragedy, but an almost mythical figure. As a young child, his memory drove home the point to me that people who drove racing cars were willingly risking their lives, and that this was both incredible and perhaps a little bit foolish, and thus commanded a lot of respect. More generally, to a four year-old boy, Senna’s greatness was also a powerful lesson in the fleetingness, and preciousness of life.

Nonetheless, Senna was far more than just a sports star who died, and the beautiful and tragic sides of his life reach far beyond the realms of motor racing. This was a man who was elevated to the status of a minor deity in his native Brazil, and more than earned that status through his commitment to the children of his country, which still continues to this day. He also possessed something more esoteric; a spiritual quality that played out in his insatiable desire to not just beat everyone else in the car, but also to better himself in the process. This came out in the magnetic way he spoke and presented himself, but its greatest expression was the unique skill he showed on the track.

On another level, Senna had power over me as a visual icon. His F1, from the yellow helmet to the beautiful, sleek red and white Mclarens he drove, has since become the aesthetic ideal of what is an extremely aesthetic sport. F1 in the early 1990s had great looking cars, that spat out sparks and sounded like monsters. Senna epitomised this, to the extent that it’s always seemed a little suspicious to me that – with one exception – he always found himself driving a beautiful car.

It’s for this last reason, oddly, that I think Senna will always have a place in the public consciousness. Because when I’m done reading tidbits about his clashes with Prost, his charisma and his willpower, the things in those magazine articles that really commanded my attention were always the photos. There’s something sublime about them, and in many ways, they give a better account to me of what Senna means than anything else could. In my eyes, he always looks best in motion; car poised on a knife edge around every corner, fighting on the limits of adhesion. It’s this, more than anything else, that made him truly awe-inspiring as a driver, and while I will always regret never seeing him race in the flesh, the simplest snapshot of him skipping around Lowes hairpin or down the Rascasse, will never lose its capacity to amaze.