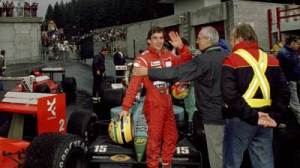 The 1st of May this year marks the 20th anniversary of an event that rocked the world of Formula 1 – and indeed the sporting world in general – the tragic loss of Ayrton Senna.

The Brazilian driver was an iconic part of motorsport and his death at the age of 34, following a crash at the San Marino Grand Prix at Imola, changed the sport for the better. His legacy lives on in sport, and ultimately the changes that came about as a result of his death have lessened the likelihood of a similar event ever happening again.

With the Spanish Grand Prix next up for the current crop of drivers, it marks an opportunity for fans all over the world to remember Senna, and what he did for Formula 1.

Remembering one of the very best

The three-time champion was loved by many in the racing world and none more so than in his native Brazil, where his popularity rivals that of footballing legend Pele. Even in death he is still revered, and his record of 41 wins and 65 poles is bettered only by a special band of drivers. Indeed, only Michael Schumacher can boast more pole positions, yet his career spanned almost twice the length of the charismatic Brazilian. During a ten-year career, Senna developed a reputation as a highly passionate driver with a pure talent for the sport, although critics have also suggested he took exceptional risks as a result. What made Senna’s death even more tragic was that it was only a day after Austrian driver Roland Ratzenberger had been killed in qualifying, at near enough the same spot known as the Villeneuve curve.

The Grand Prix at San Marino in 1994 represented one of the darkest days in Formula One history, but the sport emerged from the tragedy in a new light. Officials forced through sweeping changes, improving safety at every circuit and making the cars safer too – a tragic lesson had forced the sport to take note. Now, twenty years on from that weekend, motorsport is an entirely different spectacle – the reforms made in the aftermath of Senna’s death mean the sport has never gone so long without a fatality. It’s just a catastrophic shame that it took the death of one of the world’s greatest racing drivers in order to achieve that.