Ten years after he first drove for Frank, Senna has finally been reunited with the Didcot team, this time to race. But what did happen at Donington in 1983?

It was a cool, dry day, Tuesday July 19 1983. Donington Park was bathed in weak sun, and conditions were favourable. Two days earlier Alain Prost had just won the British GP at Silverstone for Renault, beating Nelson Piquet and Patrick Tambay. In the Formula Three clash, Brazilian sensation Ayrton Senna had just trounced Briton Martin Brundle again (although the latter would turn the tables several times thereafter in a fantastic year).

It was a good summer, and Donington was ideal for a young man having his first Formula One test. Frank Williams had had his eye on Senna since the beginning of the season, as he wracked up win after win in the F3 series, and now he brought him together with one of his FW08Cs, a development of the car with which Keke Rosberg had won the 1982 World Drivers’ Championship, and in which he had only recently won the Monaco Grand Prix. It would be a sensational combination. 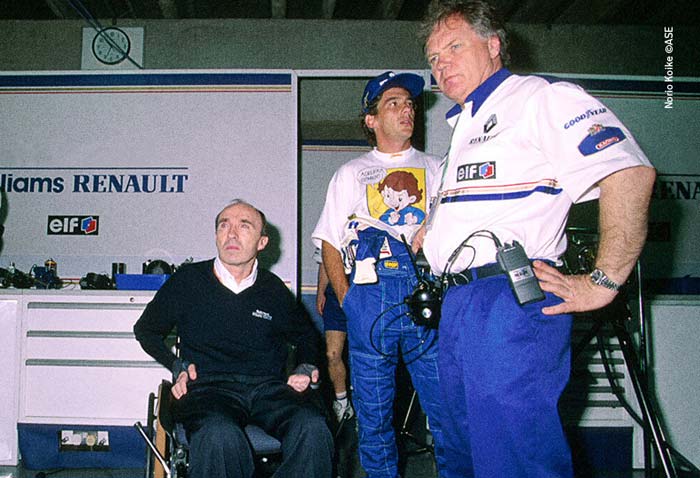 A couple of days later, Senna assessed it quietly. “It was everything I could have wanted. I learned a lot, got some consistent laps in and benefited from having Frank Williams there to watch over everything.”

At the time, Frank himself said: “He took to it like a duck to water. It was very easy for him.”

Further on down the road it is easier to place that quiet little test in its true perspective. There were only two photographers present that day, incredible as it seems, for it is easy to see it now as the start of something big.

Robbie Campbell was second man on the spare Williams that year. “Charlie Moody was in charge of the car, and Alan Challis was there too. I knew Ayrton already, through Emerson Fittipaldi. He was always hanging about with him and we’d seen him in Ford 2000. I used to kid him he had a big engine in the car but, of course, he hadn’t. He was just quick.

“That day he went round Donington faster than anyone had ever driven a Williams, and really, he wasn’t trying too hard because he didn’t fit the car. It was Keke’s and he was a really cramped fit.

“He was very confident, but he wasn’t pushing too hard. I think he might have had one spin at the chicane, but that was all. He never touched anything. I knew he was gonna be quick…” Frank, naturally, has never forgotten that day. Ten years later his recall is still precise – when he wishes it to be.

“My recollections are coloured, though, because my car broke down two junctions before Donington on the M1. My Jaguar. To be fair, the factory came and picked us up and sent a new car to the circuit later in the day…

“Ayrton? He was quick immediately. You could tell he was the real thing. I think it was within nine laps that he equalled Jonathan Palmer’s best lap set some time before, which was 61.6s or 61.7s.”

Frank thinks he drove no more than 30 laps, although at the time our story mentioned 83. Whatever, Senna exuded confidence, even with Frank playing an unaccustomed role as Ingegnere Williams.

Some who were there recall little tests Senna was put through. “There were some funny bits,” said one observer, our photographer Steven Tee of LAT. “They changed the time board three times, because they couldn’t believe how fast he was going! After that I think there might have been a couple of things to slow him down a bit, because everyone thought he was going too fast. They kept refuelling the car, things like that, to keep it heavy. I think they might have changed the suspension geometry and the wings a couple of times too, without telling him. Nothing nasty, just little things to see if he noticed. To test him. He did notice. He spotted them all.”

“I don’t recall doing anything to the car,” counters Frank cautiously. “I didn’t know much about engineering one – still don’t – so I didn’t pay too much close attention to all that. I have no capability in that area! As far as I remember, we ran him with a standard fuel load, 10 gallons in those days. About 45 litres.

“But at one stage he came in, towards the end of his run, and told me that he thought the engine was nearing the end of the road. He said the note had changed and he didn’t want to risk breaking it.”

Later that year Senna approached the line at Silverstone during a McLaren run that was his prize for winning the Marlboro British F3 Championship, blowing the engine as he did so. Asked by Ron Dennis why he hadn’t lifted off, he replied: ‘I was on a quick lap…’

“He was totally confident,” continues Frank. “He was giving it one. I think Motoring News had a photo of him with the left front on the rubbing strip under braking for the chicane…

“By the end he had lapped in 60.9s, even though he was a tight fit in Keke’s car, because Ayrton is slim and Keke was quite broad and short. Obviously the guy was a bit different. It was all pretty easy for him, getting down to our previous best time within 10 laps. I certainly went away very impressed.”

“He was mega under braking into the chicane,” says Tee. “He was getting on the brakes really, really late. Using all the track, to the point where he ran out and just touched the entry kerb there a couple of times. But he only spun once on the exit.

“Looking back now it’s amazing how young he looked, and how few people were there to see what we now know was an historic event. It was just one of those really relaxed days. Today there’s so much aggravation attached to similar things, but it was all different then . .”

And there hung the tale until the Tuesday after Monza, September 14 1993 when Ayrton Senna is reputed to have done the deal that finally placed him in a Williams. All of 10 years and three World Championships after his first F1 test with the team.