If you were given a pound for every time you thought to yourself, or someone said to you, “There’s no overtaking in Formula One any more”, you’d be a rich man by now, wouldn’t you? Except that if you’d been at Donington on 11 April 1993, you’d have been forced to eat those words and donate all the pounds you’d accumulated to a charity of your choice.

On that day, and in rather less than one lap, one man proved that it was possible to overtake, even in the era of electronic ‘gizmos’, such as traction control and ‘drive by wire’, since banned from Grand Prix racing. On that day, and on that lap in particular, Ayrton Senna made a nonsense of the criticism that F1 placed too much emphasis on the machinery and not enough on the man. 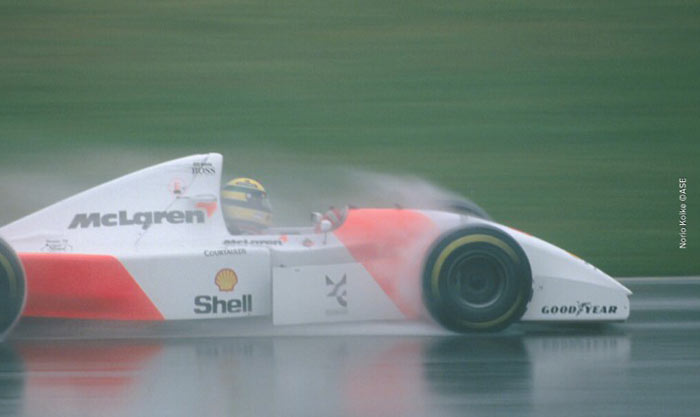 Senna started the European Grand Prix at Donington Park the first Grande Epreuve the circuit had hosted since Tazio Nuvolari had driven an Auto Union to victory there in 1938 – from fourth place on the grid. Ahead of him were the two Williams-Renaults of Alain Prost and Damon Hill, and the Benetton-Ford of Michael Schumacher. This was Senna’s sixth season with McLaren, but the first without one of Honda’s glorious engines behind him. In 1988 he had won the world title with the last of Honda’s V6 turbos; in 1990 he’d done it with Honda’s V10 and the year after with the new V12. Now, since the Japanese firm’s withdrawal from Grand Prix racing, the McLaren team had been forced into the temporary expedient of buying Ford’s HB V8 and to a specification inferior to that enjoyed by Benetton. It was a state of affairs that led the experts to predict a lean time ahead for the McLaren team.

What the first minute of the 1993 Grand Prix would demonstrate, though, was that McLaren was far more dependent on the man behind the wheel than the engine driving the wheels. On this occasion, power meant little and the other factors grip from tyres, downforce from aerodynamics appeared to mean even less. This was about driving, about the fed for a car’s balance and point of no return, and, perhaps most of all, about sheer nerve.

If Senna didn’t have the best engine or, indeed, the best chassis in the field, he didn’t lack for nerve. And on this day he had a wild card to play. It was wet. In the wet Senna seemed to have come from another planet, he was an alien of extra-sensory perception beamed down to make a mockery of racing drivers from Earth. His extraordinary feel for a car in slippery conditions had been apparent from his early days in Formula Ford 1600, and had played a part in several of his Grand Prix wins, but at Donington that day we saw it in its most undiluted and spectacular form.

He didn’t make the greatest of starts. Schumacher, one place ahead on the staggered grid, moved smartly over to the left hand side of the track to find the best line around Redgate and to block the red-and-white McLaren. As the cars streamed out of the long right-hander, throwing up huge plumes of spray in their trail, Senna found himself in fifth, with the Williams pair of Prost and Hill up front, followed by the Sauber-Ilmor of Karl Wendlinger, who had got away well and dived inside Schumacher and Senna at Redgate to snatch third.

Senna came out of Redgate on a tight line, drawing up alongside Schumacher as they blasted down the slope and towards the Craner Curves. It didn’t look like a shrewd move. The McLaren was well off the racing line and on the wrong side of the track for the approaching bend. And yet, incredibly, Senna didn’t lift off and tuck into the stream; he simply put his foot on the gas, out-accelerated Schumacher and just drove around the outside of Wendlinger. Where mere mortals are concerned, 99 times out of 100 a move like this ends somewhere in the gravel trap, but this one didn’t. As the leaders stood on their brakes for Old Hairpin, Senna was already in third place and you could almost see the eyeballs popping under the visors of Schumacher and Wendlinger.

There was just time to remember the way Jacky Ickx had driven an old Lotus 72 around the outside of Niki Lauda’s Ferrari in the wet at Brands Hatch Paddock Bend in the 1974 Race of Champions, before Senna made his next move. Through Starkey’s Bridge and McLean’s corner the McLaren was right up under the gearbox of Hill’s Williams, almost obscured by the spray. As they approached Coppice, a long, daunting, double-apex right-hander, the red and white car popped out and powered past. There was nothing frantic or edgy about this manoeuvre; it was simply a case of one car travelling much quicker than another.

The rain-soaked procession cut its way down Starkey’s Straight and through the Esses with Senna gaining hand over fist on Prost. Into the fearsomely tight Melbourne hairpin and the McLaren plunged for the inside line and braked later – much, much later – than the Williams. You had the feeling that Prost had spent the whole straight looking in his mirrors and that he didn’t like what he saw. The Frenchman’s turn-in to the hairpin was tentative where Senna’s was all commitment, and when they exited the corner it was somehow no surprise to see the McLaren in the lead.

There it stayed – apart from a few pit-stop interrupted laps – until the end. Senna’s victory that day owed much to his ability to assess the rapidly changing weather conditions, and to lap as quickly on slicks as his rivals did on wet rubber during the intermittent showers. But in truth, that race was won on the first lap, when he made a monkey of the conditions, an inferior car, his rivals, and the well-peddled notion that it’s practically impossible to overtake in modern day Grand Prix racing.