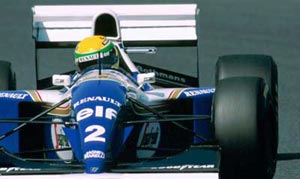 Formula 1 mind coach – Don Macpherson recalls his experience at the San Marino Grand Prix on the ill fated weekend in 1994, that resulted in the deaths of two drivers, and changed the sport forever.

I am at Bologna airport for the San Marino Grand Prix. I wait 1 1/2 hours for the person who has kindly offered to collect me. He doesn’t turn up, so I get a cab to the circuit. Not a good start to the weekend, but surely things can only get better, can’t they? I arrive at the circuit to see Rubens Barrichelo has launched his Jordan F1 car into the catch fencing at 140 m.p.h.

He was very lucky to survive such a violent crash. I had done a deal with Russell Athletic an American clothing company, to sponsor the Simtek team. 40 of their VIP guests were attending their first Grand Prix and watching from behind this fencing…they were luck too. But surely things can only get better, can’t they?

I am standing behind the fencing where the Russell Athletic guests had been when Barichello aimed his car at them. It is qualifying, and I am waiting for the two Simtek F1 cars to come round. Then, suddenly it all went very quiet…no cars coming round. Must be a big accident. I had a strange feeling it was a Simtek, but which one? David Brabham, who I was managing at the time, or Roland Ratzenberger, a lovely Austrian racer, who i had said good luck to a few minutes ago? Eventually a purple Simtek car came slowly into my view. David… but no Roland… he never came round. He was such a top bloke and a very fine racing driver.

Surely things could only get better, couldn’t they?

Race day, there could have been a fault with Roland’s car, David Brabham’s car is made from the same parts…will it break at 195 mph…. he can’t be sure……to drive will be risky to say the least. We spoke about it the night before…..’do you think I should drive?’. I felt ill equipped to answer such an important question at the time, perhaps nowadays I could have been more helpful…..but even so it was a question only he could answer. The upside of driving was that it would massively lift the whole Simtek team, the downside was David was putting his life at risk. His wife Lisa was also carrying his first child… what I did not tell David, and never have, is that as I was leaving the track the night before I saw the team manager jumping up and down on David’s front wing! He had already reinforced it with several bolts. I asked him privately…’is this car safe, do you think David should drive tomorrow? ‘ sadly he is no longer with us… so his answer stays with me.

Surely things can’t get any worse, can they?

David decides to race and completes the morning warm up safely. This brave courageous, selfless act, visibly lifts the shattered Simtek team. He knew he was taking a big personal risk. Top driver, even topper bloke. So, now I am now standing with the lovely Lisa Brabham watching the restart of the race in the Simtek garage. There was a massive shunt at the original race start resulting in parts of cars vaulting fences into the crowd. Things are still not getting better…….but they can’t get worse, can they?

I can’t remember what I said to Lisa, or she to me, when Senna crashed, but we both soon realised he was in big trouble. I think she gave me the water bottle to take to David, who is somewhere on the track…..I go to find him.

So now I am sitting with David at the starting grid, on the grass verge alongside the track. Just the two of us…….not talking much, waiting for the restart. Then Senna’s car is brought back from the scene of the accident, on the back of a truck. David and I silently watch it going past us. A very poignant moment, as by now it has become clear things are not looking good for him. Eventually the race is on again. Schumacher wins, but even he doesn’t seem bothered about the result. David retires with ‘car failure’ after a few laps…….but at least he is safe…..and this time, finally, things did not get any worse.

The old lady with the kind face, but sad eyes, reaches into the draw and gives me a McLaren-Honda sticker picturing Ayrton Senna’s F1 car. In a voice weakened, and faltering through sheer exhaustion and worry, she beckons me to sit down at the desk at the back of the room.

She is Ayrton’s ‘maid’, but in reality far far more than that. She has been with him for many years, but now she is alone and frightened. What will happen to her now? We all fear the unknown, but she really isn’t in a good place..

I am in Senna’s house a few weeks after the San Marino Grand Prix claimed his life, and we are in his office surrounded by trophies and lots of F1 memorabilia. This is the house he left to drive in his Honda NXS (the 1st delivered to Portugal). In 15 minutes or so, he would be on his private jet based at Faro airport on route to Bologna. It would never return…

We are still in Senna’s office, the friendly old lady with the sad eyes, and I. I sense it’s time to leave even though she may appreciate some company, just somebody with whom she can ‘talk it through’. She gives me a tour of the rest of Ayrton’s Portuguese hideaway. She tells me the house is exactly as it was on May 1st… waiting for Ayrton to come home. Why, I ask as gently as I can?

My religion dictates I must see the body before I know for sure death has occurred, she replied. She had watched the race on the TV in the sitting room (with Ayrton’s girlfriend). I can only imagine the scene in that room when the crash happened and the subsequent lingering camera shots as the medics worked on him.

She came to the main gate with me, and I thanked her for allowing me these special moments, and wished her well. I hope the Senna family looked after her, I’d like to believe they did. As I reached my hire car I turned my gaze back to the house, she was still there…..one last smile and a final wave goodbye, from the kindly friendly lady with the sad eyes. I hope people didn’t forget her, especially in her time of need. I’m glad I haven’t …