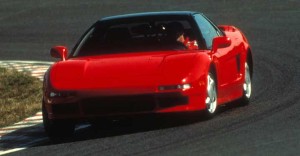 It took the touch of a master to create Honda’s masterpiece.

You’d hesitate to use phrases like “half-baked” about an automotive legend, but when the Acura NSX bowed at the Chicago Auto Show 26 years ago, it wasn’t quite done yet. Had the cherry-red machine that sat proudly spinning on the turntable been sent into production as-is, it might still have been very, very good. For a masterpiece, though, you need the touch of a master. Luckily, that’s just what happened.

In February 1989, right around the same time the demonstration car was dropping jaws with its svelte, mid-engined looks, a gaggle of Honda engineers were waiting with polite expectation to hear a positive verdict on one of the company’s most ambitious projects ever. It was called the New Sportscar eXperimental, and the engineers were confident that they wouldn’t fail to impress the newly-minted Formula 1 champion driving their creation. The team had just completed an entire month at the Suzuka Circuit and considered their all-aluminum machine to be as forged and honed as a katana.