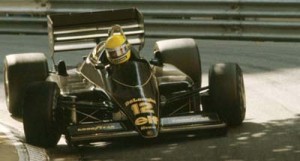 The moment Ayrton Senna crashed at Imola is something I will never forget. I can still picture myself sat on the sofa watching the TV, surprise, turning to concern, turning to shock.

At the time, I was working as a reporter for a local newspaper in Driffield, East Yorkshire. I had been a solid F1 fan for a few years, an interest sparked by coming downstairs to see my dad glued to the television.Senna, Prost, Mansell, Piquet — these were all names I grew up hearing, and then watching.

Being British, it was Nigel Mansell, of course, who was cheered on in our house. But while he represented the British Bulldog spirit for me, Senna was this exotic, serious sportsman, someone for whom racing seemed something more than just driving a car very, very fast. When I watched Senna drive, it felt like I needed to pay attention, like I was watching history, someone who would be talked about for years to come in hushed, reverent tones.

But in 1994, when he went to Williams, I began to wonder. Why wasn’t he winning? Was Senna’s flame beginning to dim? Then came the crash. Suddenly, it was all over. I didn’t know at first of course. Like any F1 fan, I’d seen worse crashes, much worse. But the drivers would always climb out, and life would go on. Senna didn’t climb out of course. How I wish he had, but he didn’t.

A couple of days later, I was in the privileged position to be a journalist with an exclusive story on Senna’s death. His personal pilot and close friend, Captain Richard Mark Naylor, lived in East Yorkshire and gave me an interview. I heard from him about Senna the man, the friend. It made him real to me, when always before he had been almost a myth. The memories of that time still make me feel sad, sad that I had started to doubt Senna, and sad that he couldn’t carry on being a friend to people, as well as an exceptionally exciting racer.

His legacy, of course, is that no F1 drivers have died since in a Grand Prix. Hopefully, that will never change.