Ayrton Senna did things with a racing car that I’ve seen no other driver do, before or since, and there was an obscene level of horsepower in those days. There is one memory, one snapshot, that is seared on my memory for life, even though it lasted only two or three seconds. It was early in his career, at Brands Hatch, and he was on one of those bolts of lightning single-lap efforts that he used to put in. 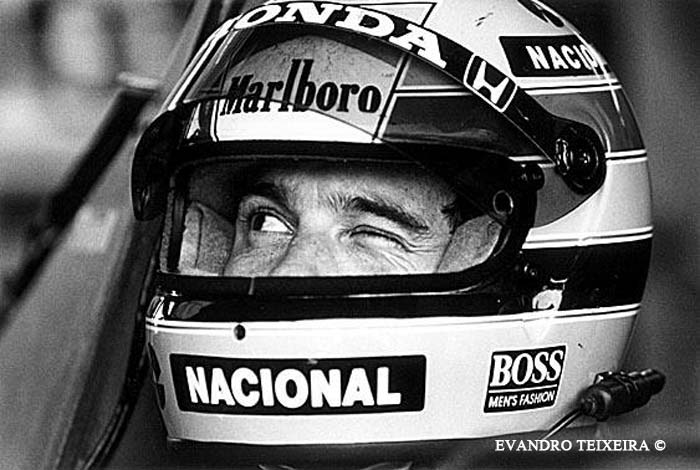 When you reach the bottom of Dingle Dell you can’t see the apex of the next corner. You have to anticipate it. Senna was absolutely mesmerising. It was not only the speed he was carrying but the way he controlled the car, changing gear, turning the steering wheel and using the throttle to keep the turbo boost from dropping away. And remember, we had conventional gears, clutch, break and throttle in those days.

To do one thing at the speed he was going would have been something but to multitask the way he did was remarkable. I don’t know how he did it to this day. He had this wonderful mental capacity to put a number of inputs into the car at the same time. And he was frighteningly quick. The way he made the car dance on the track that day reminded me of the rain jumping on the street in the title track of Singing in the Rain. It was wonderful.

Racing drivers change as they get older. Experience teaches caution, if you’ve got a brain. Through experience and tragedy you assess risk in a different way and become inherently more careful. You start to think, rather than react. But in those early days Senna just had a fantastic instinct to drive the wheels off the car.

I was commentating when he died at Imola in 1994. It was the worst weekend that many people can remember, starting with Rubens Barrichello, who had his spectacular accident in qualifying, then the death of Roland Ratzenberger and finally Senna. It was no normal race either. There was a shunt at the start, then a restart and a safety car. And all the time there was the pressure Senna was under from Michael Schumacher.

There was the suspicion that Benetton were using traction control, though that was never established. But Benetton was a very good car and much easier to drive than the Williams at that point. So Senna, who was highly competitive anyway, had to do everything he possibly could to drag the necessary performance out of his car.

But once he had veered off the racing line at the high-speed Tamburello corner the distance to the wall was relatively short. I remember thinking what is going on? I don’t think it was driver error on Senna’s part. And then for him to get struck on the head too didn’t seem feasible.

If he had not lost his life in 1994 we would have seen a phenomenal battle for the title that year, one I think Senna would have won, because as the season progressed Williams responded well to the problems they had. I’m sure Senna and Schumacher would have gone for it as everyone had anticipated. I think Senna was prepared to drive for Williams for two or three years. He was looking to equal Alain Prost’s four championships and maybe have a go at [Juan Manuel] Fangio’s five.

But he was 34 and had already laid the foundations for his life beyond Formula One, which involved Audi franchises in Brazil and other business interests, so he may not have been around for much longer. He would not have continued into his forties. Physically, mentally and emotionally he had taken a lot out of himself. He wasn’t ready for retirement but he wasn’t a long way away from it.

At the beginning of 1994 the Williams car was a handful to drive and Senna was disappointed, to say the least. But by the end of the season it was pretty good. Looking at how it developed in 1995 and 1996 the door was open for two more world championships for Senna, apart from what might have happened in 1994. So he could well have won six titles.

His death was such a tragedy. He was a unique man, a highly intelligent man who would have loved the complexity of today’s cars. He had this intensity, and the Latin, South American aspect, the religious influence and the looks that all made him a little bit different.

He looked like a racing driver. He wasn’t just some geeky little guy. He had all the qualities needed to be the best racing driver of his time, and that is exactly what he was. And he was also the fastest and the most exciting.