1991 season saw big progress by the Williams Renault team that had it running close to the McLaren Honda team that had won the Drivers’ and Constructors’ Championship titles four years in a row. The Drivers’ Championship of that season appeared to be a one-on- one fight between Ayrton Senna in the McLaren-Honda and Nigel Mansell in the Williams-Renault. Mansell came to Suzuka for the 15 th and penultimate round of the Championship in a situation where he had to win two races in a row, the Japanese Grand Prix and the final, Australian Grand Prix, in order to get the Championship title. 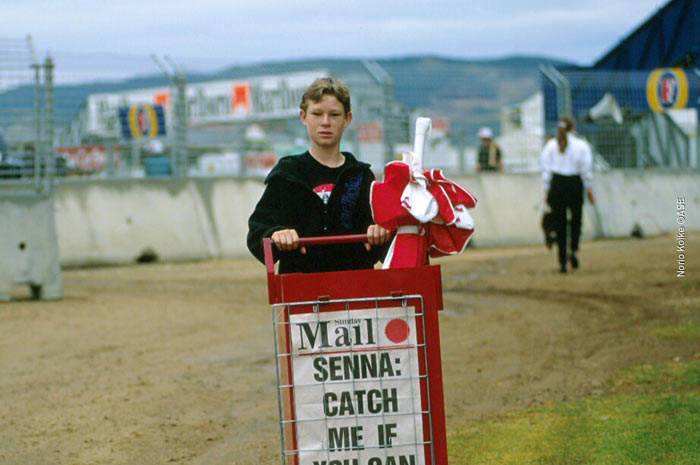 Gerhard Berger, Ayrton Senna’s teammate, stood between the two title contestants. Having clocked the fastest lap time in the first qualifying session, Berger set a time of 1 min. 34.700 sec. to smash the circuit record lap by over two seconds and claim pole position. This amazing new record remained unbeaten for ten years until 2001, when Michael Schumacher in a Ferrari bettered it. Senna qualified second, just 0.2 seconds behind his teammate. Mansell was slightly slower than Senna and could only take third place.

When the race started, Berger got away directly from pole position. Senna held second place, blocking Mansell. If they finish in this order, the Championship title would go to Senna. Mansell had to overtake Senna and pass Berger, who was running far ahead at this point, in order to keep alive the possibility of taking the title in the last round. Flustered, Mansell tried to approach Senna at the first turn on lap 10, after having tucked in behind him on the main straight. But, Mansell ran off the track and had to give up the race. The psychological tactics of Berger and Senna had been perfectly successful to induce Mansell’s self-destruction.

This decided the Championship titles; Senna won his third Drivers’ title, McLaren-Honda took the Constructors’ title for the fourth consecutive year and for Honda, this was the fifth consecutive Drivers’ title. From that point on, Senna caught up with Berger and passed him to take the lead. Senna, however, slowed his pace when he entered into the final lap. Berger returned to the tail of Senna’s machine and the two McLarens appeared from the last turn in nose-to- tail formation. Berger overtook Senna just in front of the finish line to receive the checkered flag for the win. A checkered flag scene for friendship, which is still talked about even today, was witnessed by 148,000 spectators.

Having joined the McLaren Honda team as Senna’s teammate in 1990, Gerhard Berger had performed well to make battle at the front in many races. Berger made seven podium finishes that year and in 1991 he climbed the podium four times heading into Japanese Grand Prix. But the Austrian driver had not won a race for two years in order to support the championship contender, Ayrton Senna. Senna gave the win to Berger in appreciation of his support in this race where he clinched the Championship title.