This footage goes to show that when you put everyone in the same car, in this case, the Mercedes 190E 2.3 Cosworth, Senna finishes on top. At this point in his career, he had only had three F1 starts and was the British F3 Champion.

This wasn’t a race against some of his rivals in his age group, this was against the world’s best. Senna at the age of 24 and three F1 starts under his belt, smashes a field full of champions and race winners. Here are just a few of the massive names that Senna beat in this race…

An unbelievable feat for anyone, let alone a rookie! Also a special mention to Niki Lauda who finished 2nd, as he had to come from almost the back of the grid. 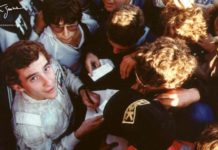