If Formula One power output was measured exclusively in terms of brake horsepower per pound sterling expended, then there would be no question as to who produced the best grand prix engines over the past 20 years. That accolade would go to Brian Hart, the Harlow-based technical wizard whose private F1 engine preparation business survived as a gallant independent before being swallowed up by Tom Walkinshaw’s Arrows empire in 1998. 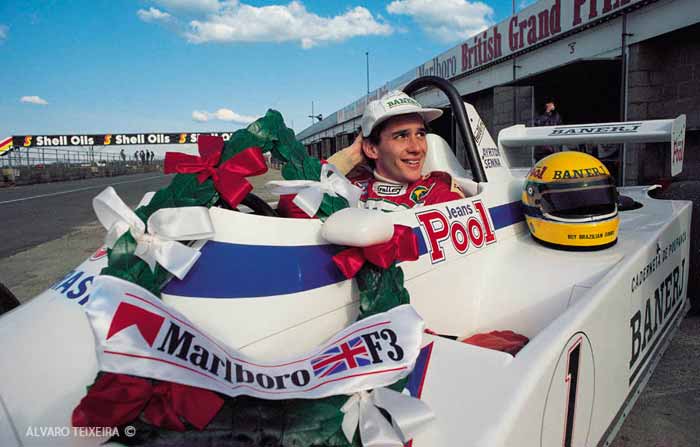 Much of Brian’s time in Ft was spent fighting against the prevailing tide, trying to squeeze precious test and development work from threadbare budgets insufficient to provide a day-to-day living, let alone invest anything for the future. And yet Brian’s is not a story of unremitting gloom. Far from it. Back in the glorious summer of 1984, his tiny engineering company came close to upending the Fl form book in dramatic style. Thanks to the Toleman TG184 and a shy, cautious young man who carried on him the stamp of greatness. His name was Ayrton Senna da Silva. In 1979 Brian Hart Limited built the superb 2-litre, all aluminium, 420R four-cylinder engine which powered Brian Henton’s Toleman TG280 to the European F2 Championship title. Having dominated the F2 business, Toleman’s far-sighted chairman Alex Hawkridge set his sights on Fl. But this was the start of the turbo revolution and, despite advice to the contrary, Hawkridge wasn’t about to saddle any emergent Toleman Grand Prix squad with an outdated Cosworth DFV. No, he reasoned, we must do our own turbo. And Brian Hart is the man to do it

It was a painful process of technical gestation. The first Toleman-Harts appeared at the 1981 San Marino Grand Prix, the fourth round of the season, but not until Monza, the 13th, did Brian Henton manage to qualify one of the ungainly TG181s. In 1982 the team steadily gained credibility, with Derek Warwick scoring Toleman’s first championship points at Zandvoort in ’83. By then he was committed to switch to Renault in 1984. But Toleman need not have worried. Hart takes up the story. “Late in 1983 we were testing at Silverstone when Alex arrived in the Toleman helicopter accompanied by a young man with remarkably intense eyes who had been blowing everybody away in F3. Alex said, This is Ayrton Senna, our new driver for next year.’ I was very excited, as I’d been to a couple of F3 races where he and Brundle had been battling it out. Clearly the guy was super-talented.

“This was absolutely typical of Alex. Who else could have pulled off something like this? Ayrton had tested for Williams and McLaren, but Alex managed to persuade him that he should be driving the Toleman. Alex was really amazing.”

By the start of the 1984 season Rory Byrne, Toleman’s chief designer, had really got a handle on the flat-bottomed aerodynamics with the new TG184, but the real story of that year was Ayrton. Hart was totally knocked sideways by the self-assurance and meticulous mind-management displayed by the man who would come to be regarded as the greatest grand prix driver of his generation. Even during these early days, all the right signs were there.

“What an incredible bloke,” remembers Hart to this day, “as well as being an unbelievably quick, motivated and complete racing driver. He rang me up in the winter of 1983/84. ‘This is Ayrton,’ he said. ‘As you know, Alex has signed me. I want to know all about the engine, what boost we’re going to use, how I should drive it.’ “I thought, ‘Hang on, you haven’t even driven it yet!’ But this approach was characteris tic of his determination to understand every detail of the car he would race. “One of the problems in early 1984 was that we didn’t have sufficient manufacturer clout to get the right turbochargers. Both cars suffered turbo failure at the first race in Brazil and Ayrton was pushing even then, asking, ‘What are you going to do about it?’

“Eventually we became desperate and I think it was Alex who realised that Iveco trucks, who were sponsoring the team, used Holset turbochargers for their products. So I went to their factory and met Steve Miller, who subsequently went to Cosworth.” Holset were initially a little reluctant to get involved in the programme, but the Toleman team’s enthusiasm and sense of purpose won them over. Just four days later, Brian returned to Holset and came away with some turbos, after which the team enjoyed virtually perfect reliability through to the end of the ’84 season

We had that superb British GP at Brands Hatch where Ayrton finished third behind Lauda and Warwick. Gerard Ducarouge, Lotus’ chief engineer, came up to me and said ‘Brian, you’ve got the best driver. But you’ve also got a bloody good engine.’

“At that time we also got involved with Zytek, again pushed by Alex, who helped us enormously on the electronics development side. It was all storming along extremely well, with Ayrton obviously the inspiration for the whole operation.”

Of course, the highest spot of Toleman’s ’84 season came at Monaco, where Ayrton was narrowly beaten into second place by Main Frost’s McLaren as the race was flagged to a premature halt on a nearflooded track.

“Despite Senna crossing the line ahead of Prost, Clerk of the Course Jacky Ickx stopped the race so the order on the lap before gave victory to Prost,” remembers Hawkridge. “My enthusiasm for Fl never recovered from that cruel blow. Brian deserved that win, as did the team.”

Hart is more self-effacing, having quickly come to realise that Senna’s technical grasp of Fl was in another dimension compared with some of the drivers he’d worked with. “To be honest, it didn’t take us long to work out that Ayrton’s talent easily outstripped the technical potential we could offer him,” he reflects. “I’d seen the first signs of this at a test session we ran at Donington Park just after the Brazilian Grand Prix. The technical feedback he gave us was just astounding for a guy who had done just a single Fl race. D+

“Even then, I think we knew that the bloke was going all the way to the top, but I think the clincher was that third place at Brands. He decisively outdrove several people whom he had no right to beat in the car-engine combination we provided. From then on, Ayrton cemented the whole thing together and we went to races knowing we could get the job done. We built some special engines for Hockenheim and we were going to blitz it.”

Ayrton later reported it had been easy. He had the Toleman-Hart TG 184 running right up there with Lauda’s McLaren-TAG and the Lotus-Renault of Elio de Angelis. Then the rear wing broke and he spun into the barrier approaching the Ostkurve. It was a big shunt.

Hart recalls Senna coming back to the motor home in a very pensive mood. Clearly upset that the car had suffered such a dramatic technical failure, he was even more disappointed over losing the chance to show what he could do. That was the moment, thinks Brian, that Ayrton realised he would have to consider a move to another team. “Ayrton had remarkable mechanical sensitivity,” recalls Hart with relish. “I remember he was doing fuel mixture control tests at Brands Hatch and he could feel the response of the engine. We would check it all out on the dyno, and he would be right. He told me, `I use the rev counter perhaps for fifth to sixth, but in all other gears I just wait until the boost gauge is at the right point. I can feel the engine struggle a bit, and I stick it into the next gear.’

“He would just read everything off that was in his mind the moment he got out of the cockpit. He wouldn’t come back in the evening and say ‘oh, and by the way, I remember so-and-so.’

“Then we went to Zandvoort and heard Ayrton had signed this pre-agreement with Lotus for 1984. He was always very emotional about his first Fl season, and in later years would reflect on what it meant to him, but Alex got very upset about the Lotus approach and suspended him from the Italian GP. He just couldn’t take it in, couldn’t believe it.”

Yet Senna tried his utmost for Toleman right to the last race, the Portuguese GP at Estoril, and drove a fantastic race to finish third behind the McLarens. Brian remembers it fondly: “After the race I walked up the pitlane to see Ayrton on the rostrum, and Creighton Brown of McLaren came up to me and congratulated us on our achievement. ‘It’s a shame he’s going,’ he remarked, looking up at Ayrton, ‘but he looks as though he absolutely belongs up there.’ He was right about that.”