Ayrton Senna was the best and most charismatic racing driver of all time – and my friend from my McLaren days. I still remember how the track spokesman called out my name on the grid in Imola on May 1, 1994. All the Tifosis roared in excitement. I was driving at Ferrari then. Ayrton looked at me and it seemed to be that smile went over his face. It would be his last smile. 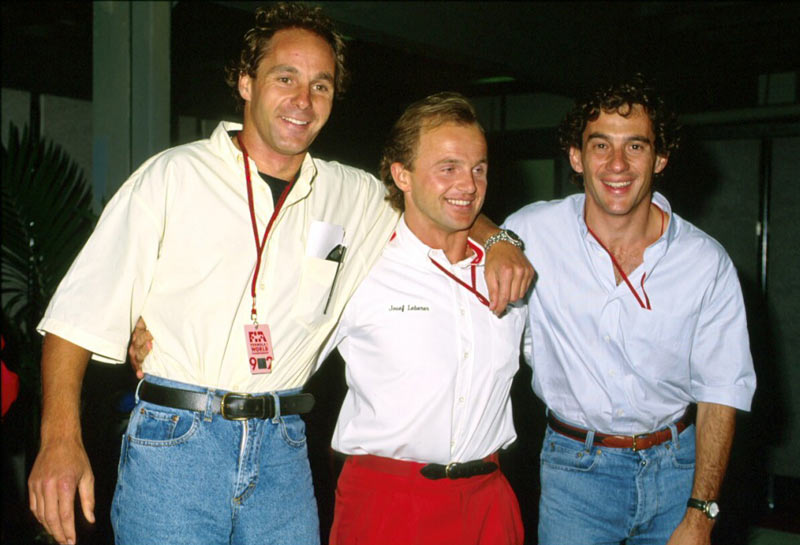 I’m still wondering what happened that weekend. First Barrichello’s serious accident, then the death of Roland Ratzenberger. And on Sunday Ayrton Senna. My next memory is how I drive past the scene of the accident and see him spinning along the wall. From my cockpit view, it didn’t seem so serious. Back on the gird after the crash, Bernie Ecclestone told me that Ayrton got out of his car which meant among insiders, he was OK. I wasn’t worried anymore.

After I dropped out of the race, I was sitting on a workbench when I learned that Ayrton was dying. I did everything to organize a helicopter ride to get to the hospital in Bologna on time. I wanted to see him again to say goodbye. He lay on the operating table when I arrived. A few doctors stood around his head, his face covered. I knew whatever hit him had killed him.

I am often asked how Senna really was. First of all, he was a man with enormous charisma. As a racer, he was the best I’ve ever competed against. A perfectionist!

On the one hand, he was a man with insane emotions and always feeling that he was right. On the other hand, he was cool and thoughtful. He had no mistakes and no weaknesses. When he was fully focused, he felt no pain, no tension. He seemed in another world we could not enter. That’s probably why was so unique. Each of us knew that if he showed up behind us, he would take the first opportunity to overtake. Most of them jumped away when they saw the yellow helmet in the rearview mirror.

At that time, Ayrton opened all our eyes. He was the first to train pit entries within the training session in training. In winters, he prepared himself for the new season at 40 degrees Celsius. He jogged 15 kilometers every day. The rest of us spent some time prancing around during the winter months. But when we came to Brazil for the season opener, we could hardly breathe because it was too hot for us.

In addition, Ayrton always used the tachometer to change gears, even in dense starting crowds. In this way, we was able to change gears to perfection which gave him an advantage over those who had to concentrate on themselves, the opponents and everything else. He showed me what it takes to become a world champion. Unfortunately, I never had Ayrton’s seriousness and selfishness. Ayrton showed me my limits. I had the talent but I did not have his drive for perfection. One thing is certain: If you gave all the drivers the same car, he would always win. Too bad we lost him.