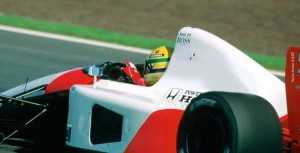 It was a first at the Circuit de Catalunya, the inaugural race, and the F1 circus loved every minute of it. The track pandered to the drivers, equally challenging them and their cars, while also promising, as Murray Walker put it, “magic for spectators”.

McLaren managed to get a toehold on Friday, but courtesy Gerhard Berger. Ayrton Senna tried his best to take the pole from his teammate, but couldn’t. Instead, brooms came out on Saturday after an oil spill courtesy Senna’s McLaren engine. The F1 pundits expected the new champion to be crowned at Spain – Senna was leading with rival Nigel Mansell 24 points behind him. The British racer however wasn’t going to give up that easy, and as the racers lined up at the grid, there was promise in the air – this was going to be a race we wouldn’t forget in a hurry.

The grid had Berger at pole, with Mansell at 2nd spot, followed by Senna, Riccardo Patrese, newbie Michael Schumacher, Alain Prost, Jean Alesi and the rest of the pack.

The lights went off and the race started with Berger taking off at the lead, even as Senna quickly passed Mansell to take the second spot. The British racer was on the Brazilian’s tail even as he tried his best to hold off a charging Schumacher. But the young German managed to wiggle his past Mansell and immediately started chasing Senna. The Brazilian refused to give way and Schumacher, by lap 4 had to make way for Mansell.

It became obvious that Mansell was going to make Senna work for his world championship. And so he harangued Senna, matching his pace almost, lap for lap. It was McLaren versus Williams, as the two battled – the McLaren tried to stay ahead and hold off the Williams. Up ahead, Berger was trying to make a quick getaway.

And then it happened, the kind of fireworks no one expected to see so early in the race. Mansell swung out from behind Senna, as the two went down the finish straight and matched his pace. Side by side they raced, almost touching, sparks flying, till they reached the first corner. Mansell had the inside line, and Senna had to concede defeat.

Things started looking up for a bit though until lap 14, that is. Berger was in the lead, but a slow pit stop saw Mansell take the 1st place. Then Mansell and Senna both took to the pits for a tyre change, with Senna taking the lead briefly, before letting Berger through. But it all went to hell on lap 14, as Senna overshot and spun into the gravel and slipped down to 5th place. Things wouldn’t really change much for Senna, who ended the race at 5th place. Mansell had managed to take the lead from Berger who retired soon after with electronic problems. The race finally ended with Williams ruling the podium, with Mansell taking the win and Patrese taking the 3rd spot. Prost took 2nd place.

The battle for championship was still wide open. The arena for this showdown would be in Japan. It was going to be a battle to watch.

There are perhaps a handful of moments in F1 racing that encompass an entire generation’s concept of racing…and of F1 rivalries. There is no doubt too that the 1991 Spanish Grand Prix gave us one such moment. Two masters, who had influenced and inspired an entire generation of racers, battled it out over one stretch, the start-finish straight. It was an event that was drama – perfect for television. Sparks flew as two cars battled – one a McLaren, the other a Williams, both contenders for the championship. They raced side by side, sparks flying, holding their own, playing their cars playing like it was a finely tuned violin, as they approached the corner at 195 miles an hour.

Ayrton may have lost that battle and even the race. He may have had to wait for his championship a little long. But at that moment, he demonstrated – as Mansell did – his sheer mastery over the machine. It was stuff of drama, of legend. And it lasted just a few seconds, a moment. But it was a moment to remember.

“Just watch the way the Englishman hangs in there, and fights it out with Ayrton Senna, his rival in the world championship. Both of them refusing to give way, but Nigel Mansell on the left has the inside line and if he can just stay there and of course he did, he goes through into the 2nd place… look at them at this speed because they are approaching the corner 195 miles an hour!”