Patrick Tambay already had over 70 Grands Prix starts and two wins to his name when the young Ayrton Senna da Silva arrived in Formula One. The Brazilian was widely heralded in the F1 paddock as the Second Coming, not least by Tambay. The Frenchman was no slouch – he drove for McLaren, Ferrari and Renault and traded paint with his great friend Gilles Villeneuve. But with rare humility for an F1 driver, he immediately recognised that the Brazilian was cut from a different cloth.

“I still admire Senna. Not only as a driver, but also as a person. First of all, because he achieved so much in the sport. But that was only a part of the overall package. He’s still remembered because people realised that he was extraordinary. Of course he also died in very dramatic circumstances which sticks in people’s minds.

“To me it was so obvious he was better than me – but it was not a problem. It had been the same with Gilles [Villeneuve]. I know that I can sometimes be too conscious of other people’s strengths and not mindful enough of my own, but it was clear. And Ayrton wanted to be the best around. It defined him.

“He was very serious about racing. He was very disciplined and expected the same of those around him. Even when he was relaxing, his competitive instincts would take over… ”

“Just ahead of the Austrian Grand Prix at the old A1 Ring, we were staying in Klagenfurt (Austria), in a hotel on the edge of the lake. As we had a little time to enjoy ourselves, the drivers got together. Ayrton was widely considered to be one of the best waterskiers in F1 [Senna holidayed at his family estate at the seaside resort of Angra dos Reis] but I was the Mediterranean waterskiing champion – so I fancied my chances! 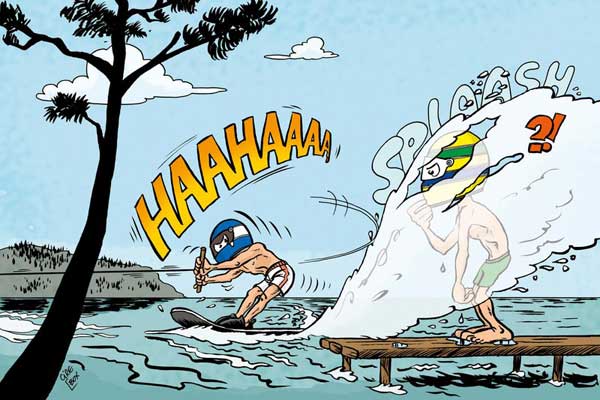 When it was his turn, he was actually very good: skilfully slaloming from left to right. So when it came to my turn, I knew I had my work cut out. He threw me the rope while I was still on the pontoon, I nodded to the driver who set off in the boat. I jumped off the pontoon, hit the water and pulled out two or three aggressive turns, a few of my moves, and looked back at Ayrton. He said, ‘sh…t!’ He’d met his master at waterskiing. But on the track, he was the boss!”

In an Formula 1 career that lasted from 1977 to 1986, Patrick Tambay saw six drivers killed. In the previous decade, there had been twice as many fatalities. Two decades have passed since Senna’s death and there hasn’t been another driver killed at a grand prix since. Despite the manner of his death, he continues to inspire. Lewis Hamilton, a confessed Senna fan, admitted that the risk of dying comes with the territory as a driver.

“It’s very honest, sincere and fair. It’s also realistic,” says Tambay. “We’re all aware of it and we all have to overcome our fears. Some are better at it than others. I think these days they have less to fear but it’s still dangerous. In our time we had to put it to the back of our minds. But it was always there. I had my share of close shaves myself.”

Patrick watched Ayrton Senna’s legendary performance at the 1984 Monaco Grand Prix from the comfort of a hospital bed after crashing heavily at Ste Devote corner.

“There are always elements that are out of your control, of course, but maybe the fact that I am here today is testament to the fact that perhaps I was not crazy enough!”

When Jacques Villeneuve lost his father at Zolder in 1982, it didn’t render him immune to the risks of motorsports. And yet he went on to become F1 World Champion and win the Indy 500. “It takes balls to race a car around an oval at 400kph. It’s the fever that will make Jacques do that .” 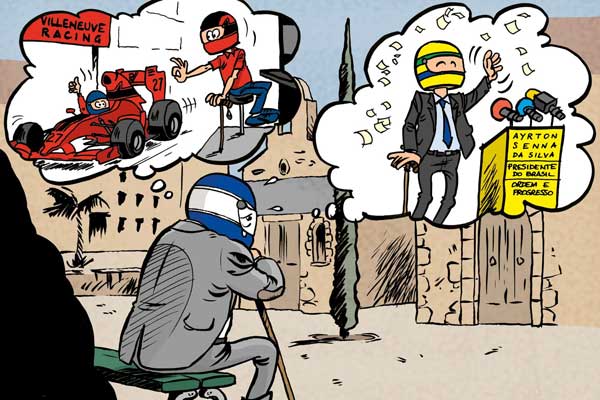 So what would the world be like if these legends were still with us? “A lot more fun, that’s for sure!” laughs Tambay. “Although maybe not so much with Ayrton because he was always such a serious guy. I think he might have gone into politics in Brazil or carried out the work his foundation does now, but at a government level – which would have made a huge difference to the plight of impoverished young Brazilians. Gilles Villeneuve would be tinkering with something: maybe he’d be the boss of his own team. That’s the biggest regret I have today: that I don’t get to grow old with them.”

But then there’s always hope in the next generation. Jacques Villeneuve is an F1 world champion, Bruno Senna followed in his uncle’s tracks to race in F1 and Adrien Tambay is now into racing.  So it seems that for Patrick Tambay, the road he has to navigate is the tricky one that lies between supporting Audi’s talented new driver and not placing a weighty ‘Son of an F1 driver’ tag around his son’s neck.