The artist and muralist Eduardo Kobra in a artwork made possible by Audi in Brazil, is preparing a tribute to the city of Sao Paulo: a mural with the image of Ayrton Senna, who will be inaugurated on November 11, the same week when the Brazilian Grand Prix is going on. 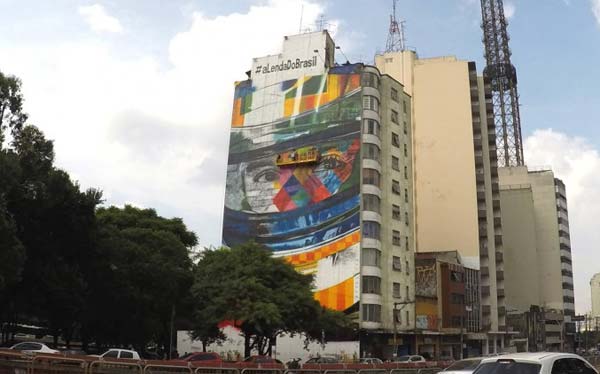 In a panel of 41 meters high and 17.5 meters wide, the renowned muralist Sao Paulo, one of street art pioneers in the capital, conducts the gigantic work portraying an expressive close Idol look for vibrant colors and modern spellings .The mural, which will take just over two weeks to be finalized, will grace a residential building in one of the most emblematic areas of the city of Sao Paulo, at the intersection of Consolation and Paulista avenues. Kobra and his team working on site daily from 8-19h, so that the work is finished on time.

“I have for many years the dream of making a large mural on this example of talent, determination and resilience. It is certainly the person most painted today. There were about ten small and medium-sized murals, plus a screen. Although I am not very connected to sports, Senna has always been one of my great idols. It is an honor to now hold a huge mural in Sao Paulo on this remarkable Sao Paulo and Brazil,” says Kobra, which has produced a mural for the Speedland, country’s largest karting complex, also honoring the national idol.In addition to the Senna image, the artist also painted a A3 Sedan with the same spellings panel. The vehicle will be on display in the Audi Lounge, located at Rua Oscar Freire, during the inauguration and will be exhibited nationwide at events and brand marketing.Subsequently, the car will be auctioned and the proceeds will go to the Instituto Ayrton Senna.

Ayrton Senna, considered a legend in motorsport and record of poles position in the GP Brazil (six in total), was responsible for bringing the German brand AUDI in the Brazilian market in 1993.

“We are honored to give this gift to the city of Sao Paulo. Besides idol of international sport, Senna was very important for Audi’s history in Brazil and this honor could not have come at a better time. Just start production of the A3 sedan in the country, so this wall comes to recall the history of the brand and reaffirm our growing success, “says Jörg Hofmann, president and CEO of Audi Brazil.