In the contemporary F1 Paddock, folk without enemies are hard to find. It’s a hard-nosed environment which can have a desensitising effect over the years. While not an absolute rule of thumb, those who thrive tend to be… self-centred, let’s say. There remain, though, some who are there because they love motor racing. Most will never get rich, but they are in for the long haul because they cannot imagine any other way of life. They retain a sense of humour, and they don’t tell lies. And in the press room, unsurprisingly, they are extremely popular, for however self-indulgent and rarefied F1 becomes, they remain ‘real people’. 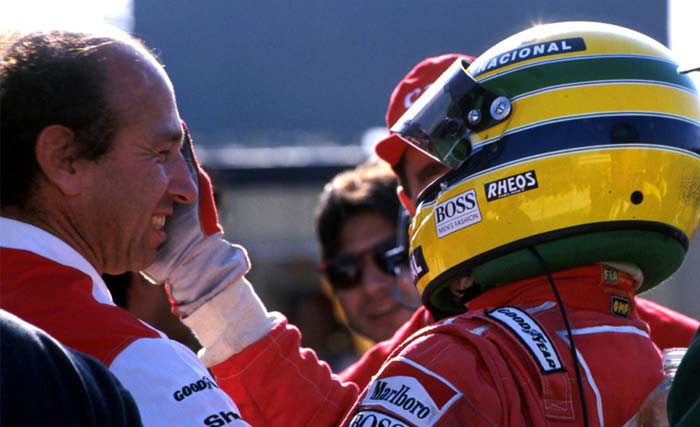 Jo Ramirez, outstandingly, is one such. Since the end of 1983, he has been Team Coordinator at McLaren, but his career in motor racing began long before that. A friend of Ricardo Rodriguez in their native Mexico, he came to Europe in ’62, when Rodriguez the precocious talent of the time got him a job as a ‘gofer’ at Ferrari.

“I flew to New York, then crossed the Atlantic on the Queen Elizabeth. It sounds crazy, but then it was only $200, much cheaper than flying…”

Ramirez believed Rodriguez was going to be one of the greatest. “He had huge determination, he was a fun character, and had fantastic natural ability. In ’61 he made his F1 debut for Ferrari, at Monza and qualified second! I was still in Mexico at that time, and he telephoned me. He said, ‘They ask me which gear I’m using in this corner, and when I start braking for that one, and I don’t know to tell them I just do it!’ He was just a boy, after all.”

At Ferrari the two friends worked together in 1962, and at the end of that year was run the first Mexican Grand Prix. When Ferrari declined to enter, Rodriguez, desperate to race in front of his own public, accepted a drive in Rob Walker’s Lotus. Fighting for pole position with John Surtees, he crashed to his death. Too broke to make the trip home, Ramirez was in Italy at the time. “It was a big blow for me, but time has a way of… cancelling everything. I was terribly upset, but by now I was too much involved, and I never thought of getting out of racing.”

After leaving Ferrari, Jo worked for John Wyer on Ford’s Le Mans cars, before moving to Dan Gurney’s new Eagle Fl tram in 1966. Gurney remains one of his gods. “A lovely guy and such a fantastic driver. Jimmy Clark used to say that if Dan had the right car, no one would see him. A real true racer, and hugely gifted.”

Eventually Gurney closed down the F1 operation, whereupon Ramirez relocated to America, where he worked on Dan’s Can-Am and Indycar teams, but he came back to England in 1971, returning to the employ of John Wyer, whose JW Automotive team was now running the ‘factory’ Porsche 917s.

“Ricardo’s brother, Pedro, was one of their drivers, of course. I never thought he had Ricardo’s natural ability, but he was a guy who just got better and better. He was more of an introvert than his brother, but! liked him a lot — and Jo Siffert, too. Neither had any interest in safety. Not at all.

“One Saturday in July that year, he and his girl friend were coming for dinner, but then he called to say he’d been asked to drive a Ferrari at the Norisring. Pedro could never turn down a race, and that weekend he was killed…”

The following season Jo joined Tyrrell, as chief mechanic on Francois Cevert’s car. “It was a very happy team. Ken was like a father figure to me, and I got on well with Jackie Stewart, too. As for Francois, he was similar to Gerhard Berger, in that he was very good looking, with a lot of personality and charisma. A super driver, who lived life to the fullest.”

More tragedy awaited, however, in this most perilous period of racing. Cevert was killed in qualifying at Watkins Glen in 1973 fighting Carlos Reutemann for pole. “Carlos beat Francois’ time, so he went out again — and he never came back.

“I remember someone saying, ‘Look, Wit’s any consolation, I saw it all, and he just overdid it — nothing broke on the car’. That made us feel a little bit better, but then Ken wanted us to check the car over, to be sure nothing had failed. I couldn’t do it. It was a mess in there, just awful…”

In 1975 Ramirez made the move into management, with the newlyformed Copersucar-Fittipaldi team in 1975, and after three seasons there moved to Shadow, where he became great friends with Elio de Angelis.

“Very similar to Cevert in many ways, Elio. Charming, completely genuine, a very good driver. For all his wealth, he was very down-to-earth person. He’d to come to my house, and play the piano — like Francois, he was classically-trained.

“Eventually, he moved to Lotus and Brabham, and I went to McLaren, but we stayed close, and I was shattered when he was killed, at Ricard in ’86. Even now it upsets me to think of it, the way he suffered — he wasn’t hurt at all, but he was trapped and couldn’t breathe, because the fire took all the oxygen. No one was there to put it out. Such a waste of a life.”

Anyone who’s worked in F1 for nearly 40 years has encountered tragedy many times, but Ramirez’s love of racing has never wavered, and perhaps what says most about the man is that, through the tempestuous Senna-Prost years at McLaren, he, perhaps uniquely, remained on good terms with both men.

“I’m sure it was because my relationship with them was based more on friendship than anything else,” he says. “I was between them and Ron — he did the negotiating, while I looked after their arrangements, anything that made life easier for them.

“I was fond of both of them, and sad when their relationship began to come apart. Not surprised, though. You can’t have the two top guys together without trouble eventually, and I think it was only because of Ron that the peace lasted as long as it did.

“The last races of ’89 were very difficult Main was convinced Ayrton was getting preferential treatment from Honda, and publicly said so. The response from Japan was to threaten not to provide Alain with engines, so Ron asked me to get together with Main, and organise a public apology — otherwise he wouldn’t be able to drive in the last races. We did that in a meeting at Gatwick — and Alain went on to to win the championship.”

Ramirez is not sure if there was any foundation in Prost’s suspicions. “Who knows?” he shrugs. “People used to say Main was a McLaren driver with a Honda engine, while Ayrton was a Honda driver with a McLaren chassis. Yes, I think Honda was biased towards Ayrton, but then he spent more time with them than Alain did.

“For me Senna is the best there has been, but there were races where Prost was superior. Ayrton himself would admit it — in private! That’s why they never lost this huge respect for each other. They never worried about Mansell or Piquet: they were in a different class, and knew it. When Frost had a sabbatical in ’92, Senna never stopped reminding us, “We’re just lucky that Main isn’t driving, because if he had been, we wouldn’t have won today…”

He says Senna could see Michael Schumacher was going to be trouble. “At Magny-Cours in ’92 Michael pushed him off on the first lap; later rain stopped the race and Ayrton read him the riot act. In the distance I could see Michael nodding, ‘Yes sir, no sir…’

“Ayrton came back all satisfied, saying, ‘Great! Got him just before he got in the car again!’ On the restart, Schumacher hit someone else, and retired on the spot… “All part of the game, isn’t it? Part of what we miss now. Personalities in the sport, I suppose. I still love racing, and always will, but it was so much more fun back then.”