Competing in only his third race for the British team – a partnership which was expected to see Senna add to his tally of 41 grands prix victories and three world titles – the Brazilian unaccountably speared off at the notorious Tamburello corner. He forcefully struck the concrete wall at speeds in excess of 130mph, the front suspension penetrated his helmet, and he died instantly. 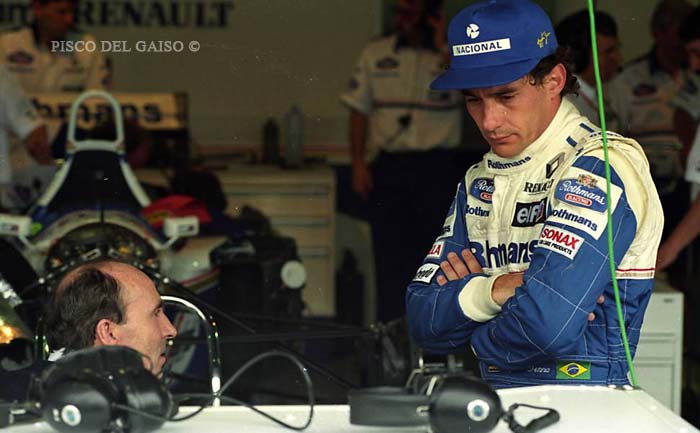 On track and unaware of the veracity of the incident, the 21 remaining drivers, including that of Senna’s Williams team-mate Damon Hill, returned to the starting grid with the race immediately suspended.

“I didn’t see the crash because I was a few lengths down the road,” reflected Hill, who was fourth at the time of the fatal accident.

‘I saw Ayrton’s car bouncing back off the wall, and it was never going to be a light tap if you went off at Tamburello because it was very serious to go off there. But that said, I didn’t get any sense that he wouldn’t have walked away from it.’

While Hill waited for the race to re-start, the full extent of Senna’s accident however, began to unravel. Indeed, out of sight of the drivers, attempts were being made to resuscitate the 34-year-old before he was airlifted to hospital. “I was told by Ann Bradshaw – the Williams press officer at the time – that it was serious and from that I deemed that he was in some sort of danger, but I think it was pretty clear he was already dead,” Hill recalls.

The Englishman was thus left in a unique situation; it was his team-mate – a driver essentially using identical machinery – who had, and without obvious explanation, veered off the track and died. Hill’s Williams mechanics desperately searched for any potentially catastrophic failings, but the tests were conclusive; there were no obvious faults with his car. Thirty-seven minutes after his team-mate’s fatal and unexplained crash, Hill was strapped back into the cockpit of his WIlliams FW16 as the race started once more. Hill would ultimately finish sixth.

“I had been a test driver for Williams before I had raced for them; that was my third year with the team so you learn to trust and accept the conditions that you race for guys in motorsport,’ he says when asked if withdrawing from the ill-fated grand prix ran through his mind.

“They build the cars and they are not going to compromise your safety so you have faith in the team. I trusted them so there was not an issue there, but I didn’t have any time to think about it. It was a case of the race getting underway and I wanted to get the best result I possibly could. But I don’t remember anything about it to be honest. “We just packed up and went home and that was just an awful, black day for the sport. It did seem quite pointless, even callous to carry on racing after that I guess. In reflection, it didn’t seem a particularly respectful thing to do.”

Senna’s death was pronounced at 6.40pm and came a little over 24 hours after Austrian driver Roland Ratzenberger’s fatal crash during qualifying. It marked Formula One’s darkest weekend since the 1960 Belgian Grand Prix. “The team had lost their star driver and the sport had lost a major star, a character, someone who people knew really well and got to know over time so from a personal point of view it was very, very upsetting’, Hill added.

“On top of Ratzenberger’s accident, the whole weekend was a dreadful one, and it forced a lot of reflection and self-analysis because I don’t think anyone wanted to carry on with motor racing if it was going to be like that; just about everything that could go wrong, did go wrong that weekend.’ Yet only 11 days later the sport was facing yet another fatality. Karl Wendlinger, a compatriot of Ratzenberger, was left fighting for his life in a coma after sustaining serious head injuries in a horror crash during practice.

“We had another accident of course in Monaco with Karl Wendlinger’s huge shunt, so it was just raining catastrophes,’ Hill adds with a laugh, designed perhaps to mask the distressing memory. ‘It was getting very difficult, quite apart from which we were all still grief-stricken by the loss of Ayrton, so everyone was numb and we went into autopilot, but it wasn’t the way to go racing.” While Wendlinger survived the crash, although he didn’t race again that season, Hill was left carrying a team rocked by tragedy; much in the same vein as his father Graham did following Jim Clark’s death 26 years previously. Indeed, from being the No 2 driver at Williams, the reigning drivers’ and constructors’ champions no less, Hill – with only three victories, comparable to Senna’s three world titles, was suddenly thrust into the championship limelight. Michael Schumacher had already emerged as the sport’s dominant force in a Benetton which faced persistent allegations over its technical legalities throughout the contentious campaign.

“Yes, definitely,” Hill replies when asked if the task of leading Williams carried more pressure. “It was not something in all honesty I ever anticipated. Although I wanted to see how I compared to Ayrton as I did with Alain Prost (his Williams team-mate in 1993) I never really seriously thought on a regular basis I would beat Ayrton but I was always hopeful.

“I had accrued 10 points from the opening two races and was now second in the championship with a chance of winning the title so I was catapulted into this championship contending role.” After watching Schumacher win the opening four races of the season, Hill became the beneficiary of a gearbox problem for the German in Spain, to take the chequered flag at round five of the championship, less than a month after Senna’s death. It sparked an emotional response on the Williams pit-wall, with the team’s chief designer Adrian Newey – who admitted last year that he is still haunted by Senna’s death – left in tears.

“Winning in Spain just managed to give all of us a bit of flavour as to why we race and compete. It also reminded us that is what Ayrton also wanted to do, and loved doing, so it was a turning point if you like in overcoming his tragedy, and re-directing the negative energy into a positive one.”

And so Hill did. He was victorious at five of the ensuing 10 races while rival Schumacher, continually dogged by controversy, was disqualified from two races at Silverstone and the Belgian Grand Prix, and excluded from two more. Following Hill’s masterclass in the torrid conditions at the Japanese Grand Prix at the penultimate round, he arrived in Adelaide, Australia for the final race of the season just one point shy of Schumacher’s tally. It had turned into a proper battle, but there was always this slight sense that we had to win out of respect to Ayrton; we had to give everything we could to winning,’ Hill explains.

“I had got so much support throughout the year from Brazilians and Ayrton fans saying that they were supporting me. I got a shirt sent to me signed by the entire Brazilian football team, too so I felt quite a big responsibility to the supporters of Ayrton.”

Hill hustled Schumacher throughout the opening 35 laps of the title decider before forcing the German into a race-ending error. Schumacher ran wide and struck the barrier. He returned to the track, but Hill, unaware of the damage sustained to his rival’s Benetton, attempted to pass him for the lead, and the title. The rest, of course, is now history.

“I think bearing in mind where Michael is right now and when I look back on events, things happen very fast in motor racing and people do instinctive things,’ a diplomatic Hill said.

“It was contentious, an even acrimonious season, and it ended in more controversy. A lot of people felt that was not the way to go racing but maybe I should have expected it rather than try to overtake; maybe that was the one that got away.”

Schumacher dedicated his title to Senna. Hill meanwhile, saw his courageous effort in a devastating season which shook the very foundations of Formula One, win the BBC Sports Personality of the Year Award. He returned to claim the world title with Williams in 1996 before retiring from the sport three years later.

“I really hope and pray we never have a weekend like Imola ever again,” Hill states. “It was horrible, but the sport has come an enormously long way since then. It changed the emphasis of Formula One in many different ways. It has now become more of a tactical game, one of skill, and less about courage and man vs himself.”

A poignant conclusion perhaps, from a man whose self-evident bravery in the face of the most tragic circumstances, saw him come within just one, solitary point of winning the Formula One title.