Ayrton Senna and Michael Schumacher both raced with a single-minded determination—even ruthlessness—that allowed them to become two of the greatest drivers in Formula One history…yet their legacies are very different. Senna is nearly worshipped in many quarters. Schumacher, meanwhile, does not seem to be loved outside Germany—not even in Italy, where he returned the revered national-icon Ferrari to dominance in the early 2000s. 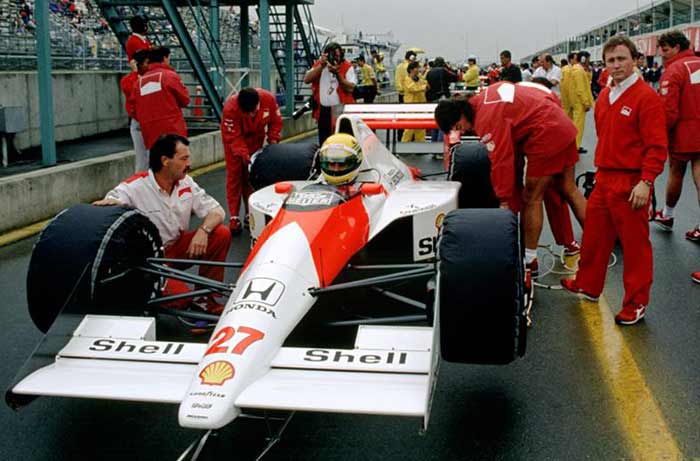 There are several reasons. First, Senna was killed in the middle of his career—his undiminished memory was frozen in time. In contrast, everyone witnessed Schumacher’s decline and his desperate attempts to slow it: parking his car in the middle of the track during qualifying at Monaco in 2006 and nearly planting Rubens Barrichello in the Hungaroring’s pit wall in 2010. These incidents only exacerbated the reputation Schumacher had already built for himself earlier in his career.

Second, Senna was romanticised during his career, and that, along with his incredible talent, allowed him to get away with incidents that would not have been accepted from lesser drivers. At the 1989 Japanese Grand Prix, Senna and Alain Prost collided, and the Brazilian was disqualified from the race, handing the title to Prost. The next year, at the same race, Senna drove into his French rival, taking both drivers out of the race and securing the world championship for the Brazilian.

Four years later in Australia, Schumacher took out Damon Hill, winning his first world championship when he escaped sanction for the manoeuvre. In 1997, at the European Grand Prix, Schumacher tried the same trick on Jacques Villeneuve. This time, though, the German ended up out of the race and disqualified from that year’s championship.

Senna felt vindicated by his decision to eliminate Prost from the race in 1990, saying,  “In ’89 I was robbed badly by the system – and that I will never forget,” he said in 1991. “But in 1990 it went the other way. It was a sad championship in 1990, but that was a result of the politics that we had in 1989 and 1990,” per the official F1 website. Although Senna felt he had been robbed, others, including longtime F1 journalist Nigel Roebuck of Motor Sport Magazine, believed the Brazilian was in the wrong in 1989, as well as the following year.

Schumacher was given the benefit of the doubt in 1994 but not the second time, in 1997. And the aftermath of those two incidents tainted his reputation far worse than Senna’s collisions with Prost did for the Brazilian. For example, a Google search for “Schumacher, cheating” turns up nearly twice as many results as a search for “Senna, cheating”—and many of the top Senna results actually refer to the allegations that Schumacher, among others, was driving an illegal car in 1994.

No doubt Schumacher’s reputation also suffered at the hands of some good, old-fashioned nationalism. For British media and fans, he may have represented “the enemy”—first as a German racing against Hill, the home favourite, and later driving for an Italian marque against the British teams. Senna, meanwhile, was defined by his rivalry against a Frenchman and brought victories, championships and glory to Lotus and McLaren, two of Britain’s most successful and most popular racing teams.

Senna’s reputation while he was alive, and his legacy since his death, also benefitted from his personality. His willingness to say exactly what was on his mind was very refreshing, certainly compared to modern F1 drivers, and even to his contemporary, the more sombre and calculating Prost. The Brazilian champion famously displayed these qualities in a (very self-serving) interview with three-time world champion Jackie Stewart, in which he discussed the 1989 and 1990 incidents with Prost.

Schumacher, meanwhile, was generally more reserved than Senna in interviews. While people responded to Senna’s passion, it was difficult to form a similar connection with Schumacher. Still, the amazing outpouring of sympathy following Schumacher’s recent ski accident also leaves every reason to believe that, in time, his transgressions will not carry nearly as much weight in the collective memory as his stunning achievements on the track.