When the three times F1 world champion Ayrton Senna won the Brazilian GP in 1993, his Home GP, it wasn’t a new thing anymore, he already won there in 1991 with an unbelievable race end. Only five laps were remaining for the end of the race and the Brazilian driver were leading it while Mansell, his main rival already had trouble with the hydraulic system of his gearbox and had a spun. The Williams team, aware of that, ordered to Patrese that he should slow down if anything seemed wrong with his car as well while the Italian driver didn’t know that Senna were in trouble as well.

The gearbox on Senna’s car became harder and harder and the MP4/6 that the Brazilian driver were in started to lose the gears, one by one until the moment that it become stuck into the 6th gear, making his race even harder. The public on the Grandstands were already feeling that something was wrong because of the sound that the car was producing and some of them even noticed the main thing: Senna weren’t changing gears! 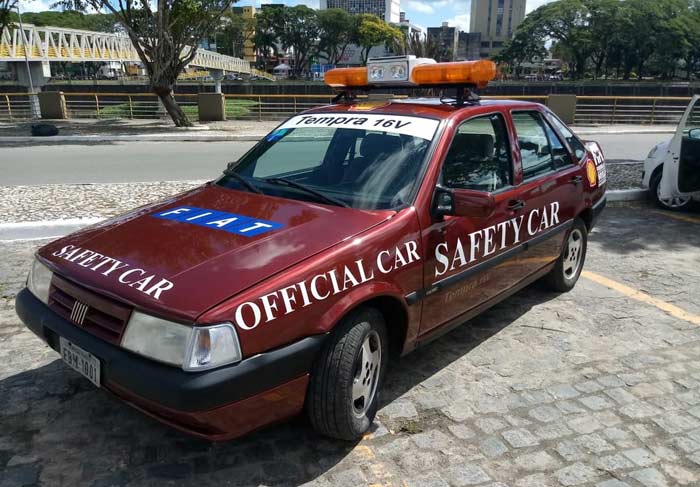 Even with that problem, the Brazilian driver finally won his home race and a lot of celebrations were done in a result of it so, a second one wouldn’t be as strong as this one, wright? Wrong! In 1993, Ayrton repeated the party with a safer race end for him (as his car weren’t with mechanical problems at this time) and another big celebration, but at this time with the Brazilian fans getting into the race track, surrounding the McLaren Ford when it stopped and Senna had to be moved to the paddock in the Safety Car, but why would you sit down in the car seat as anyone else when you’re Ayrton Senna, winning your home grand prix for a second time? In a race where the rain dropped and more, you were penalized earlier for overtaking under the yellow flag? The car door is there for you, wave for the world!

The car that Senna had a ride “in” to the boxes later, were a Fiat Tempra, a Italian saloon that had already one year of market on the European countries were it were sold, but it were being launched in Brazil in that year and some say that both the cars that were used in the Brazilian GP were prototypes and Fiat internals were worried about the possibility of a break down during his work, in the front of the whole world, but in the end everything ended very well for Fiat and their new car as the main driver of that weekend had a ride in it just after a amazing race that he won. Work done, and the car were very well exposed to Brazil and to the world, being sold until 1996 in Italy, 1998 in Brazil and 1999 in Turkey.

According to Ivan Gusmão, an entrepreneur from Itabuna, Bahia that are a massive Senna fan, after that Grand Prix, the car went to some Fiat dealerships in São Paulo for exhibitions and later, sold to an Italian descendant that knew that it were used as a safety car in that race, but as he weren’t a Formula One fan, he used it for five years until the moment that he sold the Tempra in 1998 for someone else and this someone else sold it again to another person that later sold again in a way that when Senna’s death completed ten years in 2004, even the first common owner of it decided to find it but it were already lost somewhere in Brazil as the follower owners didn’t knew the history of the car that they have been using as a daily driver.

As a massive fan of Ayrton Senna that not only named his company as “Senna” but also painted his company (a car shop) with the famous livery that Ayrton used in his helmets during his career, Ivan questioned himself (after looking some pictures) what end that car had and with the certain that nobody else made it or even had it preserved in a private collection, he decided in 2015 that he would find that car and in the same year, he started his searches and travels around Brazil that demanded not only money, but also hours and hours of time in searches and everything, without the help of Fiat, that although the call of Ivan, weren’t interested in it.

After some close calls, he started to say that he were looking for it as a tribute for his dad, that had the car (instead of saying that it were used as a Formula One Safety Car in a race that Senna won) and when it weren’t the one that he were looking for, he just answered saying that he didn’t liked it and moved to the next ones until the beginning of 2018, his efforts finally had a result. The car was found in the city of São Roque, São Paulo. It was under a three, had the self-explanatory nickname of “Fumaça” (Smoke in English) and it were completely unrecognizable. The hours and hours of searches and the five journeys had a positive result.

After the purchase, the car went to Itabuna, Bahia (Ivan’s city) and Ivan were so focused in his plain that he even refused an offer of an North American collector to buy the still unrestored car for 250 thousand BRL (Reais), ten times bigger than the price that he have invested in it (23,500 thousand BRL) and it have a reason: Ivan feels that it would be disrespectful if he made it just for the money and he wants to put it in exibitions, side by side with other objects that are related to his biggest Idol, Ayrton Senna.

The found of the former Formula One Official Safety Car become a big thing in the main news websites of the country and two months later, “Smoke” weren’t a nickname that could fit to the brand-new Fiat Tempra that now, are almost done. Light-bar, rear lights, the “Official Safety Car” lettering and even the Formula One race registration on the windshield are there. According to the owner, the hardest ones were the registration and the light-bar, that had to be home made and now, only two components are missing on the interior of the car: the light bar switches and the radio system.

Ivan had to look for every info that he could find about the car with Fiat, chassis number and number plates. The ones that were looking for were “FBM – 1001″ where every letter and number have a meaning. “F” are for “Fiat”, “B” for “Brazil” and “M” for McLaren. The “100” are there because McLaren completed 100 race wins in Formula One In in that Brazilian Grand Prix and the final number one goes for Ayrton, the race winner. “I have searched the car characteristics on internet and I have received a lot of photos. Those who fitted into those characteristics where the ones that made me travel to find them and it could simply be a “no longer exists” or out of sale, so at this point, another character were very important for the searching, Roberto Aranha. The driver of that Fiat Tempra during the 1993 Brazilian Grand Prix, who confirmed the infos that Ivan got.

“He found me and said that he had found that car. I saw the photos it and I confirmed that I drove that car and with that, we became friends. I congratulated him for the rescue – this is a pre-production model, I saw the number plates [and] I don’t have any doubt that this is the correct car”, says Aranha.

“It was still the beginning of the definitive Safety Car introduction in Formula One. During the race, the rain dropped, and seven crashes happened, so the Safety Car were deployed, everything ended fine. When Ayrton won, the crowd went to the track and surrounded him, making him stop and his car turned off, so we had to rescue him because he had a short interval to be in the podium for the ceremony. It was dangerous because there were a lot of people on the track and he were on the window. I called his attention a few times, called him back in but he said that everything was just fine and still we arrived at the podium on time. It was something completely new for everyone there because never before a Safety Car had to rescue a racing driver, never before a racing driver used a car door as a seat” remembers the former Safety Car driver.

Although the high prices that Formula One Safety Cars have been sold for, Ivan remembers that he doesn’t have any lucrative interests in the car, “When I announced that I had found that Fiat Tempra, someone told me that a Renault Clio Safety Car were Sold in Argentina for a really high price. The value of My Tempra will be bigger, but it isn’t for sale, independent of the value of it.”