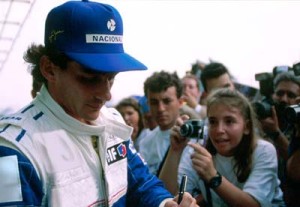 In March 1994, the Interlagos circuit in Sao Paulo, Brazil witnessed the hotly-anticipated first race of 1994.

It promised to be the beginning of a new era following the banning of active suspension, traction control and other driver aids.

But despite the change – which had arrived following months of political wrangling – few expected to see the new rules lead to new winners. This was because there had been little competition to speak of for much of the preceding two seasons. Williams’ mastery of electronic driver aids and Adrian Newey’s use of them in the service of generating downforce had propelled them far beyond the chasing pack.

Their 1992 car, the FW14B, was so fast the team postponed introducing its successor because it wasn’t needed. Nigel Mansell won the drivers’ championship in August and the following year his replacement, Alain Prost, was similarly untroubled as he picked up a fourth crown.

So while the sport had been shaken up in 1994 by the banning of driver aids, and an unpopular new gimmick had been devised to ‘spice up the show’ – refuelling – few expected Williams to have lost their way over the winter. But no team was better prepared for the new formula than Benetton. The B194 had been testing for over a month before Ayrton Senna put the first miles on the FW16.

Michael Schumacher, already a two-times race winner, had sussed the refuelling variable during his days in Mercedes’ sports car team. Team principal Tom Walkinshaw and designer Ross Brawn had done the same while running the Jaguar XJR-14s of Schumacher’s rival team. Together they were about to spring a surprise on Formula One. Twelve months earlier a rain storm in Sao Paulo gave Senna the chance to put one over the Williams drivers. Now he was driving for them, and when the rain returned as he topped the times during Saturday qualifying it guaranteed his 63rd career pole position – and a full house for the grand prix.

But a three-tenths margin over Schumacher was not the kind of advantage Williams had enjoyed in years past. And the the well-honed B194 looked a more comfortable drive for 71 laps than Senna’s machine. With JJ Lehto still recovering from neck injuries sustained in testing, Schumacher was partnered by test driver Jos Verstappen. The 22-year-old’s F1 debut was his 53rd car race of any kind, coming just two years after his graduation from karting, and he was almost two seconds off his team mate’s pace in ninth. Damon Hill in the second Williams was 1.6 seconds off Senna, but that was still good enough for fourth on the grid. Like Senna, Hill was grappling with the FW16?s unpredictable handling balance.

There was a similar gap between the two Ferraris. But while Jean Alesi claimed third on the grid a litany of problems on the other car saw Gerhard Berger mired in 17th behind both Tyrrells, a Larrousse and a Minardi. Two new teams had appeared for the first race of the season. The tiny Pacific and Simtek squads brought crews numbering just 21 and 19 to their first event, and each succeeded in getting a single car onto the grid. The non-qualifiers were Paul Belmondo, who suffered a suspension failure on his Pacific, and Roland Ratzenberger, who was unable to set a competitive time during Saturday’s dry running due to an engine misfire.

Schumacher’s starts became a point of contention late in the season as Benetton stood accused of retaining a banned launch control system. But his first start of the season gave no indication of any illegal performance enhancement: while Senna motored off into the lead, Schumacher fell to third behind Alesi. The Ferrari drivers could scarcely believe his luck, as moments before the start his mechanics had been “running in all directions like headless chickens” as an engine failure forced a switch to the spare car. Having got away cleanly, Alesi even took a speculative look at passing Senna but thought better of it, adding afterwards the local would have lynched him had he pitched their hero into the dirt at the first corner.

Schumacher’s Zetec-R V8 engine was widely considered the weakest link in the Benetton package, even though Ford-Cosworth’s unit had won six races the previous season including the final three. Its balance of performance and fuel economy was probably underrated, but for sheer grunt the Ferrari V12 was hard to beat. Illustrating that point, when Schumacher nipped past at Juncao on the end of lap one, the Ferrari blasted back into second place on the long uphill climb back to the pits. But Schumacher only spent one more lap stating at the rear wing of the 412T1. He made the same move next time around but made a cleaner exit and secured the position.

Behind them the field thinned out quickly. A phenomenal start propelled Berger to eighth but his engine only lasted five laps. Gianni Morbidelli, who had qualified his Footwork an excellent sixth, stopped on the same lap, his gearbox having been faulty since the start. Bertrand Gachot and Olivier Beretta had already retired having made contact while trying to avoid Eric Bernard’s spinning Ligier. Senna held his lead over Schumacher at just under four seconds to begin with, but as the expected time of their first refuelling stop approached the Benetton drew closer to the Williams.

Was this going to be the story of 1994? The front of the field had a new look as the blue-white-gold Williams headed the pale blue Benetton. The pair dodged through traffic, kicking up sparks. Schumacher seemed to be biding his time, waiting for an opportunity. The decisive moment came on lap 21 and not on the track, but in the pits. The pair came in together and Benetton’s crew got Schumacher out of his pit box again with the minimum disruption. With no speed limit in force he gave the B194 full power as he scorched out of the bumpy pit lane. He shot past the stationary, who sat with his visor open as his mechanics pumped fuel into the car just millimetres behind his head. Moments later the Williams sped out of the pits in pursuit of Schumacher.

Back on the track Senna found it was all he could do to keep the Benetton in sight. Schumacher set a searing pace – by lap 40 they were the only two drivers still on the lead lap. Five laps earlier a frightening shunt had eliminated four of their competitors. Martin Brundle was leading a three-way scrap for seventh place involving two of the sport’s newest drivers: Eddie Irvine, making his third race start for Jordan, and debutant Verstappen. Brundle had just lapped Bernard’s Ligier when his McLaren’s Peugeot engine threw a flywheel. As Bernard hesitated behind the McLaren, Irvine took avoiding action – and chaos ensued. Verstappen had drawn alongside Irvine just as the Jordan driver jinxed left. The B194 touched the grass and snapped out of control. It slewed sideways, collecting the Jordan and Bernard’s Ligier. Finally it reached Brundle’s McLaren and launched off the rear of the car.

Verstappen’s right-rear wheel dealt Brundle’s crash helmet a sickening blow as the Benetton headed for the sky. Mercifully all four drivers walked away, though a heavily concussed Brundle periodically stopped and crawled as he headed back to the pits. The Safety Car remained on stand by throughout and by now the 26-car field which started the race had been halved to 13. But there was one more retirement to come – and it would be the most surprising of all. Senna had fallen up to nine seconds behind Schumacher following their second pit stops but with 20 laps to go he was making periodic stabs at cutting the deficit. He gained more time as Schumacher spent most of one circuit putting a demoralised, unwell Hill a lap down again.

With 16 laps to go the gap was down to five seconds. But just as the race seemed to be building to a climax, it was all over. On lap 56 Senna’s FW16 snapped sideways at Juncao and stopped. A live heart rate monitor on the television broadcast – which was mercifully absent from later races – registered 164bpm as he climbed from the cockpit. ‘Senna out’ read Schumacher’s pit board as he began his 57th lap. The crowd had got the message as well, and thousands made for the gates with over a dozen laps still to run.

They didn’t miss any major developments over the final laps although another Sao Paulo native, Rubens Barrichello, delivered a career-best fourth place for Jordan. Schumacher won by a full lap from Hill. Alesi joined them on the podium, his hands bloodied by 70 laps of wrestling with his Ferrari. Ukyo Katayama scored Tyrrell’s first points since Suzuka in 1992, and Karl Wendlinger claimed the final point for sixth. The last of the 12 runners was David Brabham’s Simtek, four laps down but classified on the team’s debut.