Alex Zanardi is not a devout man, but as he absorbed the reality of back-to-back Paralympic gold medals he could not help but entertain the idea of divine intervention. “Normally, I don’t thank God for these things – God has far more important matters to worry about – but when I finished and I was told that I had won the race, I thought, ‘This is too much, too much by far,’” he said. “I raised my eyes. I feel my life is a never-ending privilege.” 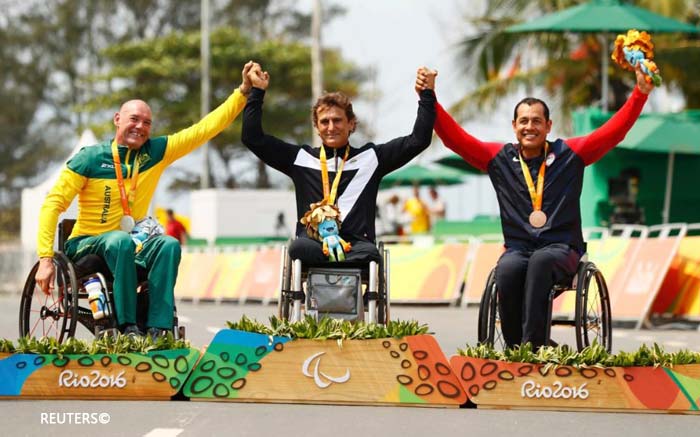 It was a statement to rock those familiar with Zanardi’s story back on their heels. Today, after all, marks the eve of the 15th anniversary of the IndyCar accident that very nearly sliced him in half, drained him of all but a litre of his blood, and inflicted injuries so dreadful that he had to be revived from a clinically dead state seven times. Just to recover from such horrors would be sufficient to render most men religious. To do as the Italian has done, in restoring what is left of his body to peak condition and winning three golds in the hand-cycling discipline that he has made his own, is to offer an object lesson in sport’s power to stupefy.

Zanardi was more contemplative in celebration than in London four years ago, where, in an unforgettable image, he levered himself out of his hand-cycle and on to the stumps of his legs – both of which had needed to be amputated above the knee – before waving the custom-built contraption around above his head. He turns 50 next month, and is uncertain how many more such moments he can savour. “I will be 53 by the time of the next Games, in Tokyo,” he said. “Perhaps I will go there as a mechanic.” The margin of victory in his H5 time trial was more slender than at Brands Hatch in 2012, as Zanardi braved the steamy heat of this beachfront course in Praia do Pontal to beat Australia’s Stuart Tripp by just 2.74 seconds.

But Zanardi, at the halfway point and sensing victory was in the balance, harnessed every ounce of his indomitable racing driver’s will to cement his advantage. It mattered to him, profoundly, that he could taste glory in the land of his idol, Ayrton Senna. Zanardi raced in the same Formula One field as the Brazilian only fleetingly, from 1991 to Senna’s death in 1994, but the inspiration he derived from the experience has never left him. “I followed Ayrton from the end of his karting career,” he explained. “I would tell my friends, when he started to drive cars, ‘Watch this guy, he is going to surprise you all.’ He has always been my role model.”

For Zanardi, the significance of the Rio setting did not end there. Since his appalling accident in Germany in 2001, when Alex Tagliani’s car hurtled into his with such devastating force at the Lausitz Speedway, he has been making a few promises to himself. One was that he should travel with his hand-cycle to this city, where he had secured a pole position in IndyCar’s Rio 400 in 1996 but never won, to see if he could correct the omission on his CV.

“What makes this very special for me is that on the same spot where you have the Olympic Stadium, there used to be an IndyCar circuit, the place where I took my first pole,” Zanardi said. “When it was announced that the stadium would be built there, I said, ‘Wow, I have always loved that place.’ Maybe, I thought, it was time to go back to Rio and win something. Finally, it happened.”

A striking impression given by Zanardi is that he never stops smiling. It can only be supposed that, once you have been read the last rites after a 200mph crash, every day seems faintly miraculous. He shed so many pints of blood at the scene that the doctors deemed it impossible that he would survive. That he has not merely adapted, but thrived, is an affirmation of his heart-rending resilience, even if Zanardi is loath to dwell on his personal ordeal for fear of taking attention from similarly tenacious competitors here.

“My struggles are probably neither more nor less than the other athletes,” he argued. “My name is Alex Zanardi and I suppose that when I want to do something, it is easier than it is for others. On the other hand, there was a day once when being called Alex Zanardi didn’t mean anything in particular. It just meant that I was the son of two great parents who gave me the right education to acquire the tools to prepare my future.

“Now, here I am. I try to take advantage of whatever happens. The life I have today, in which I am very comfortable, is proof that everything is not always 100 per cent good or 100 per cent bad. My accident was the biggest opportunity of my life. It became my greatest chance.”

It is a chance that the Paralympic movement should be forever grateful he grasped. For Zanardi, maimed but unconquerable, has become the embodiment of everything it stands for.